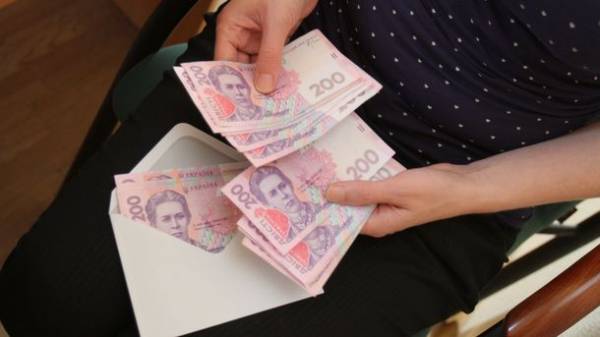 And to catch up with the pre-crisis level of wages in dollars, said Executive Director of the International Fund blazer Oleg Ustenko, is expected to grow GDP in dollar terms. “In 2013 the average GDP in dollars was $ 170 billion, and now 100 billion,” – said the expert.

According to the International Bleyzer Foundation, on average, the GDP of Ukraine in the U.S. currency is expected to grow by 75%, then the average level in the country of salaries could reach pre-crisis $ 450. And there is not enough without structural reforms, reducing administrative pressure on business, creation of favorable investment climate and the system of fight against corruption. Read more about how Ukraine could “catch up” with the European economy, can be read here.

By the way, this year, according to the IMF, Ukraine’s GDP will grow by 2%. “A pace to return to pre-crisis levels, we will need dozens of years. We need to grow at least 5% of GDP per year, but better – ten years China grew by 10% of GDP, then every five years to double its economy”, – said Oleg Ustenko.

At the same time, the analyst of “Alpari” Vadim Iosub calculated that real wages adjusted for inflation at the moment is lagging behind by 14.7% from the 2013 level. “We need the growth in the average real wage from the current level 14.7 percent to return to the level of welfare 2013. The increase in real wages at this magnitude is a challenge for the economy. This requires a comparable growth of GDP and productivity. According to the most optimistic estimates, such growth can be achieved within three years if each year real wages will grow at about 5%”, – says the expert.

Read more about how Ukrainians earn and how changing incomes, can be read here.