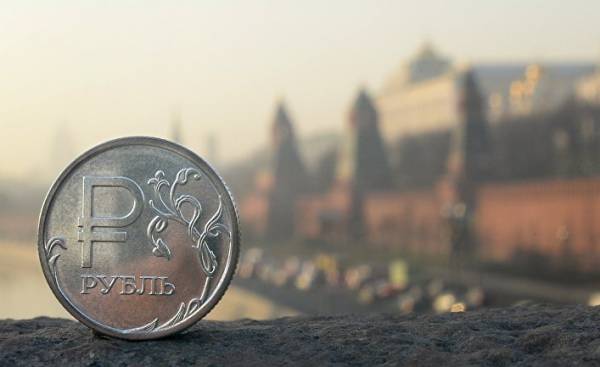 For four months of the new Russian Minister of the economy he has not had much opportunity to draw attention to himself. At his first press conference last week, Maxim Oreshkin has given advice to the Russians, who previously could hardly have been to hear from members of the government buy foreign currency! The Minister explained: “In the coming months, we expect a significant weakening of the ruble.” Company specializing in the import, or the citizens planning an overseas trip, must be able to provide themselves with foreign currency. If the oil price does not change, the Ministry expects a rate of 64 rubles per dollar. Now one dollar is worth 57 rubles.

This call is one of many efforts in which the government and the Central Bank since the beginning of the year trying to slow down the strengthened national currency. In 2016, the ruble strengthened against the dollar by almost 22%. Thus, he was at the international level among the growth leaders, along with the Brazilian real. A rapid ascent was followed by a recession in previous years. In early 2014 the dollar was worth 33 rubles, in the course of the fall in oil prices a year later for 60 rubles, and in early 2016 — as much as 75 rubles.

Advantage — manufacturers can cheaper to sell their goods abroad

The government for the current year budgeted oil price to $ 40. Despite the growing poverty in the country, the excess is not distributed, and invested in currency reserves during the crisis decreased. In addition to the increased oil prices the growth of the national currency contributed to good monetary policy, says Lutz, Karpowitz (Lutz Karpowitz), an expert on Russia from Commerzbank. “The Central Bank in the long run got a lot of confidence.” When the goal was set to reduce inflation to 4%, initially, no one believed. After the fall of the ruble in late 2014, the key interest rate was raised to 17%, then it just slowly descended. “Since the beginning of 2015, inflation declined steadily, soon, she became even below the key rate. However, the Central Bank is slow to reduce interest rates”.

The last reduction in the key rate to 9.75% at the end of March almost led to the decline of the ruble. With the high price of oil in national currency is practically not affected by other factors, he said. When the most important export product of Russia became cheaper, investors nervously began to respond to international tensions. At the end of 2014 has created the impression that it all matched — the price of oil, inflation, sanctions. Meanwhile, increased nervousness. “The lifting of sanctions is not as strong as in volatile times”.

The real income of Russian consumers for the year of the crisis significantly reduced. According to RAS, one-third of the population is on the verge of poverty. A large part of the prosperity which comes at the beginning of 2000-ies in connection with the oil boom, declined. And yet prices are now slowly rising. Russian exports only partly used the weakened ruble. Although the Russian manufacturers can now offer their goods a third cheaper than three years ago. And yet the most important markets — in addition to the commodity sector are the former Soviet republics. But there purchasing power over the years has also declined.