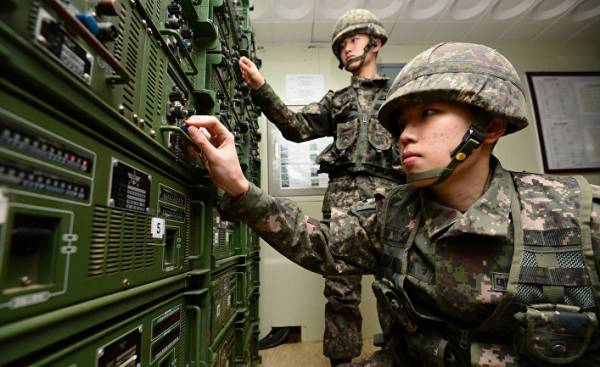 The sudden reversal of the U.S. aircraft carrier “Carl Vinson” (Carl Vinson) in the Western Pacific ocean towards the Korean Peninsula has aroused the keen interest of the public, especially in conditions just suffered a military strike on Syria.

Launch missiles to Syria showed trump’s bold successor to Obama in the use of weapons. Now, many are concerned about whether Washington will maintain the same style in the problem of the Korean Peninsula. Pyongyang rather sharply reacted to the situation in Syria and stated that he “will not allow ourselves to be scared”.

You should pay attention to the obvious difference between the person of Obama and trump, who really wants to stand out and show that he is not like everyone else. Attack on Syria to a certain extent, helped him to do this, as it gave the world a strong signal that he is the Supreme commander of the three armed forces of the United States, is able to resort to arms.

However, traces of returning to the trump foreign policy strategy Obama too much. After three months in power, he is not a “reformer” of American diplomacy. This time America was limited to the launch of a Syrian airbase about 60 missiles from warships, not even using combat aircraft. This method is easiest, and the effect of such a strike point and is quite suitable for precautionary action against the use of chemical weapons.

If such a blow will be inflicted on the DPRK, the effect will be even more of a point, and the danger from it is much more. However, if the United States will cause a “symbolic” attack on the DPRK, it will promptly be able to send thousands of guns and missiles on Seoul, which will inevitably lead to the troubles of the people of South Korea.

The US decision to launch a missile attack on Syria was adopted with lightning speed. The meeting of the Council for national security of the United States opened, trump had the last word, and rockets were immediately released. However, in the case of the DPRK it is unlikely that all will be as easy. The United States will have to think very carefully to ponder and answer one question: what will Washington do if Pyongyang would retaliate on Seoul?

Therefore, the United States will probably not take any military action against North Korea, and if they do, are unlikely to strike only at the nuclear facilities and related military facilities. At the same time, the United States and the Republic of Korea together to carry out “the operation to eliminate the” Pyongyang and deploying big adventure to overthrow its political power, which is very likely to happen in the future.

We can say that if the United States will inflict a military strike on the DPRK, the action is very difficult to control in the “limited framework”. There is a very high probability that this will eventually turn into large-scale killing on the Korean Peninsula. North Korea will pay a huge price, South Korea may also be seriously affected.

Nonetheless, America can still be inspired by the results of the operation in Syria, especially that she is becoming increasingly impatient in relation to the provocations of Pyongyang. Now the idea of application of air strikes on nuclear facilities of the DPRK no longer seems to be the team’s trump so ridiculous. In the normal course of discussion it became a “serious alternative” for which implementation needs only unwavering neglecting all the reason that can be presented in case.

If in such a situation, the DPRK will conduct a sixth nuclear test, this will be the last and the decisive motive that pushed Washington to act recklessly. At least Washington will be able to find a key pretext. The situation this year different from last year, as 2016 was the last year for Obamacare. He adhered to the “strategic tolerance” against the DPRK for seven years, and he had to wait only a year. Trump just came to power. He made a settlement of the nuclear issue of the DPRK priority direction of foreign policy of the new government, and if it in the beginning immediately lose to Pyongyang, he may feel that his authority immediately fall.

According to the news the Council for national security of the United States invited the Tramp to deploy nuclear weapons in South Korea. It can radically change the logic of the nuclear issue on the Korean Peninsula, denuclearization of the Peninsula then simply disappear, and the possession of DPRK’s nuclear weapons will be possible to legalize it. China and Russia can have a sharp resistance.

The DPRK has misjudged the situation, and it can be extremely important in the future. The risks to which it is, you can’t infinitely raise the stakes in the game, which it is. North Korea believes that if it had conducted five nuclear tests, can with impunity hold the sixth. However, if North Korea really decides to conduct a new nuclear test, Beijing to Washington, probably immediately followed by an unprecedented reaction up to serious critical events. At this time the North especially it is necessary to think rationally and reasonably.