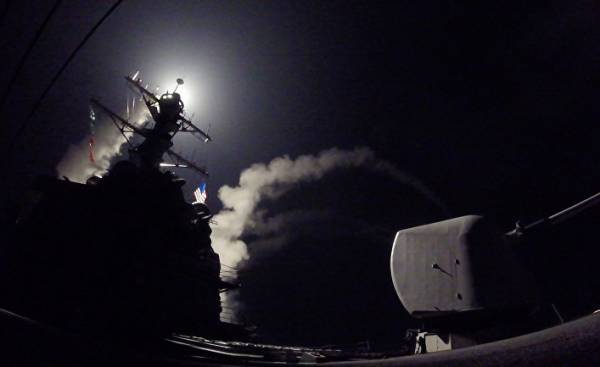 Contrary to expectations, the resumption of use of chemical weapons by the Assad regime, provoked, finally, a retaliatory strike from the United States. After repeated denials from his own words about the policy of isolationism and respect for alliances and the bombing of the airbase of al-Sirat April 6, evidence of the reversal of the American policy in geopolitical interests. This warning shot and the possibility of new attacks perfectly legitimate, if Bashar al-Assad will continue to meet its obligations under the Russian-U.S. agreement on the chemical disarmament of Syria.

Ultimately, the use of chemical weapons in Khan Sheyhun April 4, opened the eyes of the American President, ready yesterday to give the keys to Syria’s geopolitical Alliance of the Moscow-Damascus-Tehran. Of course, accustomed to the harsh realities of the business world, but not to the tragedy of history, trump misjudged the specifics of the world of high politics and its diplomatic and strategic implications. Responsible for harmony within human society and its external security policy has a different essence than the economy. It is not about how to compete for more market share, and to take sovereign action, to be able to distinguish friends from enemies, to anticipate threats before they can cause damage, to destroy what can be destroyed. When diplomacy comes to a standstill, it becomes really necessary to resort to legitimate physical force. Overall, politics and Economics are two different “entities”, there are two activities characteristic of the human race, whose goals and means are different.

Until the last moment it seemed that trump considers Putin as a partner in the commercial sense of the word, as the person with whom he could negotiate and conclude deals. In the end both would win (this is called a positive sum). This assumes that both players have the same vision of the world and one type of rationality. However, neither Putin nor al-Khomeini nor Assad does not share this point of view. They are not fighting to increase their share of the profits to increase the capital of the company, they want to win and destroy their enemies. For them there are games with zero sum and any sincere desire to begin negotiations to avoid the worst-case scenario and to find a lasting solution to geopolitical problems, interpreted as a retreat and a recognition of their own weakness. Purely schematically, trump thought that he could trust Putin, Syria to take on the responsibility for the control of Assad and deter Iran, whose leaders intend to play a leading role in the area from the Caspian sea and the Persian Gulf to the Eastern Mediterranean. But Putin does not intend to abandon the Iranian-Shiite Alliance in exchange for a new “reset” of Russian-American relations. The goal of Russia and Iran is the dominance in the middle East and the expulsion of Western forces from there.

The legitimacy of us air strikes

The US decision to resort to strikes stems from the awareness of the geopolitical realities and overall essence of the policy. Putin is very quickly condemned the “aggression against a sovereign state”. There were good souls who lament about the fact that trump has not appealed to the UN and did not require a long investigation before taking action against Damascus. Not a brilliant eloquence in the recent chemical attack a distant imitator of Georges Marchais (Georges Marchais) condemned the Paris and Berlin of the decision of trump. Anyway, think should be in the first place about what can be considered a sovereign state, the Syrian regime, which ignores all rules (including military law) and creates a threat to the fight against the proliferation of weapons of mass destruction. Such designation can only refer to such a political education that ensures that all primary functions, including civil harmony and the internal security necessary for other important areas (Economics, ethics, religion, aesthetics, etc.). The Syrian regime does represent a wild form of government, which joined in the infernal dialectic with jihadism and plunged the country into a barbaric state.

Statements about contacting the UN and the rule of law, in turn, reflect the shameless cynicism. In the absence of the “Leviathan” of Hobbes on the international level, international law may not have the same filling that internal political order of the nation or community of Nations: humanity is not one big political entity, and the international legal system relies on States ‘ obligations under treaties and conventions. In fact, the practice of veto, which Moscow, Beijing and the supporters would like to reduce international law (chemical weapons Convention, military law, natural law, etc. — all is forgotten), is only a recognition of this state of Affairs. The veto privilege is the lot only of the permanent members of the security Council and opens the way for political arbitrariness, denial of the very concept of law. At the same time, it is provided in exchange for the responsibility of clubs, their international obligation to prevent a war of “all against all”. As said Pascal, “Justice without power is one weakness, strength without justice is a tyrant. Therefore, it is necessary to combine justice and strength. Justice must be strong, and strength is just.” Unfortunately, the systematic obstruction of Beijing and Moscow on the Syrian issue have led us to the current situation.

Isolationism is not feasible

In the end, American strikes in Syria and the geopolitical context to illustrate the impossibility of isolationism, albeit one firmly entrenched in the minds and perceptions. In our interconnected world, which is riddled with technology and is under observation satellites, the international peace and prosperity are in the hands of “poor power”, once she has a weapon of mass destruction on hand. In short, globalization creates unstoppable momentum, including in political terms, the first world power can not abstract from it.

The US and its allies need to undertake sovereign acts and to take responsibility, both in Syria and in the middle or even the far East. The scales are falling, the spirit of Western civilization, its universal fit and care for the world. Yes, we are all sinners and we have committed a lot of mistakes. There is no denying the historical weakening of the West. Nevertheless, while that to it on change came, no one truly legitimate power able to approve a certain idea about the person. So he needs to accept his kind of exclusivity, and to work for the new Western century.

The Times (UK): our contribution to the victory was the Brits say — others disagree