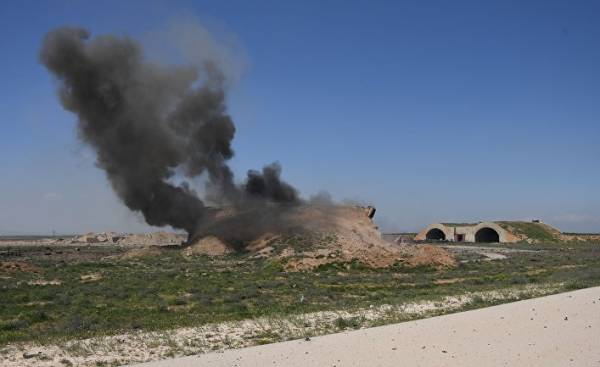 Interesting indeed in Damascus, Tehran and Moscow believed that the chemical attack on the city of Khan shaykhun will get away with it and nothing but talk the West and especially the United States did nothing. Perhaps there are still under the illusion that Washington will continue Obama’s policies and try in the middle East not to interfere. Trump though, and speaks firmly, but still trying to implement his campaign promises. We better get along with Russia — we are better together with Russia. And even recently removed the requirement of resignation of Assad. In General, the weaklings in America and therefore, be ashamed of nothing in particular.

Everything seems to be correct but the error is, as always, is in the third sign. Did not take into account the complexity of the situation trump. He suffered some very significant losses. The courts blocked his immigration decrees, Congress in strong opposition to his tax reform. And not just from Democrats, not surprisingly, but also from Republicans. And here in Syria there is an opportunity to show urbi et orbi, that America is not a joke. She has a ways to explain clearly where the boundary lies.

A sharp turn of American policy and the emergence of it in the middle East, the military component is fundamentally changing the whole system of international relations.

Accidentally or not, not going to guess, but the chemical attack was made precisely at the moment when trump took the Chinese leader XI Jinping. Apparently the talks went quite well, if the Chinese press were numerous comments that all the problems in bilateral relations is completely solvable. As a result, Beijing distanced itself from the support of Russia and declared their neutrality with the call to the parties to peace.

The situation with the chemical attack and the reaction to it differs significantly from the behavior of Western countries after the incident with “the Boeing” in the sky of Donbass. Then got off with words and some sanctions. In Moscow concluded that it would be always viewed this as carte blanche not only in Syria but also in Libya.

Now the Kremlin has not so many alternatives.

Option 1. Continue to support Assad despite the warning from the American side. What will the Syrian President it is hard to suppose, but certainly nothing good. While relations with Western countries and primarily the United States will deteriorate, bringing to the brink of a military clash.

With all the bombast in Moscow are well aware that to compete with America militarily can’t. Such could not go even the Soviet Union in the Cuban missile crisis, although was much stronger (than modern Russia — approx. ed.). Several ships of the Russian fleet in the Eastern Mediterranean sea and the black sea fleet, they look like pygmies against the 6th American.

The Russian Navy was clearly demonstrated by the trip of the aircraft carrier “Admiral Kuznetsov”. And it was against two American aircraft carriers from the 6th fleet, not counting the other ships. Plus aviation and military units of the allied country of NATO members. Where there is the Russian army.

Then go to the military confrontation with Washington, Moscow cannot by definition. At the same time, in the East it will be regarded as a sign of weakness, and there these are not respected. First it will show the current Russian traveling companion of Iran, who hurried to take the opportunity if not to oust Moscow from Syria, it is significantly limit.

Option 2. To phase out military support for Assad and limited military, diplomatic, economic and financial. Advisers to leave, to supply weapons in exchange for the base. This will lead to the already discussed result, only faster. It turns out that the Russian adventure in Syria wound up in a dead-end, and not from a rational output.

At the moment Russia was left virtually without not that of the allies, but no friends. Just don’t rely on anyone. Oddly enough, but it helped “father” Lukashenko to obtain energy supplies at satisfactory prices and the promise to lift the ban on supplies of Belarusian foodstuffs to Russia.

To retreat into Syria at the moment, and for the reason that after leaving the middle Eastern country the pressure on Moscow did not decrease, and will increase even more. And next on the list is Ukraine. A direct connection between the events in Syria, the deterioration of Russian-American relations from the invasion of the Donbass no. However, in some depth it still exists.

In the first place. Wage war on two fronts Russia is quite difficult. Does not have the necessary resources. The internal situation is not stable, as trying to present on the Federal channels. The presidential election is approaching and an urgent need to find money to appease the electorate. A problem with that and they become more and more obvious to many.

Secondly. Further persistence in the confrontation with the West has been the introduction of a new and very painful sanctions. Weaknesses of the Russian state is known to all, and to hit them easily is not. As it turns out, the resolve of Washington has, and it may well infect their NATO allies. Hopes for China either. Tricky Beijing would prefer a high mountain to watch the tigers fight in the valley.

In response, the Kremlin will resort to forming closer to the axis Moscow-Tehran and support the Tehran belligerence of the ayatollahs. How effective this will be remains unclear. The contours of the Moscow response to American action in Syria will emerge after the meeting between foreign Minister Lavrov and Secretary of state Tillerson. In any case, soon relations between the two countries will deteriorate.

The task of the Ukrainian diplomacy is to take advantage of some window of opportunity and attract greater Washington to support our position on the Donbas and Crimea. Such an opportunity seems to have appeared.