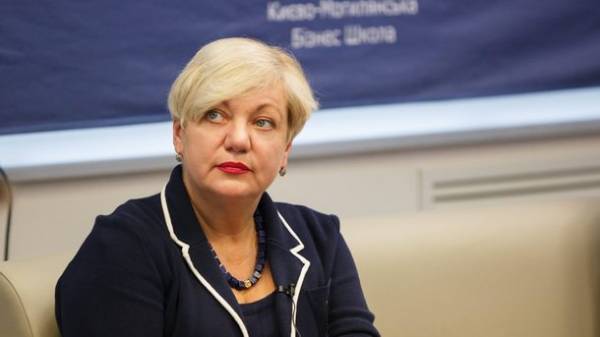 Today the head of the National Bank of Ukraine (NBU) Valeriya Gontareva has officially declared that has written a resignation. To leave the post she intends, may 10. The statement of Gontareva must be signed by the President of Ukraine Petro Poroshenko, after which it will be considered by the Verkhovna Rada. If the Verkhovna Rada will vote for the resignation of the head of the NBU before may 10, Gontareva leaves post according to the decision of Parliament.

Also read: Gontareva declared the results of its “reign” in the NBU

The head of NBU assured that other changes in the composition of the Board of the National Bank is not going to happen. “Also there is no change in the policy of the Central Bank. A floating exchange rate, inflation targeting, modern Central Bank – all those things that my team and I struggled for so long, remains unchanged. … The national Bank will continue consistent implementation of the policy that you have seen throughout my presidency,” – said Gontareva.

The rumors about the resignation Gontareva widened the past few months. Experts talked about the different reasons – from the fulfillment of commitments to the psychological fatigue in a large number of critics in her address, especially because of dissatisfaction with the corporate and banking sector current situation. So, according to political analyst Taras Berezovets, the desire Gontareva to leave the post of head of the NBU can be regarded as an attempt to avoid responsibility for this difficult situation.

Hontareva recent interview with “UKRINFORM”, said that, as head of the NBU fulfilled its mission. At the same time, commenting on his resignation Gontareva said that he does not consider his decision to go political.

“I have always said I wasn’t going to work in the national Bank for 7 years. I was very naive when I thought that we can do in a year. If the nationalization of PrivatBank we did in December last year and in early 2016, I could leave earlier. Reform done – mission accomplished,” added Gontareva.

Economic experts believe that the market will react positively to the resignation of Gontareva. According to the Chairman of the Committee of economists of Ukraine Andriy Novak, her care will contribute to situational strengthening of the hryvnia.

The expert notes that the further the situation of course will depend on who becomes the new head of the regulatorwill present its monetary policy strategy, and in its framework – translation strategy, and what it will be.

“The resignation of Gontareva – positive news. High probability that we’re going to see the revaluation of the hryvnia, because the market has long waited for her resignation. The fact that she was gone, the market clearly have a positive impact,” – said the President of the Ukrainian analytical center Alexander Okhrimenko.

At the same time, the expert said, the fundamental question lies in the fact that the head of the NBU was the person who would think about Ukraine’s economy.

“We need to put the person who will get through this and really think about the economy of Ukraine, and not about how to please the IMF or anyone else,” – said Okhrimenko.

The importance of a successor Gontareva says economic expert Boris Kushniruk. The resignation of Gontareva to the course will not affect in any way, although, amid the joy of this event, the extra stability of the national currency is still possible, he said.

“I would not tie any consequences to the resignation of Gontareva. It is clear that her resignation is largely connected with the fact that she gained a lot of negativity, and any steps already perceived “hostility” in society, despite the fact that many people underestimate, what good was done by the National Bank under her leadership,” he says.

Meanwhile, clearing the dollar on the interbank currency market of Ukraine decreased by two cents in the purchase and not a penny in the sale. As of 12:00 an auction is held with the following quotes:

According to analysts, the auction after the announcement of the resignation of the head of the NBU are quite discreet. “Market participants are digesting the information,” – noted experts.

As it became known, Gontareva three months ago and discussed with President of Ukraine Petro Poroshenko on the possible successors on a post of the head of the NBU. According to the head of the regulator, as the new head of the national Bank, she sees not a policy, and professional in banking. Moreover, she proposed several candidates, but their names remain unknown.

“This position has to work a real professional, banker, technocrat, not a politician. That is my vision, I have proposed several candidates of his successor. But the choice, of course, for the President,” – said Gontareva.

As noted by Sergey Yaremenko, now nobody knows who will replace Gontareva, since this candidate is not chosen from representatives of the banking sector, and on the basis of political motives. Meanwhile, in the information space have already discussed several potential successors to the head of the NBU. According to political analyst Volodymyr Fesenko, among them are the two – Chapter Independent bankers Association of Roman Shpek and Chairman of the Board of JSC “Raiffeisen Bank Aval” Vladimir Lavrenchuk.

“Bacon and Lavrenchuk has a very good reputation. I think either one of these two candidates, either an unexpected option,” – said Fesenko.

The political scientist Taras Berezovets, in turn, relies on the candidacy of speck.
“Speck close to Arseniy Yatsenyuk, has experience in senior positions, so this candidate today has objectively more likely”, – said Berezovets.

However, as I’m sure the ex-Deputy head of the NBU Sergey Yaremenko, while these discussions do not mean anything, as the nomination of the new head of the national Bank will be selected by the President and can be very unpredictable.

“In this post should not be a person with banking experience and senior macroeconomist of the country, – he said – unfortunately, if we stay in the paradigm that we assign a person must be 10 years of banking experience, and it is crucial for his appointment – and exactly what is the basis of the provisions of the law on the National Bank – then we’ll just look at those people who were to be appointed”.

“We have to Gontareva are very negative in a public environment, what is absolutely unfair. Because what she did to clean up the banking system, in my opinion, this is a huge achievement, which is extremely undervalued by society, – said Kushniruk, – Gontareva is a person who performed a very difficult man’s job… that relates to what was spent cleaning the banking system”.

The expert notes that 98% of banks as of the beginning of 2014 were bankrupt – they are real assets were less than liabilities before the physical persons and legal entities. The fact that this information is not understood in the society leads to the fact that the actions are strongly criticized Gontareva, he said.

Itself Gontareva his successor has already warned that it is waiting for political pressure. At the same time, the head of the NBU notes that the NBU’s efforts may be in vain, if we fail to defend the independence of the national Bank.