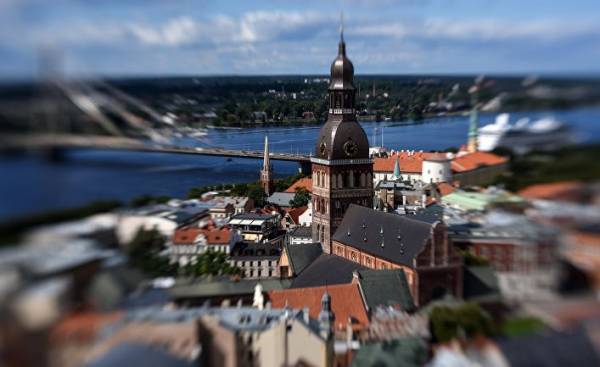 In the politics of the middle level of necrophilia manifests itself as the worship of the cemeteries instead of God — in the creation of the society of friends and the protection of cemeteries. In turn, in politics of Latvia the tendencies of necrophilia are manifested in exaggerated political mania to honor the dead of other countries — the “lame ducks” who care into political oblivion only a few weeks or even days. So it is possible to explain the inexplicable euphoria of the leading political leaders in Latvia and the other Baltic States, when the “foreign policy dead”, who conducted the last days at the post of Vice-President of the USA Joe Biden in August last year visited Riga. And 9 February this year the political leaders of the Baltic States reacted to another “lame duck” — President of Germany, Joachim Gauck, as if honoring their idols of the Papuans, though it was well known that gauck will not be re-elected. And only two days before the triumph of the new President of Germany Frank-Walter Steinmeier, Joachim gauck arrived for the honors of the world in Mecca “lame ducks” — Riga.

Surprising is also the worship of the concerns of some political leaders of Latvia in relation to the recalled diplomats. The Chairman of the Seimas Inara, Murniece was faced with a choice with whom to meet — up with a wandering farewell visits of the Ambassador of Ukraine in Latvia Yevgeniy Perebiynis, or that is accredited by the Ambassador of Russia in Latvia Yevgeniy Lukyanov. The speaker of the Sejm chose to meet with a “lame duck” diplomacy, not with the Ambassador, who, in all probability, worked in Latvia for several years. With Evgeny Lukianov met with the Deputy Chairman of the Saeima Gundars Daudze, head of the Seimas. Perhaps last week, when Latvia was visited by Joachim gauck, the head of the Parliament received an insufficient number of “lame ducks.”

But seriously, the choice of the Chairperson of the Seimas is construed as a blatant and incomprehensible foreign policy of Latvia. This is normal, when political parties (faction) Latvia publicly and openly demonstrate their foreign policy position. However, the Chairman of the Seimas is not the head of the faction of the National Association. The Chairman of the Seimas represents the entire Sejm and, in accordance with the Constitution of Latvia, actually performs the duties of the Vice-President of the state.

Behavior Inara Murniece 14 Feb sharply contradicted foreign policy, which implements the President Raimonds Vejonis. The political leaders of Latvia use contacts with Russian diplomats and politicians to Express the common concerns of the EU about the deterioration of the situation in the East of Ukraine, as well as the General appeal of Latvia and the EU for Russia to implement the Minsk agreements. At the same time, not in the interests of Latvia is needless to aggravate Latvian-Russian relations. On 7 February during the accreditation visit of the Ambassador extraordinary and Plenipotentiary of the Russian Federation in Latvia Yevgeny Lukyanov stated Raimonds vējonis: “We are neighbor countries and get mutual benefit, developing cooperation in the spheres of culture, trade, transport, combating illegal migration and organized crime”.

Unfortunately. losses due to the deterioration of relations between the EU and Russia among all countries of the EU are distributed unevenly. The damage of Latvia in connection with the implementation of common EU policy toward Russia is many times larger in comparison with countries of Western and southern Europe.

This was confirmed by the recent decision of the Russian Federal service for phytosanitary surveillance. The Rosselkhoznadzor has excluded from the list of establishments authorized for export to Russia 21 Latvian company producing products. The right to export to Russia has already lost six Latvian meat producers, two producers of dairy products and 12 fish processing plants. In addition, the Rosselkhoznadzor has temporarily suspended export certificates 44 producing food production companies in Latvia.

This means that after the lifting of the mutual sanctions, the EU and Russia, the return of Latvian food producers to the Russian market will not be easy and simple.