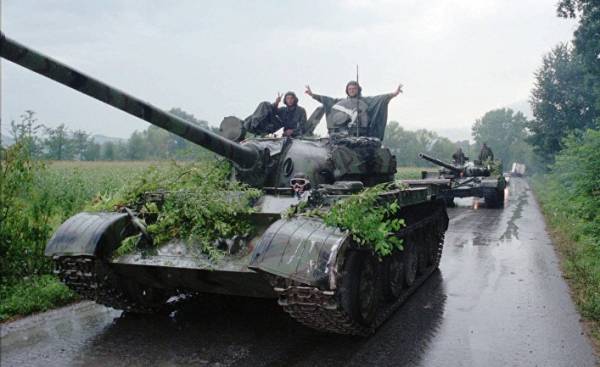 If the Serbs and the Russians handed the Croats and Ukrainians a hand of cooperation or friendship, they generally responded with hostility, banished by the Russians and the Serbs had used violence. Politics of the world, the Croats and the Ukrainians responded with policy of war and confrontation. So are they still just are even more treacherous, hiding behind the idea of “Western values and European integration”.

After just over 20 years after the bloody Croatian operation Storm against the Serbian people, the media had spread the news that Zagreb and Kiev are planning a new “Storm”, but this time against the Russian people.

Andrey plenkovich, who believes the ustasha salute “For home — ready!” a manifestation of “love of country” and “a reminder of Croatian defenders”, the putschist Prime Minister’s initiative Zagreb on assistance to Kiev in the process of “peaceful reintegration of the occupied regions of Donetsk, Luhansk and Crimea”.

Plenkovich believes that the experience, gained by Croatia in the 90-ies during the “greater Serbian aggression” and “liberation” of Krajina, are extremely will help Ukraine and will increase the effectiveness of its attempts to regain control over “regions that underwent a Russian invasion”.

“Croatia does not want to lose at least another Ukrainian,” — said Plenkovich, probably having in mind that it’s better instead of Ukrainians killing Russians, and as much as possible.

Special emphasis in the notorious initiative is on “peaceful reintegration”. Thus the Croats want to form an idea about the fact that Kiev is using and will use “non-violent means” to restore control over the Crimea and East of Ukraine. The Croats, of course, advise the Ukrainian authorities to act as they acted themselves, conducting ethnic cleansing among the Serbs in the Krajina. In the context of the Western policy of double standards, such actions will be regarded as more than “peaceful” reintegration of the territories.

This reintegration will lead to new victims among the Russian population, the flight of thousands of Russian and to continue the bloody armed conflict. After all, we have already witnessed a “peaceful diplomatic solutions to the Ukraine”, where several dozen civilians were burned in Odessa only for the fact that they were Russian. Whether “peaceful reintegration” ominous warning sign that the same fate will befall the Russian in Simferopol and Sevastopol?

As “peaceful reintegration” may be consistent with the Minsk agreements and principles of the United Nations, as is proudly stated Plenkovich, if they de facto ensure autonomy and elements of statehood of Donetsk and Lugansk?

It is clear that Kiev and Zagreb, with full logistical and diplomatic support from Brussels, I want to complete the process of “euroatlantische” Ukraine against the will of the Russian people, who do not want to be part of the new colony of EU and NATO, and who legitimately said this.

The top leadership of Croatia, these ideological followers ustasha, that is, the assassins, and the successors of the Independent state of Croatia of Pavelic, lend a helping hand to those whose politics is based on the same racist lexicon and the fascist methods that for many years, Zagreb applied to the Serbs.

In 2014, the newspaper Financial Times published the news that Croatia offers its assistance in training of the Ukrainian security services and will use the experience gained in the capture of the territory of the Republic of Serbian Krajina. Later Zagreb has also offered to provide medical assistance to soldiers of the National guard of Ukraine, armed formation, which, according to the official description, fights “Pro-Russian terrorists and separatists in the East of the country.”

In other words, the Croatian hospital opened its doors to fighters of anti-Russian paramilitary units, which is fighting a considerable number of members of “Right sector”, convinced the Nazis and admirers of Adolf Hitler. While the national guard goal of terror and expulsion of unarmed Russian citizens with historically Russian land.

Such is not surprising. The Croats are not the first to offer asylum to criminals. Let’s at least remember the Second world war and the years after graduation, when many of the ustashe, whose hands have not dried out the blood of the innocent Serbian children, changed their Nazi clothes for the new, Communist, and overnight turned into zealous proponents of “brotherhood and unity of South Slavic Nations”.

Hysterical in its policy towards Moscow and Belgrade Ukrainians and Croats alike as two drops of water. The contempt and intolerance of everything Serbian and Russian is the meaning of their political existence. The contempt and hatred they have developed as a nation, gained its collaborationist Nazi ideology built on the genocide of its “state”. Without “distilis for Serbs and Russians”: camps of Jasenovac, Jadovno, Yanovsky, Kiev — there would be no modern Croatia nor Ukraine.

Creating his “centuries of national identity” through the distortion of historical facts and the assignment of the achievements of the Serbian and the Russian state, today, Kiev and Zagreb are the most loyal puppet of the West suffering from Russophobia and serbophobia.

Hostility to the Serbs and Russian permeated all spheres of life: political, cultural and religious. Chauvinistic statements discrediting the Serbian and the Russian nation, already commonplace for Croatian and Ukrainian politicians. Often different Croatian and Ukrainian cultural events are only a cover for the outpouring of hatred of Russian and Serbian history. Almost every sport event in Croatia and in Ukraine it comes to manifestations of fascist ideology and cries such as: “Serbs to the willows, the Russians on knives!”

All the historical role of Ukrainians and Croats can be described in one word — vassals.

They were vassals and loyal aides of the West in its attempts to enslave the Serbs and Russians, destroy their Orthodox mentality and eradicate their independent identity. The processes that led to the emergence of Ukrainian and Croatian nation, are nothing but a well thought out political project of the Vatican, Vienna, Berlin and London. Ukrainians and Croats, the instrument of aggression against the Serbian and the Russian world.

They are brothers who share a hatred of Russians and Serbs. The Croats and the Ukrainians can not live otherwise. Even if they try, then immediately cease to be who we are new converts. And Croats, and the Ukrainians suffer from an inferiority complex. In their phobia against the people, from which they went out, they find a cure, and the artificiality of their state. However, by doing so they prove their insignificance. Without Russia and Serbia, the Croats and the Ukrainians will be deprived of the only meaning of existence and any opportunity to stay in the geopolitical arena.