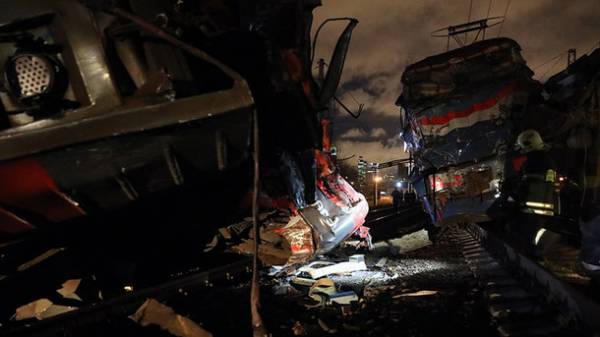 As a result of collision of the train the message “Moscow – Brest” commuter train “Moscow – Usovo”, at the station Kuntsevo-2 in the West of Moscow have suffered more than 30 people. “To doctors for help turned 31 people, 12 of them are hospitalized”, – reported in the medical services of the capital – TASS. All the trains were about 500 people.

The investigative Committee reported about the hospitalization of 16 people. “Due to the collision, was hospitalized 16 people, including the locomotive crew of a passenger train and 2 controller “train”. Work is underway to identify other victims,” – said the representative of the Moscow interregional investigation Department of transport Tatyana Morozova.

Among victims one child, his condition is stable.

It is noted that the driver of the commuter train “Moscow – Usovo” in order to prevent hitting a person applied the emergency brake, which had disrupted normal operation of the braking system of the train. The commuter train followed the passenger train “Moscow – Brest”, the driver of which is also an emergency halt, but the distance was insufficient and the collision could not be avoided. As a result, derailed four cars of the train and the section of the locomotive of a passenger train, suspended in two ways.

Eyewitnesses claim that the train went in reverse and maybe her brakes failed. “The train brakes, we rolled back, I ran through the train to warn passengers to stay or running forward through the cars,” said Dmitry. But, according to him, the train accelerated too much and crashed into a train that was moving behind.

Passengers of the train were not injured, reported the Central suburban passenger company.

“According to available information, in the train there were 20 passengers. None of them was hurt. All passengers left the commuter train and was taken to the nearest station Kuntsevo” – said the Agency interlocutor.

All passengers of the train were evacuated, reported the Main Department of EMERCOM of Russia. “All the passengers were evacuated and are in temporary accommodation”, – said the Agency interlocutor.

More than 170 people are attracted to elimination of consequences.