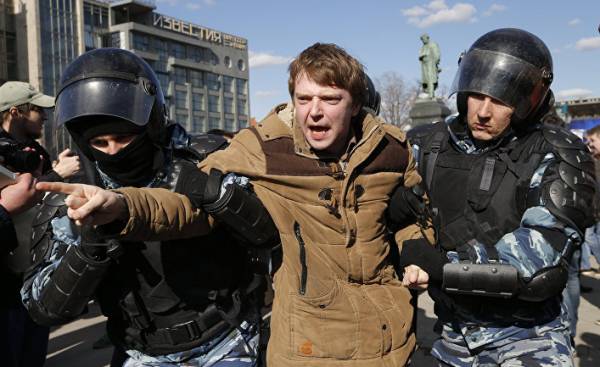 Tens of thousands of people across Russia heard the call of the regime critic Alexei Navalny came out to protest on Sunday 26 March. But the Russian media, these demonstrations are completely silent. More than 700 people were detained, including Navalny himself. Journalist Utrikesmagasinet Lena Jonson describes Sunday’s protests as the biggest in the last five years, but at the same time believes that the liberal opposition is not able to form a political alternative. The government does not allow her to Mature and take on political responsibility.

The most significant protests in Russia in five years took place on 26 March 2017 — on the background suppressed, as the polls show, sentiment in Russian society. This hopelessness is fueled by a feeling that nothing can change, and does not affect your own situation, and the authorities and political institutions to citizens ‘ problems is not the case.

But, despite the fact that the government suppressed the protest movement, strangled the liberal opposition and cut out the liberal voices from the public debate, are still tens of thousands of people in more than 80 cities of Russia have followed the call of the criticism of the regime and blogger Alexei Navalny and staged a demonstration against corruption in the higher political elite. Call Navalny, leader of the Fund of struggle against corruption, according to police in Moscow, I heard seven thousand people, while the employees in Bulk say about 15 thousand participants.

Since 2012, the opposition is in isolation, which seems very difficult to escape. Bulk now managed, raising on the agenda the issue of corruption and the exorbitant requests of the authorities, to Wake up those citizens who themselves feel the burdens of the economic crisis. His videos on Youtube about corruption scams, Prime Minister Dmitry Medvedev in a short time looked more than 13 million Internet users.

Tens of thousands of them followed his call to take to the streets on March 26. Bulk opted for protest a form of “walks” — that is, without slogans and banners, because walking is still not prohibited by law. In Moscow, the demonstrators arrived by metro at three stations, and from there walked to Tverskaya street to Manezh square, and then to Pushkin. But the police treated the “walk” like a rally, only in Moscow were detained more than 700 people.

What the demonstrations mean in political terms? Win it? What do they represent? Can they change the political circumstances? Can improve the situation of the opposition?

The fact that the demonstrations have a symbolic value, undoubtedly. However, they are unlikely to have any direct positive effects politically. In the current situation, they may seem a cry of despair in the desert.

Why “cry of despair”? As said by the reporters covering the demonstrations in Russia, the protests were rather an expression of the General discontent of participants than the open political support of Navalny. The protesters came from different political parties took the opportunity to announce his displeasure in a situation when all other channels for his expression was closed. Elections in Russia do not offer any real alternatives, the media did not miss the criticism, and demonstrations are prohibited.

Why “a cry in the wilderness”? And who listens? Federal, state television and news Bureau chose to silence the news, despite the fact that the Internet was full of information about the rallies. The authorities, however, were perfectly prepared to retaliate. Special police riot buses in large number were present at the venue of the action. In Moscow, they immediately started to clear the Manege and the Pushkin square.

In the framework of the political issues of this type of power is most afraid of mobilizing the people. The problem of corruption brings together a wide socio-economic strata, and there is potential for protest. Even Medvedev has been criticized in the ruling elite, Putin still cannot donate. Can not the power to satisfy any of the requirements of the Bulk, nor the demands of the demonstrators. A year before the elections it can only be hoped that they will manage it all tightly shut up.

But the opposition? What the demonstrations mean for the opposition? The brutal truth is that the liberal opposition lacks both ideological and institutional framework, and so she can’t take this sudden mobilization.

The liberal opposition, as before, is highly fragmented. The only possibility of unification occurred on the anniversary of the assassination of the liberal politician Boris Nemtsov. The opposition can not agree on common candidates in the elections, which could provide them a greater chance to enter in both the Federal and local popular representation.

More importantly, the opposition is not yet able to formulate an alternative policy of the government and the President. The opposition knows opposes, but can not form a political programme and thus become a political counterweight. Former liberal Finance Minister Alexei Kudrin is, of course, a very important work in the Committee of civil initiatives, where there are serious research and discussion in search of a liberal policy alternatives. But this is not enough.

Russian people will not rise up. And the question remains: who will be able to grasp and use this cry of anguish sounding in Russian political wilderness? If liberals will not permit use of popular discontent, will not make it far right?