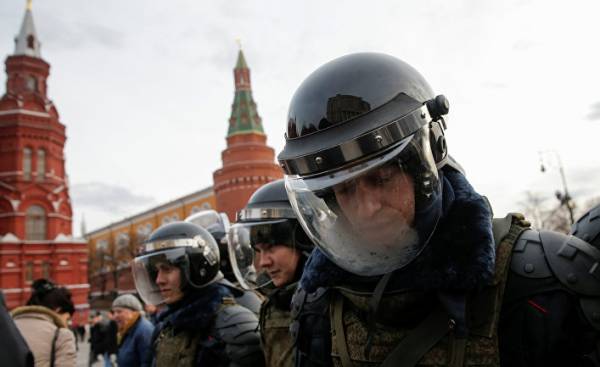 On Monday, tragedy struck the St. Petersburg, the second largest city of Russia and the former capital: a suicide bomber blew himself up in a Packed subway car, killing 14 people and wounding dozens of people. The terrorist act was especially damaging to the morale of Russians, because St. Petersburg has managed to avoid the worst of the attacks that survived the Moscow and Russian hot spots in the South after the collapse of the Soviet Union.

But in addition to conviction of the ineffectiveness of efforts by Russian security services in the fight against terrorism, the attack also forced the media to look for scapegoats. The media in Russia — particularly the most influential of the three main national TV channel — not only predominantly owned by the state, but are under the strict control of the administration of President Vladimir Putin. Thus, the coverage of the explosions became an exercise in flexibility, and the usual harsh reaction of the Kremlin is already causing anger.

However, so far the reaction of the state media on this attack was more restrained and less paranoid than usual. Perhaps this is due to the relatively small number of victims compared to the tens and hundreds died in the terrorist attacks earlier (a similar explosion in the Moscow metro in 2010 killed 41 people). Or, perhaps this is due to the fact that the Kremlin is planning to review its media strategy, because it recognizes that the current is too remote from the interests of the people.

No doubt there were excesses, none of which were particularly specific to Russia or the Russian media: in the first hours after the explosion, there were conflicting reports about the number of attacks, victims and affected areas. One of the private TV channels, close to the Kremlin, hastily published a fuzzy photograph of a man in a long black robe, head-dress, with a long beard, and called him an “alleged terrorist.”

This man was an ethnic Russian, who recently accepted Islam, he saw himself on television and voluntarily came to the police to prove his innocence. But even after he was cleared of any suspicion, the reporters of the tabloid, which called him a “suicide bomber in a skullcap”, despite the withdrawal of any charge, continued to haunt him. They stopped a man to get on a plane to St. Petersburg, scaring an innocent man, trapped by a ruthless media machine looking for the sensation. Of course, this happened not for the first time in the history of media and terrorism.

However, all week even reports on state television was balanced — in the coverage of avoided escalating the panic, telling stories of the lives of victims and praised the compassion and fortitude of the citizens of St. Petersburg that was offered for free to drive people into paralyzed after the attack the city. State media did not Express wild theories, but this came from the opposition. They are composed of conspiracy theories, wondering who benefits from the attack. Remember 1999, they said, alluding to a series of apartment bombings in Russia before the first term of Putin. Despite the fact that the participation of the state security services was never proven, the attacks actually helped Putin consolidate public opinion, to boost ratings and justify the second Chechen war.

However, increasingly there are questions that still have not touched the state media and officials. Many repressive laws that suppress a free press and civil society, introduced in recent years, represented as the “anti-terrorist” or “anti-extremism” measures, but they failed to prevent this explosion. Previous attacks in Moscow and in the troubled North Caucasus region carried out by local residents, unhappy with the Putin regime after two brutal wars in Chechnya. The relative calm of the second half of this decade, according to the article, the former editor of the Moscow Times Nabi Abdullaev, due to the great responsibility of those local residents that have homes that can destroy Ramzan Kadyrov, unchallenged dictator of Chechnya, and families who may be subject to prosecutions. He can take them hostage to prevent future rebellion.

But what about the perpetrator of the attack in St. Petersburg? Investigators have confirmed that he was born in the neighbouring former Soviet Republic of Kyrgyzstan and was a citizen of Russia. (This detail has irritated even the most persistent supporters of Putin, such as the chief editor of RT Margarita Simonyan. Ethnic Russians, who are not lucky enough to be born outside of Soviet Russia, will spend long time, overcoming bureaucratic obstacles to get permission to stay in the country now, not to mention citizenship. But this is easily got in the country?) When and how did his radicalization? Did this campaign in Syria?

Questions appear, but to respond to them no one, because the system of media control in the Kremlin too rigid and clumsy. The main topics, especially complex political, should be approved. Therefore, some of the leading experts and this week decided to do everything possible to accuse friends of “demons”: the secret “Islamists”, “West” either own opposition in Russia. They also praised the President trump, one of the first called Putin and expressed their condolences — as if it could be consolation for the families of the victims, and again accused the West that he is too insensitive and cold to the suffering of Russia (the Brandenburg gate in Berlin was lit in the colors of the Russian tricolor in commemoration of the victims of the terrorist attack, as it is usually done after the atrocities in other cities).

Then came the “grief police”, bearing recent tragedies: identify “disloyal” — those with a lack of respect for the tragedy and shamed on national television. “Russia”, one of the two largest public media companies in Russia has allocated a segment of time for discussion of tweets and other messages of opposition politicians and journalists in social networks. Alexandra ivy, the radio host ridiculed the assumption that the laying of flowers to the Leningrad obelisk near the Kremlin wall was not so spontaneous and real, as it was presented on state television. Later, it turned out that ivy is right: those young people with the same bouquets of carnations were members of the youth wing of the ruling party of Russia.

This chaotic reaction — not only the recent crisis of Kremlin spin doctors. When March 26 all over Russia swept by massive protests against corruption, the Kremlin’s media managers have not coped with their lighting, first trying to hide the news on national television. A week after the independent media and bloggers have successfully documented the events, state television finally broke the silence by giving a ridiculous explanation like “we are covering the protests last week, because the American media ignored the Occupy Wall Street campaign.

The Kremlin believes the uncontrolled media and the official opposition threat, but the detectives Putin also believe that the threat is in itself a civil society. That is why in the past even serious Patriotic movement reoriented to serve the plans of the Kremlin. At this time, so it is with “anti-terrorism rallies”: have already been reports that the authorities plan to organize them in a conventional way to bring buses to the unwilling but helpless public servants and to support them attracted people for 400 rubles and members of the “youth movement”. But many Russians, especially the residents of St. Petersburg, I think it is an insult to their sincere sorrow. Ekaterina Vinokurova, a journalist, who told about the consequences of the attacks on independent news portal Znak.com called these meetings “the locomotive of fake mourning” in rashawnna post on Facebook and urged Putin, native of St. Petersburg, to respect the feelings of their fellow citizens.

All signs point to a great confusion in the Kremlin offices. Dissent is growing, and this time it’s more social and political issues, and therefore it is more difficult to manage. And new, unknown forms of terrorism are a threat not only to the security of the state, but the usual methods of news coverage.