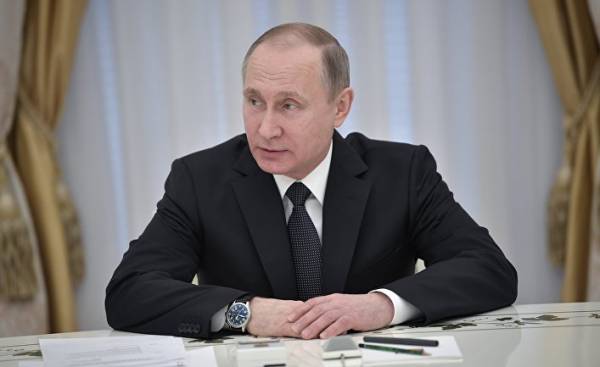 After the tragedy in Khan shaykhun Russia proved to be extremely in a difficult situation… According to the official version, Vladimir Putin and Bashar Assad, there is no disagreement and disputes over diplomatic precedence: a United front against “terrorists” on Syrian territory and a strong Alliance against all foreign forces (the international coalition), which tend to divide partners.

So, 20 Oct 2015 the Syrian leader visited the Kremlin, which was his only overseas trip since the war began in 2011. The meeting was kept secret until the return of Assad in Syria and cemented started a few weeks before the Russian military intervention in Syria, which was gaining momentum before the surrender of the rebels in the East of Aleppo in December last year. It seemed that the axis Moscow-Damascus won: Putin used the vacuum which was created by the errors of the Obama administration and the impotence of the Europeans, and brought the country back to the center of the game-without it, a settlement of the middle East chaos was truly impossible.

Embattled Syrian regime, which so far has not been able to defeat the rebels, was for a time saved. Anyway, calm hid tensions with a third partner, Iran (and his henchmen from Hezbollah), which fought on the side of Assad long before Russia and considered themselves affected by the agreement Putin and Erdogan in the summer of 2016. After a period of disagreements, the Russian leader and the new Turkish Sultan realized that political reconciliation is in their interest: it will strengthen international ambitions and quest for regional domination of the second. As a result, they came to such unpleasant for Iranians, “the Syrian solution,” Erdogan blocks the way to the rebels in East Aleppo, and Putin opens a corridor for the departure of the jihadists from the besieged city.

Since then, the balance of power is still fragile. Although Moscow does not want to provoke an ally in its “natural habitat” at the border, where the Kurds are presented Erdogan a major threat, cannot be and speeches about how to loosen the reins during the offensive on Raqqa, the last Bastion of the “Islamic state” (banned in Russia as a terrorist organization — approx.ed.). Whether it is fighting rebels or ISIS, Putin wants to keep the situation under control and decide the future of the “new Syria.” And in his view it does not mean that Assad must necessarily remain at the helm.

In fact, if you believe the former President of Finland Martti Ahtisaari, Russia since 2012 considering the prospect of its imminent departure. Then former UN special envoy for Kosovo met with permanent representative of Russia Vitaly Churkin, who gave him a project about voluntary leaving of the President after talks with the Syrian opposition. Nevertheless, most Western governments have not tried to develop it. “Nothing was done because they, like most others, thought that Assad overthrown in a few weeks. That is, they felt that to take any steps not needed”.

Further developments well-known to all: hundreds of thousands dead, millions of refugees and military intervention of Russia (an unprecedented case after the Afghan fiasco). Whatever it was, the intervention is limited in time, as Vladimir Putin has consistently reflected on further developments, as he reminded Syrian counterpart 20, 2015: “Long-term settlement can be reached through a political process with the participation of all political forces, ethnic and religious groups. And ultimately the final word, of course, must be solely for the Syrian people.” In other words, Assad will leave, but only when Putin decides who is not going to pay attention to the demands of those who considers it a precondition for negotiations.

Will change the balance of forces is the massacre in Khan shaykhun and the unilateral actions of the USA? Russia has repeatedly condemned for the brutality of the intervention in Syria, and now she was as ever in a difficult situation due to the frames that end without spinning on TV and in social networks. Vladimir Putin will have to solve both a complex and a simple task: to go for small concessions in the UN security Council not to jeopardize played out of position. Really, even if it takes to accelerate the departure of Bashar al-Assad?