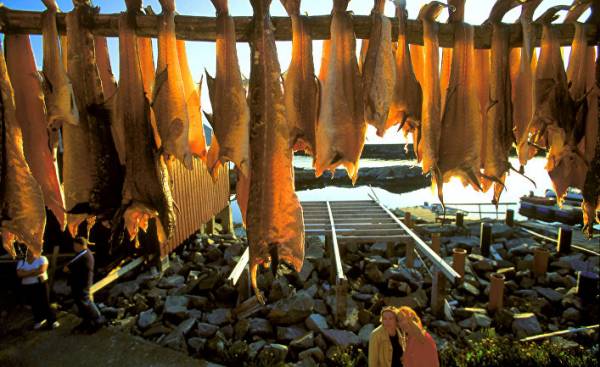 “The world must be pretty damn happy with the fact that Norwegians are so few,” says rune Ortin Rafaelsen, leaning forward.

Forget the Minister of foreign Affairs børge Brende (Børge Brende) and Prime Minister Erna Solberg (Erna Solberg). The representative of the Labour party Rafaelsen, head of the commune Sør-Varanger, is the Norwegian politician who cooperates a lot with the Russians. Partly because the municipality, which he directs, is bordered by Russia, but mainly because it is, in his opinion, is advantageous for Norway, economically and from a security point of view.

“We have to be smart in relation to Russia. Here we need not the foreign policy that we do in other places. Norway has only one foreign policy challenge. It is in the North, and this challenge is Russia, so we should have good relations”, — confidently declares Rafaelsen.

He believes that now is the time to intensively develop cooperation with Russia.

Last week the Minister of foreign Affairs Brand visited Russia and Arkhangelsk for participation in the conference on the Arctic. The foreign Minister appeared on Russian soil for the first time after 2014. In that year, Russia using military forces annexed the Crimean Peninsula from Ukraine.

Since then, the political climate between Norway and Russia has come a severe cold, but most of the already existing cooperation with our neighbor to the East has been preserved. In areas such as fisheries, environmental protection and issues about the Arctic Norway and Russia have been cooperating for a long time. Particularly successful was the cooperation on fisheries in the Barents sea.

In February in an open letter to the Russian Embassy, addressed to Norway, Teimuraz O. Ramishvili sharply criticized the foreign policy of the Norwegian authorities in relation to Russia. At the same time, the Ambassador was invited to dialogue and stressed that relations between Norway and Russia “deserve” more cooperation. He repeated the invitation in a letter published in Dagbladet in March.

Where it is possible to achieve the best results, and areas of Norway and Russia can cooperate?

“I don’t see the obvious failures in the Norwegian-Russian cooperation, but for further development there are great opportunities. Especially in the business sector,” says Lars Rowe (Lars Rowe), senior research fellow, Fridtjof Nansen Institute (FNI) and a specialist on Russia.

He believes that the Barents cooperation since 1993 between Russia, Finland, Sweden and Norway, which aims to ensure security in the North has made a positive contribution. But not so good at is dealing with a major and ambitious project to develop a joint region for business cooperation, said Rowe.

If not for Western sanctions against Russia after the annexation of Crimea, the presence of Norwegian business in the country could be more. The Russian economy desperately needs foreign investment. The potential winnings are huge but justified fear of risk prevents many potential investors, says Rowe.

“Reliable functioning of the Russian legal state with rules that protect your business and the confidence that the law is applied equally for all, necessary for risk assessment was in favour of investment,” — said a senior researcher.

Last summer, Norwegian businessman Atle Berg, Director of the company Ølen Betong, the Russian security service FSB was accused of espionage. Berg was denied entry to Russia for ten years, and he fears that his company and the assets can disappear.

Possible cooperation in the field of energy

Further development of the already existing cooperation in the field of environmental protection between Norway and Russia and conduct of energy policy in the interests of both countries, said researcher Norwegian Institute of international Affairs (Nupi) Godzimirski Jakub (Jakub Godzimirski).

“Vladimir Putin said in late March that the effects of global warming will take place regardless of what we do and what is important to find a way to live with it. Norway and Russia will have to overcome the same difficulties in the North,” says Godzimirski.

Although in many areas Norway can be considered “dwarf” in comparison with Russia, however, it is possible to consider both countries relatively equal in energy.

“Cooperation in the search for new opportunities to limit negative effects from the use of fossil combustible substances — is also one of the areas where Norway and Russia can find common language,” says Godzimirski.

In his statement at the end of March, the Russian President called for the implementation of joint oil projects in the Barents sea. “In such efforts, Russia is also completely dependent on foreign companies,” — said a senior researcher at the Fridtjof Nansen Institute.

“Russia needs investment to start such projects require partners who can share the risks, and last but not least the technology needed for such activities,” says Rowe.

Western companies have the capital and technology.

“Therefore, there is no doubt that future development of oil production from the seabed will be very relevant for Western oil companies”, — says the researcher.

Cooperation in the oil industry

Municipal policies Rafaelsen believes that Norway should try to cooperate with Russia in oil production in the Barents sea. The larger and more complex the cooperation, the better, said the representative of the Labour party.

“What is most important for Norwegian policy in the area of security? If we do not, others will do so, and of course, that will be the first of a neighboring country,” says Rafaelsen.

Policies the Working party is confident that the regional cooperation with neighbors in the municipality of Sør-Varanger and in the whole region of Finnmark in Russian left a good impression.

“If Vladimir and Olga not bothered about Ola and Kari, and Vice versa, relations between Russia and Norway would not be so good at that time. Today it would be impossible to sign such an agreement,” says Rafaelsen.

To extend a hand of cooperation immediately after the Russian annexation of the Crimea was unthinkable for those in power, the Norwegian rulers.

“We ought to be in Russia in 2014,” says Rafaelsen. He believes that glacial period between Norwegian and Russian political institutions continues too long.

Dagblandet: Despite the annexation of Crimea, in violation of international law?

Rafaelsen: We preach international dialogue. Isn’t that true for us too? Now, three years later, everyone is talking about the fact that dialogue is the right thing to do. We have dialogue with many countries that violate international law.

Meanwhile, researcher at the Norwegian Institute of foreign policy Godzimirski opposed to the cooperation at any cost. At the same time, he comments positively on balance in an open dialogue.

He also believes that the seemingly simple invitation of Putin to cooperate in the oil industry in the Barents sea is not as easy as it seems.

“It is also a way for Putin to tell the West that Russia has a lot of what it has to offer, but then the West will have to first have something to do with the sanctions.”

It looks like there will be just as difficult to agree as it was with the delimitation in the Barents Mora.