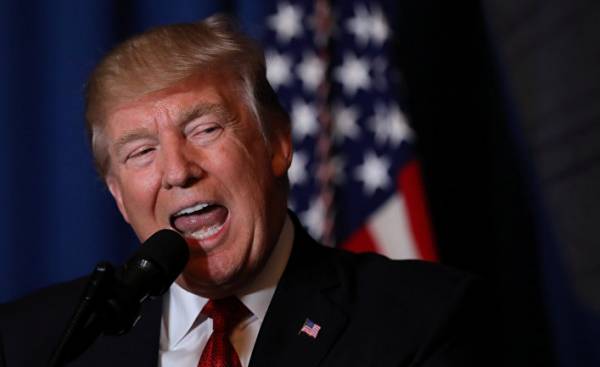 Still, the CIA/al-Qaeda (al-Qaeda is banned in Russia) managed to force the administration to trump a change of policy under the title “Assad is not a priority” to open war against Syria. The fact that this was necessary, were, with very high probability, staged a “chemical attack”. The military success of the foreign Legion of the West in Syria in the last year was miserable, and after the liberation of Aleppo, the West had to go on the defensive.

Trump criticized Obama’s war in Syria and said that I would like to join with Russia to fight against ISIS (an organization banned in Russia). This was in complete contradiction with the policy of war pursued by the U.S. and Israel. Obviously staged chemical attack turned everything on its head.

“Today I call on all civilized Nations to join us in the quest to end the slaughter and bloodshed in Syria and terrorism of all types and kinds”.

On Thursday, Secretary of state USA Rex Tillerson (Rex Tillerson) signaled a sudden change in the administration’s policies trump, saying that Bashar al-Assad (Bashar al-Assad) should not play any role in the future of Syria. Just last week, the US representative to the UN, Nikki Haley (Nikki Haley) stated that the removal of the Syrian President is no longer a priority in Washington.

The New York Times writes about the US attack on Syria:

The United States fired dozens of Tomahawk missiles at the air base in response to a chemical attack by the Syrian government this week, which said us officials, killed more than 80 civilians.

The first time the White house gave the order to conduct a military operation against the armed forces loyal to Syrian President Bashar al-Assad.

According to reports, the United States launched 59 cruise missiles at Syrian airbase. This is another attack, which the United States committed in violation of international law. Western leaders and most of the media, of course, to unite around a trump. Some time it was feared that he would not continue a policy of war, the CIA /Hillary Clinton (Hillary Clinton). And so the war came.

And again we see how the media killed, we see that the war depends on who has the power of information. Winter behind the scenes of Hollywood with the CIA was awarded the “White helmet” Oscar, and this organization again appeared in Idlib and created a tale that was necessary to start a new war.

In August 2013, Barack Obama (Barack Obama) has postponed indefinitely the planned attack on Syria after receiving the report about the gas attack that was probably carried out not by the Syrian army. Donald trump (Donald Trump) did not wait for any analysis, and immediately went on the attack in complete contradiction with the stated policy.

Now probably true of the military-industrial state, which exists in the US, became the war that was trying to start. And need no illusions — this war has the potential to become a new world war. Negligible need for the United States and Russia entered here is in direct conflict with each other.

Trump has decided to wage a war at a time when he had a meeting with the head of China XI Jinping. The Chinese reaction is not yet known. But President XI must take this as extremely offensive action against China. When the Declaration of war by the tramp he was sitting like some wall decoration.

U.S. Secretary of state Rex Tillerson threatened Russia, he said that the country should “think again” before providing aid to Assad.

The US representative Nikki Haley did something very reminiscent of the behavior of Colin Powell (Colin Powell) at the UN in 2003: in the Security Council, she got up with photos of alleged victims. Vial Powell was a fraud, and pictures Hayley has nothing to do with evidence.

In 2013, the head of the Commission of investigation of the United Nations Carla Ponte (Carla Ponte) said there is evidence that chemical weapons in Syria used by insurgents. Obviously, the jihadists could do it again. But war hawks not currently at risk to carry out any investigation, is able to disrupt their game. Every leading psychological warfare knows that it is about to hot pursuit to convince public opinion of the rightness of his point of view. What happens then is less important, it can be hidden and publish in very small parts.

Deputy Prime Minister of Syria Walid al-Muallem (Walid al-Moallem) 6 April 2017 said that Syria has not used and will not use any chemical weapons, writes Sana.

He also said that the Syrian branch of al-Qaeda Dzhebhat al-Nusra (banned in Russia), ISIS and other terrorist groups continue to have chemical weapons in their arsenals.

For the first time in six years of war in Syria, the US made a direct attack on a Syrian military base. Serious danger of further escalation that leads to full-scale war.