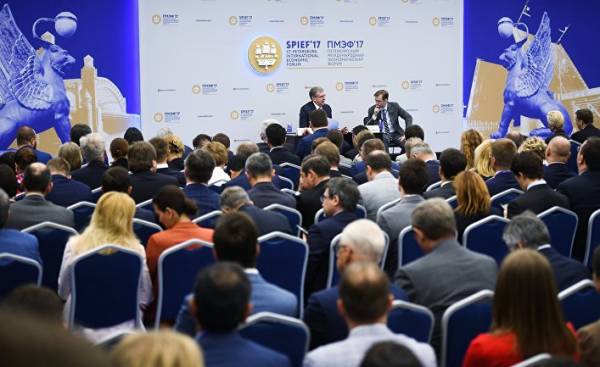 Saint Petersburg is the First day of the conference belongs to him, the most faithful to the revolutionary Kremlin. 56-year-old Alexei Kudrin for ten years was Finance Minister of Vladimir Putin. In September 2011 he resigned, however, continues to be a “team member”, as it was once formulated by Putin.

Listeners who do not have enough seats in the hall, standing along the walls. Among those present many high-ranking officials, Ministers and their deputies. What they hear, is not particularly flattering — Kudrin jokingly suggests that the state tax system reminds him of the chaotic militia, without discipline and without a strategy.

Kudrin and Putin know and appreciate one another since working together in the city government of St. Petersburg in the early 1990-ies. However, after the resignation of Finance Minister Kudrin occupies a special position. A few years ago, during one demonstration even opposed the policy of the Kremlin. However, in the beginning of 2016, Putin gave him the instruction associated with the development of reform plan for the period after the next presidential election in 2018.

Putin regularly listens to Kudrin. But the question is, if he is guided by what he says Kudrin. Kudrin gives a bleak assessment of events. “We are lagging behind the rest of the world,” he says. According to him, Russia should adapt to international market requirements and to “find their place in the global division of labor.” He believes that this is possible only in case if Russia will establish peaceful relations with foreign countries. “Need a new foreign policy,” Kudrin stressed. Otherwise Russia expects economic “lost decade”.

More specifically, another plan. After the annexation of Crimea in 2014, Russia’s economic performance dropped almost to 2007 level. The recession in the Russian economy continued for eight quarters. In 2017, the economy is once again increased, however, according to IMF forecasts, it will not exceed 1.5% this year and in subsequent years will not exceed 2.5%.

Kudrin wants to change that, however, his reforms would represent a radical break with the ongoing economic policies. That’s what he wants to do the former Minister:

— freeze on the current level of pensions and increasing the retirement age;

— to increase spending on education and health;

— to reform the courts.

This is not the first liberal reform plan in the field of economy, suggested Putin. Economic plan Herman Gref, in the first presidential term, Putin was implemented on 35%. The initiative of Elvira Nabiullina, who currently heads the Central Bank, fell under the millstone of the financial crisis of 2008, as proposed by Medvedev “Strategy 2020” gradually disappeared.

Alexei Kudrin is optimistic. According to him, the President probably can not implement, but “70%” of them will no doubt be implemented.

In the Russian economy in recent years, it was possible to observe two tendencies which seemed to contradict each other. On the one hand, improved the investment climate. Russia moved up 80 places in the rating of the world Bank, and now occupies the 40th position. However, the niche in which you can successfully operate private businesses, it is becoming less, while large state-owned companies account for 65% of the economic indicators.

The reason is that Putin relies on two groups that are hostile to each other. The Bastion of liberal economists since the arrival of Putin to power in 2000, are the Ministry of Finance and Ministry of economic development, as well as the leadership of the Central Bank. Their professional skills are recognized and in the West, and Kudrin, for example, several times was named “Finance Minister of the year”. These people advocate for fiscal discipline, for modern policy of the Central Bank on the Western model, and minimum state intervention.

They are opposed by representatives of Russian state corporations, many of which, like the head of Rosneft, Igor Sechin, came from the ranks of the Soviet secret service KGB. Liberal economists want in the near future to sell these state companies. While the hardliners are going to access the foreign currency reserves of $ 400 billion, which were formed by the Ministry of Finance in case of adverse times.

Putin has never followed unreservedly the advice of any of these groups. He, apparently, is more like when they are both holding each other.

Reformer Kudrin makes his opponents angry. His proposals represent a “program of the Washington leadership,” said Sergei Glazyev, a conservative economist, not hiding his dissatisfaction.

Plans for pension reform, Kudrin caused an uproar, because pension payments are not expected to increase until 2035, but increased the age of retirement. Currently, he is 60 years for men and 55 years for women.

In addition, the term “privatization” still causes a sharp reaction in Russia. However, the majority of Russians understand that state corporations are managed is far from ideal. Only 9% of Russian companies produce a year to market a new innovative product, then how in the world this figure stands at 40%. However, the Russians still fear the return of chaos, as it was in 1990-ies, when the oligarchs appropriated the best parts of the Russian economy and destroying other firms.

Besides, Kudrin has now got a competitor. Billionaire Boris Titov also has developed a reform plan for Putin. “Growth strategy” — as he called his project. From Titov also have good contact with the Kremlin — he is the Commissioner of the President on the rights of the entrepreneurs, and the recent parliamentary elections he headed the list of liberal economic party, which was to take away votes from the opposition.

Titov also presented its plan at an economic forum in St. Petersburg. It is much closer to the position of the state corporations. The government, in his opinion, should develop a conjunctural program to billions of rubles, which should be financed by new debt.

According to Boris Titov, the Central Bank needs to change its cautious stance, he needs to pump money into the economy and artificially keep the ruble at a low level — in this case, the export campaign will have economic benefits. According to the authoritative newspaper “Vedomosti”, Putin was presented both these plans. However, there is no information about the decision. And the President’s speech, which he delivered on the second day of the forum does not allow to make any conclusions. In it the word “reform” was not uttered even once.