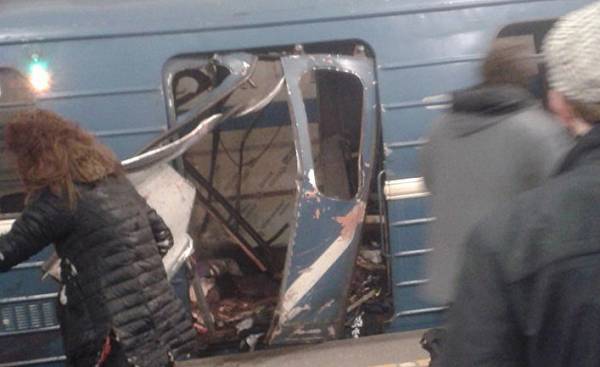 Saint-Petersburg the attack occurred. According to official figures, the explosion in the subway killed 11 people and dozens wounded. Twitter users offer my condolences to the Russians, ask the question on national and religious affiliation of artists, and discuss how the incident will affect the policy of the Russian authorities.

It’s shocking to see the lack of solidarity on Russia. The world froze after the attacks in Paris and Brussels?#PrayforSaintPetersburg

“Photos of lost lives and injured people in St. Petersburg can break your heart. We want to pass on their condolences to the Russian people. We — together with you in the fight against these extremist groups, which continue to cause senseless harm to innocent people”.

Sad news from St. Petersburg. I hope the perpetrators will be found and answer on the merits of this contemptuous act.

The explosion in St. Petersburg, was very close. This world is a strange place.

Explosion in St.-Petersburg will hit the bins Putin and make Russia more of a totalitarian.

Why do people still say that terrorism has no religion?

I wonder will it follow behind the terrorist attack a decree banning all demonstrations in Russia?

The terrorists chose their sacrifice is not the bear — the answer will be very strong.

Very sad news! We must remember that terrorism has no religion. Wake up already, people, Muslims blame stupid!

Explosion in the St. Petersburg metro is a terrible reminder of how terrorism is close to Finland. For many Finns of St. Petersburg is closer than Helsinki.

Can now anything to undermine Putin’s support is stronger? Just asking.

Nowhere to be seen “je suis Saint-Pétersbourg”. Why?

Putin is an authoritarian. The response will be, and I assume soon. #StPetersburg

Somebody will definitely pay a very high price, but it is unclear whether it is guilty…
#stpetersburg

Don’t you think it’s bad form to speculate on the subject, will the terrorist attack in favor of Putin, just after he killed and injured innocent people?
#StPetersburg

Wait, now Putin will see the connection between St. Petersburg by a terrorist and Sweden. #StPetersburg #SWEDEN #IS that’s when the thunder clap….

The bomb exploded in #StPetersburg #Russia! It is unknown who is to blame: Muslims, Ukrainians, or perhaps pigs from the opposition

Terrible news about the explosion in St. Petersburg. My thoughts are with the victims and their families.

A terrible terrorist attack in the subway of St. Petersburg. A lot of victims. Who’s responsible?

I want to Express the solidarity of myself and on behalf of the Parisians to the victims of the explosion in the subway of St. Petersburg.

The attack in St. Petersburg: it would be interesting to know whether Anne Hidalgo @Anne_Hidalgo to give the order to turn off the lights on the Eiffel tower, or to cover it in the colors of the Russian flag…

Express solidarity to the population of St. Petersburg. The inhabitants of Paris and Saint-Petersburg is United in confronting this barbaric act.

Yesterday in London, today in St. Petersburg. I Express my solidarity with the Russian people. Victory over terrorism should be our absolute priority.

Terrorism has struck in Russia, fighting with Islamist fanatics in the same way as we do. When we remove the sanctions against our ally?

I Express my full solidarity with the victims of this cowardly terrorist attack in St. Petersburg. Firmness and unity is the only answer to this barbarism.

Saint-Petersburg. I’m terrified of this terrorist attack in the subway. I Express my solidarity with the families of the victims. Italy together with the Russian people and government

I Express my deep condolences in connection with the terrible events in Saint Petersburg. Our heart beats with the hearts of our Russian brothers

I Express my solidarity with the Russian people after the terrible bloodshed in the subway of St. Petersburg. It is necessary to maintain unity in the fight against terror.

Deeply mourn and Express solidarity of Italy with the Russian people and government. We will continue to fight as a United front against terrorism.

Deeply saddened with the loss of life in the terrorist attack in St. Petersburg. Rome in solidarity with the Russian people.

The attack in Saint-Petersburg, 14 people killed, ISIS supporters (declared a terrorist organization and banned in Russia — approx. ed.) is celebrating. Bastards. I am sure that Putin in this regard is not limited to labels with crayons.

Putin must use Russia one solid fist, which is unknown to us in our Eurabia. Enough of hypocrisy, it requires kicks in the ass!

The worst part is the fact that almost nothing surprises anyone because the attacks have become almost routine. The ATTACK.

The mother of Assange appealed to the Prime Minister of Australia