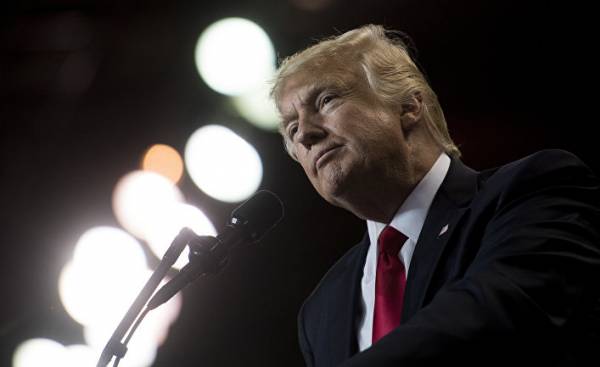 Financial Times: You are a master to make deals. If you can agree with XI Jinping, when he met him the Mar-a-Lago?

Donald trump: I really respect him. I have great respect for China. I would not be surprised if we do something very dramatic and useful for both countries. I hope so.

— Will you talk about North Korea and how to move forward on this issue?

— Yes, we will speak about North Korea. China has a huge influence on North Korea. And he will have to decide whether he wants to help us with that country or not. If you want, it is very good for China. If not, it will be bad for everyone.

— What are the incentives?

— I think that trade is a stimulus. It’s all about the trade.

— How you can quickly reduce the active trade balance of China?

— You will level duties?

— I don’t want to talk about the duties; maybe we’ll do it at the next meeting. Not yet. But you used the word “align”. This is a very good word, because while duty is not balanced. You know, if we talk about currency manipulation, if we talk about devaluation, they have no equal in the world. And our country did not know and did not know what to do. The previous administration did not know, and many admins do not know — I don’t want to say that only Obama. It lasted many years — they had no idea what to do. And I know.

— How ambitious your intentions toward China? Will we see a Grand bargain, in which is solved the North Korean problem, the American troops leave the Korean Peninsula, and there completely change the situation?

Well, if China is not going to solve the problem of North Korea, it we decide. That’s all I can tell you.

— And you think you can solve it without Chinese help?

— I will not say anything. Absolutely.

— You will start with North Korea, and then will talk about trade, or Vice versa?

— I will not tell you. I know I’m not the one President from the past that told where we will strike in the middle East. Which reported (I used these words in his speeches): “We will start the offensive in Mosul four months”. A month later, he again reported: “We attack Mosul in three months” and so on. Why did they say that? There is no reason for such talks.

— Mr President, you speak much sharper than their predecessors.

— Our predecessors did not. Look where we were. We have a trade deficit of $ 800 billion. The middle East mess. They did not have to send troops. I was completely against the war in the middle East, and I think I’ve been proven right. People struggled trying to show that I’m wrong, but you see that now the attitude is changing for the better.

— The world can not understand, what it is: a brilliant attempt to mitigate the situation, or talking about your desire to radically change the post-war liberal order.

Is not an attempt to mitigate. This is a very serious problem in our world today. And such problems is not one of them anymore. But this is not a game… it’s not nonsense. The United States chatted long enough and look what happened. A road to nowhere.

— When people look at the words they are scared. They think that the new President, unlike his predecessors, does not believe in the value of alliances.

You will be able to agree on tax reform this year, and what are its conditions?

I don’t want to talk about the date when it will be. We will have a very large and very strong tax reform. But when it is, I won’t tell you.

Right now I am working hard… You know we did not vote, but as for health care…

— Because you didn’t want to lose.

Yes. I don’t lose. I don’t like to lose. But the exact date has not been determined. They are in talks, we act. I don’t know if this is for you. They are negotiating right now. Voting for no reason. I said don’t vote, and we’ll see what happens. But anyway, I promised the people great health. We have in the country is really very good health care in one form or another. Obamacare will be repealed, and it will be replaced by something else. Now about the negotiations. If we do not support the “freedom Caucus,” it’s nothing. They are all my friends. Many of them are already gone, and many, as you know, already gave us their vote. But when votes from Democrats zero Republican votes should be about 100%.

You will be able in the future to enlist the support of at least part of the Democrats?

Well, the second attempt I will get democratic votes. I hate this second attempt, and I really don’t want a serious defeat “freedom Caucus” because our plan is a very good plan. When I say “our plan”, it is not only the first stage. There are first, second, third phase and they are all United in a wonderful plan. If we don’t get what we want, we’ll make a deal with the Democrats, and in my opinion, we will have a good form of health. We really do have a very good form of health. This is the form of health, which both parties agree.

— Really like. I get pleasure from it, I enjoy it. We have done much, we have accomplished much. Employment. Ford has just announced that it will open three large enterprises, will hold three major extensions. It’s thousands of jobs. General Motors, Fiat, and even some companies, they ask: “Why all this?” However, some of them were going to build something in Mexico, but now they are building in Michigan. Now they are building in Ohio. We started the process.

— During conversations with executives of companies in our country, half of them said, “Yes, it’s great, trust business returns”. And half said, “God, what will happen if he writes about us on Twitter, and our stock will fall?”

— You will not regret about some of his tweets?

— I regret nothing, because nothing can be done. You know, when you write hundreds of tweets, and sometimes you get the error, it is not so bad. Here take my last post, perhaps that is what you mean, about listening and surveillance. Turns out it’s all true. I also predicted Brakcet.

— How do you think other countries will follow the example of Britain out of the EU?

— I think this is a great solution for the UK, this will benefit the country, and I think it’s also very, very well for the EU. When it happened, I thought that there will be other, but in fact, I believe that the European Union gradually brings the order. It will be very good for both.

That is, this medicine, not the virus?

— This is very interesting. If you’d asked me the day after the election, I would say: “Yes, the EU will begin to disintegrate”. But they did a very good job and soon I meet them — managed to strengthen their Alliance. I had a wonderful meeting with Chancellor Merkel. Really great meeting, I really liked it. The same thing she said to me. I talked to her two days ago. She told me the same thing, we had a lovely meeting, but the press doesn’t get it.

So, the center in Europe preserved?

— What do you mean they got better?

— Just think, any other mood, there was the desire to stay together. I don’t think they had such sentiments and such a quest when they struggle with Britain, and Britain ultimately decided to leave. I think this is a great solution for the UK, and I think it’s also very, very well for the EU.

In France, marine Le Pen says something similar, but not the same. How do you think her victory will confirm the truth of your words and actions?

This is an edited transcript of the interview, edited for clarity.