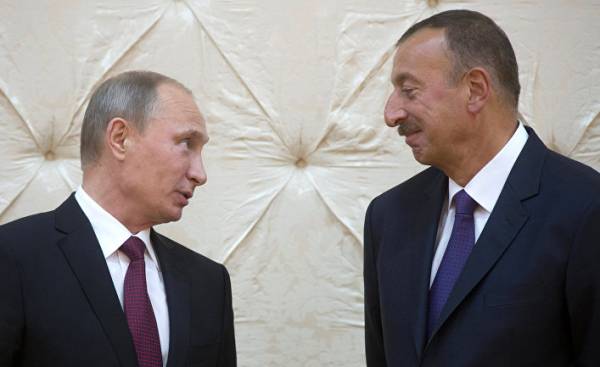 At the end of last week took place in Sochi meeting of the presidents of Russia and Azerbaijan, Putin and Aliyev. Vladimir Putin expressed hope that this meeting will contribute to finding solutions to existing regional problems. Putin in particular said: “I am Glad to talk with You about our bilateral relations, about how the situation in the region. It is not easy, but I hope that our meeting today will help to ensure that we will find solutions to all complex problems. Of course, we’ll talk about how to develop bilateral relations of Azerbaijan and the Russian Federation.” Putin also noted that Moscow and Baku have many joint plans for the future.

Aliyev, in turn, noted that relations between the two countries are developing “very successfully”. According to the President of Azerbaijan, such meetings are held periodically and “give a nice boost to the” development of bilateral relations. “We are pleased with the high level of our relations. Actively cooperate in political, trade-economic and humanitarian spheres. There are good prospects in the transport, energy sector. That is, our relations are multifaceted and cover practically all spheres of our life”, — Aliyev said. “There is a need for periodic consultations on important regional and global policy”, — said the President of Azerbaijan. Aliyev said that the Azerbaijani side is satisfied with the level of relations with the Russian Federation.

Lately in the Russian press there were publications that Moscow is stepping up its mediation efforts in the Karabakh process. The Russian newspaper “Izvestia”, in particular, wrote that the Kremlin is trying in the near future to arrange a meeting Sargsyan-Aliyev. According to the newspaper, Yerevan had given its consent, Baku also refused the Kremlin’s proposal for the organization of such meetings at the same time, putting the condition that the negotiations took place, “was defined by the specific agenda of the talks.” Putin and Aliyev at a meeting in Sochi discussed the issue of Karabakh conflict settlement gave the Agency APA, referring to the press service of the President of Azerbaijan. At the meeting, Putin and Aliyev “expressed confidence in further successful development of Russian-Azerbaijani ties of friendship and strategic partnership.”

It is important that this meeting took place against the background of continuing for several weeks, information about the tension in Russian-Azerbaijani relations. Moreover, Putin in Sochi on July 21st at the meeting with the children’s educational center “Sirius” approached planned for the same day a meeting with Azerbaijani President Ilham Aliyev, calling it a problem. Response to the humorous remark of a leading TV channel NTV Kolyvanov whether the delay in meeting with the children to create problems, as the President has prepared a gift only for those born on July 21, four members, Putin literally said, “I Have a problem it’ll be. In an hour I have a meeting with the President of Azerbaijan”. And earlier Putin also noted that the situation in the region is not simple, and expressed hope that the meeting with Aliyev will contribute to finding ways out of difficult problems.

Thus, the meeting Aliyev-Putin clearly passed with the discussion of problematic issues. And the fact that the Russian-Azerbaijani relations there are problems, wrote a few weeks ago. In particular, there were Russian-Azerbaijani diplomatic mutual accusations in connection with the discriminatory attitudes of citizens of the Russian Federation. Moscow has demanded from Baku to end discrimination against citizens of the Russian Federation to the Armenian surnames. “We have to say that arriving in Azerbaijan, the Russian people are discriminated against along ethnic lines”, said the Ministry of foreign Affairs of the Russian Federation, citing many examples. “We continue to demand the cessation of outrageous discriminatory practices are incompatible with the friendly relations between the two countries, said Russian depodesta. — Of course, we will draw conclusions from the current situation”.

Over the past two months this is the second case of disagreements in the Russian-Azerbaijani relations. At the end of may Azerbaijan condemned and called a political decision by the Supreme court of Russia on the dissolution of the public organization “all-Russian Azerbaijani Congress”. Azerbaijani foreign Ministry called the decision of the Russian authorities unfriendly step, having declared that thus Moscow has supported the Union of Armenians of Russia. “All this may have a negative impact on the intermediary role of Russia in the settlement process of the Karabakh conflict”,- said the speaker of the diplomatic corps of Azerbaijan Hikmet Hajiyev.

Thus, although the meeting Putin-Aliyev was designed to help find solutions to all complex problems, however, it is obvious that Russia is taking steps to exert pressure on Azerbaijan. The reason for this may not necessarily be in these problems referred to in recent months. It is possible that the expectations of Baku from Moscow and much glubinnoe concern of the economically and energy issues to the geopolitical position of Baku.