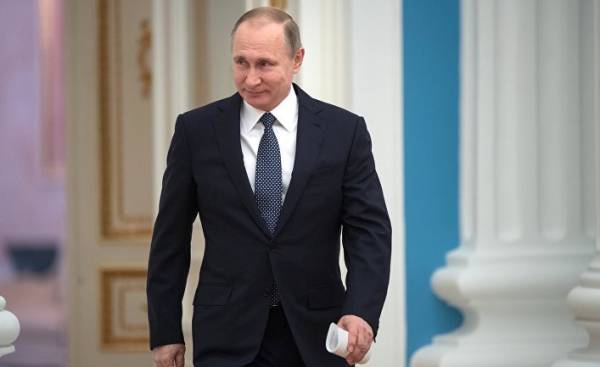 A year before the elections Vladimir Putin has still not confessed, if he was going to run for a fourth presidential term. The Russian leader that it is, the illusion of intrigue keeps to the last. At the same time, rumors spread that the Kremlin plans to achieve in 2018, a record support and a record turnout of over 70%. Political analysts doubt the ability of the presidential administration, even with the fraud to achieve a 70 percent turnout. While it is clear that the only possible winner — Vladimir Vladimirovich Putin.

A year later, on 11 March 2018 in Russia should pass elections of the President. In spite of actively spreading rumours about the replacement for Vladimir Putin from power, there is little doubt that the main candidate will be the acting President. The election result also is not of particular interest — even in Russia. It’s obvious that Putin means his victory. An intrigue in other: whether the power to achieve exemplary turnout and result.

By this time, his nomination has yet to announce the leader of LDPR Vladimir Zhirinovsky, Grigory Yavlinsky of the Yabloko party, Alexei Navalny, the politician and the businessman Sergey Polonsky. The rumors about the alternative to Vladimir Putin from the Kremlin, which played for several months. In 2000, Putin called the presidential elections a shameless deed, and his entire political career was accompanied by the creation of the illusion of the presidential nomination as a forced measure. Before his third term, the Russian leader reiterated that “never aspired” to the presidency. About Putin’s decision to run has never declared earlier than six months before the election. In 2010, as Prime Minister of Russia, Putin, claimed that he did not know whether he would run. A year later, at the Congress of “United Russia” to support the candidacy of Vladimir Putin, Dmitry Medvedev is split, what about the famous castling they agreed much earlier, “when we formed our comradely Union.”

Formal is not much more clarity now. Last week, several leading Russian media — both Pro-Kremlin and claim to be objective — said that Putin will run for a fourth term. And every publication referred to anonymous sources in the Kremlin. In each case cited the three main tasks of the Kremlin. First, elections should be more transparent and legitimate than the previous one. Second, the result should be better than in previous elections. Thirdly, the turnout should be higher than in 2012 — the result and the number of voters must be a record for Putin. It is argued that this campaign will be policy last.

This, in the morning, followed by the traditional official statement, the press Secretary of the President Dmitry Peskov called such predictions are premature: “While there is still sufficient time before the start of the electoral campaign, yet the agenda is different.”

In the Russian media know that this source was almost certainly the first Deputy head of the presidential administration Sergei Kiriyenko, who heads the Kremlin’s internal policy. For this he gathered journalists to a closed briefing, noting that his name must not be mentioned. This practice, incidentally, uses the Ukrainian presidential administration. Of course, the media just expect the broadcast of abstracts representatives of the Bank.

After the publication of these materials in the Russian media environment has led to heated debate: should or should not place themselves in such publications. Moreover, lately it is not the first story.

The turnout and the result

At the end of last year, Kirienko at a meeting with Vice governors on domestic policy, he learned the media, said that the so-called main candidate, that is Putin should win with extremely high turnout of 70% and with a score of 70%. So half of all voters must be for the current President. In 2012, Putin has received 63.6% of votes, and the turnout was more than 65%. At the second election of Putin in 2004 the figures were as follows: 71.3 per cent and 64.4 per cent turnout. In 2008, Dmitry Medvedev won with a score of at 70.3% and with a turnout of 69.8%. Next year the result should be at least not worse. Last year’s Duma elections, recall, was the record-low turnout of 47%.

Former Deputy Prime Minister Alfred Koch, as he wrote on his page on Facebook, expecting a boring and predictable campaign. Putin, according to Koch, will win with a score of 70% for the same turnout. And, of course, this result is draw.

The head of the analytical Department of the Center for political technologies, Tatyana Stanovaya in comments “Apostrophe” said the Kremlin in the past few months had to choose between “competitive” and “referendum” scenarios. In the first case, it would create the conditions of artificial rivalry. The admission of non-systemic candidate would be one way to increase turnout. The Kremlin, however, chose the second option, says Stanovaya. Therefore, there is a risk that elections with very low turnout, the legitimacy of Putin’s victory will be less than desirable to the Kremlin.

“In fact, we are talking about how to make the election a vote of confidence to Putin, explained the essence of the Stanovoe “referendum” strategy. — Judging by recent events, leaks and talking to the media, selected the second scenario. This means that the Kremlin is ready to do elections minimally competitive. Despite the fact that everyone knows who will win, and the intrigue is created through conversations about the last time Putin and by the salience of the issue on the agenda. While this is a mystery — what is “the agenda of the last term of Putin”.

Russian political scientist Dmitry Oreshkin also believes that the strategy for the next presidential elections, the Kremlin has already developed. And he had no doubt that the Deputy head of the AP Sergei Kiriyenko — the source of the rumors about the need for a record turnout and the result. However, Oreshkin believes in the reality of such aspirations of the presidential administration: “Technically, this task is impossible. Result will provide, I don’t doubt that, but 70% turnout just will not work — how many don’t draw, won’t pririsovyvat”.

From the point of view of technology, according to Oreshkin, the Kremlin is doing everything right, making us believe in the inevitability of Putin’s victory. In order to increase turnout, the authorities might use several tools. The main ones are drawn 99% of voters in regions with extremely friendly elites and falsification at the expense of voters at home.

… Cites the example of the result of Medvedev in 2008, when, according to him, due to ballot box stuffing falsified “at least 12 percentage points”. In the parliamentary elections in late 2011 in Moscow, “United Russia” took a further approximately 17%. Then there was the protests on Bolotnaya square. And so in March next year for Putin in the capital voted less than 50%. That is, the rigging was much less ambitious. But in Chechnya showed a turnout of more than 99%, and 99.8% supposedly voted for Putin.

“In addition to Chechnya, we have about a half dozen such “electoral sultanates”, where the results depend on the mood of the elites, and not from the mood of the voters. They will be the administrative resource to invest in favor of the Moscow candidate, which this time will be Putin. The problem is that everyone understands that these “sultanates” falsified results”, — explained the analyst. In addition, they all still add up to slightly more than 10% of the vote.

The second tool is the falsification due to voters at home. For example, in 2012 in Tambov region in their homes voted in the 20% of voters that “technically impossible” because one group of election Commission members should attend, if we take the average number, about 140 addresses on election day. Then voted for Putin in the region of 72%.

Another way to improve elections is to provide right to vote to people with passports, the so-called “DNR” and “LNR”, where it is possible to paint figures, as in “electoral sultanates”. And although, according to Oreshkin, the Kremlin this option certainly consider it risks on the international stage. “If you do, it will mean very bad things”, he added.

According to the Deadlift, work on improving the appearance will be comprehensive. First, will try to mobilize the population by speculation about the last time Putin, who is “given a chance to complete their global plans and thereby strengthen the selected vector of development of the country.” While technologically a large turnout can try to provide the permission to not vote at the place of registration, and at the next station, without special absentee ballots.

“The goal to ensure the victory of at least 50% from list structure of voters and make elections fair, functionally insoluble, — says Oreshkin. — If the elections are honest, then the result is unpredictable, and Putin might not even get 50% in the first round.” He recalled that the polls only show the opinions of those who agreed to answer. Then, as the number of outgoing response from sociologists is increasing.

The main tool in the upcoming elections will be of political and media propaganda. According to Dmitry Oreshkin, the Ukrainian question is still understandable vehicle for the mobilization of the electorate before the election. However, the effectiveness of this method does not look so high because people are tired of the constant propaganda about Ukraine.

“Any escalation of the situation in the Donbas is causing negative feelings to the “Kiev” Ukraine and, consequently, fraternal feelings in Eastern Ukraine. But one of the problems is that tired, people are tired. De facto already knew that Ukraine is a separate country. It is the result of this tedious propaganda,” he explained..

“Honestly, I don’t think that will be played on the Ukrainian map, says Stanovaya. — Can actively play on the theme of the return of the Crimea: it is, I think, will be used as one of the main historic achievements of Putin.”

The Ukrainian conflict she expects for the election campaign, as this affects the foreign policy agenda.

“I think the Kremlin is now very keen to negotiate with the United States regarding the settlement of the conflict. There are not very eager to raise once again the aggressive wave and provoke negative emotions. Another thing, if the collapse of all hope for trump, because they have not completely collapsed, the Kremlin can go into the dressing. But in any case, for the population of Ukraine is painful. I don’t see how it could mobilize the electorate around Putin”, — concluded the Deadlift.