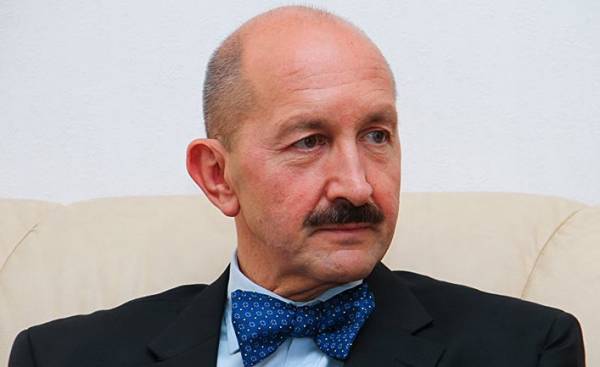 Russian authorities expect that the Spanish government “will assess” public criticism of President Vladimir Putin of Russia and its policy came from the mouth of the Ambassador of Spain in Ukraine Gerardo Bugallo Ottone (Gerardo Bugallo Ottone). In a statement on Wednesday the comments of the Russian foreign Ministry called “unacceptable” “several public statements” made by the Ambassador of Spain in Kiev at the meeting of the press club “Diplomats without ties” organized by the Agency “UKRINFORM” on March 22.

During a meeting of the club “Diplomats without ties”, Bughio said that when Ukraine will be finished corruption will prevail and the rule of law, it would mean a complete defeat of Vladimir Putin”, reports “UKRINFORM”. According to this Agency, the Spanish diplomat expressed the opinion that sanctions against Russia “should be strengthened” and that Putin is leading Russia “on the path of disintegration, as at the end of the Soviet Union”. In addition, according to the same source, the diplomat called “idiots” those Spaniards who fought for the self-proclaimed Donetsk and Luhansk people’s Republic.

“Making peremptory and biased statements, the representative of Spain in Kiev, not only went far beyond his official status, but opposed himself to the official position of the leadership of their own country, which had balanced positions with all bilateral contacts at a high level expresses the desire to reduce the confrontation between the EU and Russia to deepen political dialogue with Moscow, cooperation in resolving regional conflicts, to further develop trade and economic cooperation”, — said in the comments of the Department of information and press of MFA of Russia. The Russian foreign Ministry considers “particularly unacceptable” the negative rating given by the Ambassador of the Minsk agreements.

“We expect that Madrid will assess how the words of their diplomatic agent in Ukraine consistent with the goals and objectives of Spanish foreign policy, and take measures to prevent in the future similar kind of incorrect statements, unusual and highly experienced centuries of diplomacy of Spain.”

According to diplomatic sources in Madrid, Ambassador of Bugio said that his words had been incorrectly translated and taken out of context. The representative of the Spanish Ministry of foreign Affairs, gave comment to the edition, did not want to “multiply comments reviews” and contented himself reiterated the official position of the Ministry on the conflict in Ukraine, which can be summarized in three points: “Full support for the European Union and Spain’s sovereignty, independence, territorial integrity and inviolability of borders of Ukraine”, “bet on a political solution based on the Minsk agreements as the only format adopted by the parties to find a solution” and finally, “the call to all parties to the conflict to fulfil the obligations assumed in Minsk.” To communicate directly by telephone with the Ambassador of Bugio our publication failed.

According to the Agency “UKRINFORM”, the Spanish Ambassador also said that Russia is the only country that is comparable with Ukraine on the scale of corruption and human capital. But between them there are large differences, in particular, that “in Ukraine for ten years, there have been two revolutions, as in Russia, it seems, the population is quite the current state of things, and no revolution in sight, which seems extremely strange and alarming”. The Spanish Ambassador also mentioned the “terrible aggression against Ukraine from Russia”, according to “UKRINFORM”.