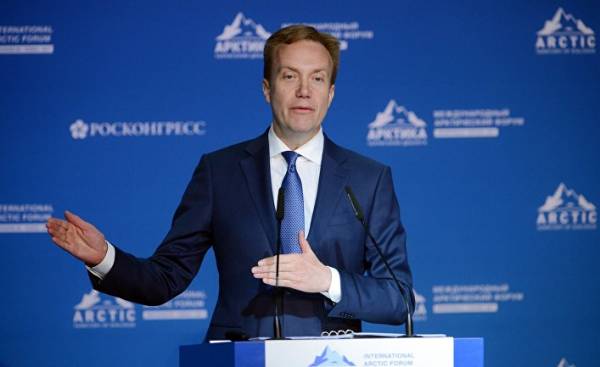 “Now, in any case, there are signs that people are beginning to understand that you need to settle down,” said foreign Minister Sergei Lavrov with a light smile on his lips.

Between Norwegian and Russian foreign Ministers, it was hardly the first words in three years and two months.

“I think the right time. I was invited,” said Brenda.

“In the future we would like to further intensify cooperation in the Arctic and the North in General. So let’s see what will be the reaction,” said Brand.

“He should have come much earlier, says the mayor of Sør-Varanger, rune Rafaelsen (Rune Rafaelsen). — If you have a Russian neighbor, you should conduct a dialogue with him constantly. You can’t just stop doing it”.

Parquet on the streets

Mud, dirt, asphalt holes, and among all this just herringbone flooring, because impassable slush stretches all the way to Arkhangelsk port.

When come President Vladimir Putin, a substantial part of the ruling elite of Russia, the presidents of Finland and Iceland, five foreign Ministers, including the Norwegian Borge Brende and Vice-Premier of China, facades should Shine.

When Putin takes another international forum “the Arctic — territory of dialogue” Russian — be on the ears.

“Even when he came Khrushchev, they came up with this great idea: to put on the road flooring,” says one pensioner in Arkhangelsk. Khrushchev was the Soviet Union the Secretary-General.

Brand thought for a long time.

“After what happened in Ukraine, after the annexation of Crimea was a difficult time,” said Brenda.

The Minister of foreign Affairs stressed in an interview with the Russians that sanctions against Russia — part of a broader international response.

“It was not a bilateral issue between Norway and Russia.”

Lavrov did not hide that considers a meeting as a sign that Western politicians “are beginning to come in.”

The topics of conversations in Arkhangelsk between the Brand and Lavrov were border issues, rescue in the Barents sea, fisheries, nuclear safety and the new agreement on notification about nuclear accidents.

“There were certain difficulties, but we have had a constructive dialogue,” said Lavrov Brand.

Arkhangelsk oblast is located in the North-West Russia, and extends 587 thousand square kilometers from Kirov to Karelia in the West to the northernmost territory of Russia — Franz-Joseph.

The city of Arkhangelsk, which is home to 348 thousand people, is the administrative center of the region.

The Vikings called the land of Bjarmaland (Bjarmaland), Norwegian and Russian princes fought for control until the 15th century.

Arkhangelsk is situated on both sides of the river Dvina in the White sea.

Before Peter the Great won territory from Baltic sea from the Swedes and founded Saint Petersburg in 1703, the city was the main port of Russia.

In the late nineteenth century between Moscow and Arkhangelsk railroad, the town began to play an important role in the export of Russian timber.

Until recently the port was closed five months of the year because of ice, but now operates year-round thanks to icebreakers.

The main industries of the region are connected with oil, wood, titanium, gold and basalt. Manufacture of paper and pulp is about half of industrial production in the region.

Here is the schedule of the travel Brand

Many officials and representatives of the Norwegian business would like to improve the dialogue between Norway and Russia when compared to what state he was after the Russian annexation of Crimea.

The review, which amounted to Aftenposten on the basis of the schedule of visits of the Brand, shows that the Minister of foreign Affairs, this was not planned.

After the Olympic games in Sochi in 2014, the Brand has made more than 170 trips around the world before meeting with foreign Minister Sergei Lavrov on Wednesday.

This suggests that he is, without a doubt, the most traveled over the world, the Minister of foreign Affairs of Norway for the history of the country, although a large neighbor of Norway and was not in the list of priority routes.

“Now is the time”

The Minister of foreign Affairs børge Brende rejects the criticisms, reduces to the fact that political constraints of the government towards Russia have failed.

“I think the right time. Now I was invited, — said Brand. — If a meeting is held, it must be the theme and agenda for discussion. Many foreign Ministers were waiting on a visit”.

Aftenposten: how do you want to strengthen cooperation with Russia?

Borge Brende: I think it’s important in some cases, not to jump the gun unnecessarily. We need to verbalize everything.

— You mean the statements of the Ambassador?

Yes. We have to solve some current issues, but it’s not a big concern.

In February and March, the Russian Ambassador in Oslo, Norway was subjected to harsh criticism, he condemned the Norwegian participation in the missile shield NATO and other meetings of NATO.

The nuclear threat in the North

One of those areas where the Brand would like to improve cooperation with Russia is further clearing of nuclear waste in Norway (as in the original article. That’s right: in Russia — approx. TRANS.).

Summer marks 20 years since the beginning of the solution to the issue of nuclear waste in Andreeva Bay.

Soon should be taken out first zacapawanyi fuel rods. But many challenges still lie ahead.

“The important issue is the continuation of cooperation in the field of nuclear safety and environmental protection,” said Brenda.

“It is also important to discuss cooperation in the economic Commission. We can continue to cooperate in areas which are not subject to the measures of restrictive character.”

The Minister of trade and economy Meland Monica (Monica Mæland) will travel in April to Moscow for a meeting of Norwegian-Russian economic Commission.

In the three years that passed after the Crimea, cooperation between Russia and Norway ended in a number of important areas.

Military cooperation in the form of frequent meetings and exchange of information is almost frozen, and earlier this area was mentioned as very important.

Russian counter-sanctions led to a sharp termination of the Norwegian fish export.

In addition, completely stopped new major projects in the field of economic cooperation.

At that time, as German, French, American, Italian, Chinese and Indian companies are opening the door to Moscow, for the few Norwegian companies to make it much more difficult.

“We have common interests”

“We have common interests regarding the protection and use of the North,” said Brenda. Russia also believes that in the North, people have to live. And it is necessary that they were due something to live for. The North and the Arctic cannot be converted into a national Park”.