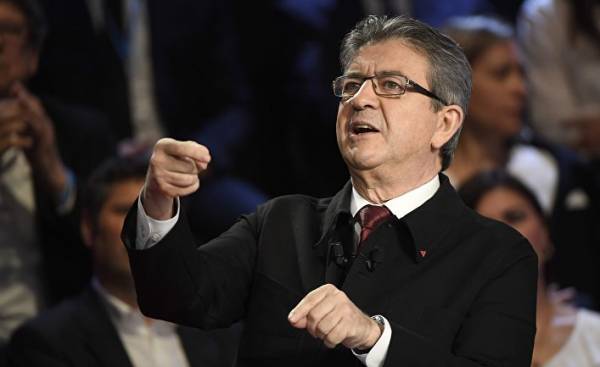 After Jean-Luc Mélenchon bypassed in the polls Benoit Amon, he resorts to all means and reiterated the alleged rapture of the candidate from “Rebellious France,” Vladimir Putin. That’s how things really are.

In the latest map. Impact argument in an attempt to stop the fall of a candidate whose schedule is eventually crossed paths with a rising curve of Jean-Luc Mélenchon. Recently the friends of Benoit Amon excitedly shouting in the media about the love of Jean-Luc Mélenchon to the Russian bear. Mélenchon is a fan of Putin. There is so much to cool the ardor pravozashitnikov electorate…

March 27, when the results of the next poll candidate of the socialists is 5% behind the opponent from the “Rebellious France”, Deputy of the socialist party, Pascal Shirky (Pascal Cherki) made this statement: “We do not agree to be Putin.” The day before Benoit Amon himself sounded the attack at BFMTV: “My difference from Jean-Luc Mélenchon is that I don’t think the alignment of France in the Kremlin’s policy”.

Thus, the socialist, puts it on a par with Francois Fillon and marine Le Pen, who do not hide Dating with Vladimir Putin. The head of NetFront even went to him for blessing in Moscow on March 25. With regard to the former Prime Minister, he says he worked with his then Russian counterpart. “We were pleased to see each other,” he acknowledges in the book “to Do.”

Anyway, at the rally in Le Havre March 30 Jean-Luc Mélenchon tried to directly reply to the accusations of “Putinism”: “I had nothing to do with Vladimir Putin. I am categorically against its policies, and if I were a Russian, I would vote not for the party and for my friend from the “Left front”, who is now in prison.” He emphasized and their differences with the President of Russia: environment, attitude to the opposition, anti-capitalism, the protection of human rights. “Although I don’t have anything to do with him, this does not prevent me to say that I’m not going to be part of the choir of raving, hoping for a conflict with Russia. I stand for peace,” he said.

But why this persistent notion that Mélenchon is a fan of Putin? Let’s deal.

The idea that Jean-Luc Mélenchon — Putinists was born in 2014 amid the political crisis in Ukraine. Then the Ukrainians were protesting under the banner of the movement “Euromayday”, which eventually led to the resignation of Pro-Russian President, Viktor Yanukovych, and Crimea voted in a disputed referendum to join Russia. Jean-Luc Mélenchon opposed any retaliatory economic measures by the international community against Russia: “the Crimean ports are vital to Russia’s security, and therefore it was quite clear that the Russians will not sit idly by. They take measures to protect against adventurist coup government, which, regrettably, are the influence of neo-Nazis.”

“We, the French, should not have anything to do with this history, we should not support a provocation to Russia, which does not mean sympathy for the Russian government,” continued he then went about the process of entry of Ukraine and Georgia into NATO. All this was far from a Declaration of love. Mélenchon simply refuses to accept the romantic perception of all of the demonstrators from the Maidan as messengers of democracy and turn a blind eye to the presence of neo-Nazi movements in the ranks of the protesters. In addition, he sets developed his subsequent political course of France should not participate in conflict where it has no immediate strategic interests.

20 Feb 2016 candidate “Rebellious France” was one of the guests in the program “don’t sleep” on France 2. This time they discussed Russia’s role in the Syrian war.

When asked about his support of “the Russian bombings” in Syria, Jean-Luc Mélenchon said first, recall that “in the development of events create their own logic,” and stressed that the original mistake of the American intervention in Iraq, which “destabilized the whole region.” He further expressed disagreement to consider themselves “world’s policeman”, which generates “disturbance with double standards”. Here Lea salame (Léa Salamé) interrupted him, followed by this dialogue:

— You support what Putin is doing now in Syria?

And what does he do?

— I think it solves the problem.

Subsequently, the media wrote only about what Mélenchon gives carte Blanche to Moscow. But further discussion lets look at everything differently. Mélenchon explained his position: “I support the elimination of ISIS and the victory of the Kurds for stability in the region”. In response to another statement that Russian air strikes are aimed only at one opposition, he could not resist: “not True, it was the Russians cut off the channels of smuggling oil to ISIS (a terrorist organization banned in Russia — approx.ed.) through Turkey. They were the target of attacks. So I congratulate Russia with the successful destruction of these channels, which will help to strangle IG”. These tasks were confirmed as published in Le Monde (“Russia strikes oil reserves,” the end of November 2015) and the current state of IG in Syria. Then Mélenchon gave an answer about the concept of “insurgents” who indiscriminately call all active against the Syrian regime of movement, in spite of the penetration of their ranks Islamist militants: “When you see that al Qaeda (a terrorist organization banned in Russia — approx.ed.) is our enemy in Afghanistan, but becomes an ally in Syria, it is a real absurd. Need to restore order, and order implies the elimination of ISIS”.

A little earlier he said this: “we Have no friends we only have interests”. In other words, Mélenchon advocated a gradation of enemies and puts on the first place among them is ISIS, which inflicted a heavy blow to France. This explains three things:

— support to the Syrian Kurds, who in 2014 have distinguished themselves in the fight against “Islamic state”;

— support to the Russian bombings, if they destroy the sources of income of the IG;

— doubts about the strategy of America and France and support the jihadist and Salafist groups like “Jabhat EN-Nusra”, which was renamed “Fatah al-sham” (terroristicheskaya organization banned in Russia — approx.ed.) and has long maintained relations with “al-Qaeda”.

18 Oct 2016 Jean-Jacques Burdeno (Jean-Jacques Bourdin) it was hard to hide the glee when he turned to the guest with the following question: “war crimes in Russia — is “chatter”? That is what you said?” After participating in the “Test of truth” on Public Sénat, on 11 October, the MEP became the target of the attack-AFP with this headline: “war crimes in Syria? All this “chatter” — said Mélenchon”. Of the material suggests that on the issue of “war crimes of Russia” in connection with the bombing in Syria Mélenchon replied: “All this chatter”.

He subsequently flatly denied that interpretation of his answer. So what happened in live Public Sénat? Actually he was asked about the crisis in relations between Moscow and Paris after Francois Hollande decided to raise the tone against his Russian counterpart on the Syrian issue. “I do not agree with what he is doing, is completely contrary to the interests of France, said Jean-Luc Mélenchon. We are fully align with the interests of the United States, which does not correspond to the interests of France.” When the discussion concerned threats Francois Hollande to bring in the International criminal court case on the war crimes of Russia in Aleppo, Mélenchon replied: “All this chatter. There is a war…”

The problem is that a journalist used the expression “war crimes”, and that all observers began to consider the answer as doubts about the very concept. However, it was enough to listen a little further to understand the essence of thought. Just a few minutes Jean-Luc Mélenchon said: “Saudi bombing in Yemen monstrous, any bombing of the monstrous (…). However, there is a war, and both sides want to win. Let’s see what questions you will ask the guests a few days when we start bombing Mosul. You will surely find them divine and liberation. You know that there are French people that they were in the artillery? That all then?”

In conclusion, he reiterated his position: “War is war. It is terrible. That is why we need a national coalition that would unite all parties to the conflict to end with the movements of political Islamism”.