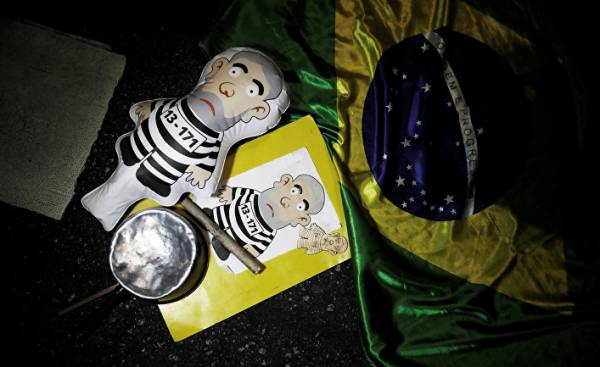 Former U.S. President, Barack Obama called Lula da Silva (Luiz Inácio Lula Da Silva) “the most popular politician on Earth”. In 2009, he became the owner of the title “man of the year” by French newspaper Le Monde and the Spanish El País. And Time magazine named him “Man of the decade”. When Luiz inácio Lula da Silva left the presidency of Brazil in January 2011, he was popular as a rock star.

Time magazine was just in love with Lula da Silva. This was an exceptional man: the son of a Union member who once was behind bars, leading the protest March. He was born in a simple family in the town of Caetes where people have always lived the poor. “It was a true son of the Brazilian working class,” wrote the American filmmaker Michael Moore (Michael Moore) in an article for annual publication that publishes materials about personalities, “changing the world”.

Lula was a symbol of the socialist dreams of the XXI century, dreams of universal equality. And now the court of first instance sentenced him to nine years and six months in prison on charges of passive corruption and money laundering. This sentence was handed down by a Federal court judge Sergio Mora (Sergio Moro), who heads the investigation of corruption in Brazil. The defendants in this case are about 61% of the members of the National Congress of the last convocation, ousted the country’s President Dilma Rousseff (Dilma Rouseff) and acting President Michel Temer (Michel Temer), which may suffer a similar fate. Hold out if he was at his post or not depends on Congress.

But while Brazil and all of South America was worried about the fate of Temer, suddenly Lula da Silva has again attracted everyone’s attention, but not such to which he was accustomed. Media almost ceased to take into account the charges against him. The world wondered whether Lula will win the elections in 2018 or not. According to the results of public opinion polls, he had the highest popularity rating, despite the investigation carried out against him. It seemed that Lula should win in all four criminal cases opened against him. And suddenly the judge Mora makes it a sentence, and Lula gets one stage with their colleagues.

But the case of Lula’s special. It’s not Dilma Rousseff, which the ex-President of Brazil was chosen as his successor, although his support did not save her from impeachment and from lower trust rating to 8% by the time of the ouster. Lula is not Michel Temer, who is currently acting President with the lowest popularity rating in the history of the country — 7%.

When Lula left the presidency, he had the highest approval rating in the history of Brazil is 87%.

Although Lula was the founder of the workers ‘ Party (PT), he made a bet on the economic development model of his predecessor Fernando Henrique Cardoso (Fernando Henrique Cardoso). Because of this, the annual growth of the Brazilian economy was about 41% and the unemployment rate fell from 10.5% in 2002 to 5.7% by the end of the presidential career of Lula da Silva (2011).

Due to such indicators Lulu was invited to endless forums and conferences throughout the world and had given him a special homage. Most impressive was his fight and victory over poverty, which secured him a worldwide reputation comparable to the Rolling Stones (for description of the local media).

One of the outstanding projects completed during the presidency of Lula da Silva, was the “Family purse” (Bolsas de Familia) — programme of assistance to poor families with income of less than $ 80 per month. This measure helped to get out of poverty 29 million people. This he lectured all over the world.

But the money received for these lectures, have now become one of the objects of investigation, which today does not stop at nothing. The Prosecutor’s office has determined that funds in the amount equivalent to approximately 8 million dollars were obtained based ex-President of Brazil a non-profit organization Instituto Lula and another company created in 2011. Theoretically, this money was the result of the payment of the fee.

But investigators are trying to figure out if these kind of lectures or the accounts of the organization were the result of bribes a corrupt government of Brazil.

His government were implicated in a corruption scandal surrounding the oil company Petrobrás, where it all began. The sale of shares of Petrobrás managed to attract $ 70 billion, allowing for a series of fraud in the company during the presidency of Lula.

Lula da Silva was also charged that he received from the construction conglomerate OAS multi-storey Villa in the resort of Guaruja on the coast of são Paulo as a bribe for the assistance in conclusion of contracts with Petrobrás, as well as the fact that the company pays for the property maintenance of the former President.

After learning the verdict, Lula has rejected the allegations. He believes that they intended to prevent him to announce his candidacy for the upcoming presidential elections. For the sentence in force in the relevant decision of the court of second instance.

While it is protected. He knows that he enjoys popular support. She needed him to after his name was tainted by corruption scandals, he could repeat what has already been said once: “My social activities are well known. In Brazil, I concede on popularity only to Jesus Christ.”