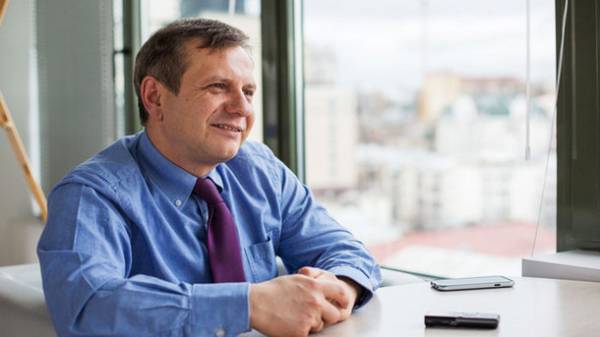 Litigation between Ukraine and Russia on the so-called “debt of Yanukovych”, which is conducted in London may not be the final loss of the Ukrainian side. This opinion was expressed by Executive Director of the International Bleyzer Foundation, an economic expert Oleg Ustenko.

In this case, Kiev will pay Moscow three billion dollars, together with interest, said the expert.

“There are a lot of puzzles. On the one hand, the decision of the London court. Second – the fact that said elder brother, former Prime Minister Tony Blair, who acts as a judge on this issue. He said that all the political arguments presented by the Ukraine (the annexation of Crimea and Russian support of separatist movements in the East of the country), was not taken into account by the judge. … And for all of Ukraine could end London’s decision that the money will have to pay,” – said Ustenko.

At the same time the specialist sees both pros and cons of the possible need to restore Russia’s debt.

“This lost battle does not mean defeat in the war,” – emphasizes the expert.

“Now it is possible with high probability to say that it lost $ 3 billion going to pay. Good or bad? I see the pros and cons in connection with this decision,” – said Ustenko.

The main disadvantage he names the lack of Ukraine’s “free” money.

“The Russian Federation, recognizing that the decision in London, declare that it recognizes the decisions of international courts. You cannot selectively choose – if he is here, accept and continue,” – says Ustenko.

Another minus Ustenko connects with the program of the International monetary Fund (IMF).

“What do we do with our program of cooperation with the IMF? It’s financial structure, calculated at $ 40 billion, of which 17,5 is the money coming from the IMF, the money – which sort of got due to the fact that a period of time we do not pay the loan in restructured European bonds. This design meant that 3 billion Russians are non-refundable. And even if we wanted to do it, we can’t, if you want to keep cooperation with the IMF,” – said the expert.

“But I see a plus. Suggest to look at world practice. London court of light in their decisions. But try to charge us this money and try to force us to act on those decisions. Ukraine’s position should be: we don’t refuse to pay for this bond, but not now – after some period of time. Russia will try to force us to pay the 3 billion immediately, because it will hurt our economy, I’m not sure we’ll get through this”, – said the expert.

In his opinion, for Ukraine to win will be to as much as possible to delay the payment. As you know, the court has already suspended the recovery of debt pending the consideration of the appeal.

“The second win is that the case was heard in polite court. There are still reaching the courts in the Hague and Stockholm. It is unknown what the courts will still be in the future. Russia, recognizing that the decision in London, declare that it recognizes the decisions of international courts. You cannot selectively choose – if he is here, accept and continue”, – said Ustenko.

At the same time, the economist believes that Russia is the most important publicity of the process than the return to Ukraine of money. Also, the expert stressed the political context of the case.

“In 2016, the year Russia received the right to apply for the two possible instances: London arbitration and the High court of London. This kind of disputes it is advisable to decide in the London arbitration. It gives the plaintiff the opportunity to obtain several significant advantages: the speed of the process, nonpublic and ease of debiting money from the borrower. But the Russian Federation shall submit the documents at London’s high court. From what we can make several conclusions: first, need more publicity, and secondly, not so worried about the chance of getting money, as tying your lender to himself in the third what she wants, most likely, to solve some global issues of non-economic nature”, – said Ustenko.

A positive signal, according to experts, is today’s IMF statement about the fact that they will consider the issue of Ukraine, on 3 April.

“Why this should be done as soon as possible? Because as soon as a decision will be made in London of the court, may hang the issue with the IMF,” – said the expert.

As reported, London’s High court on Wednesday endorsed an expedited consideration of the claim of Russia to the Ukraine on Eurobonds for $ 3 billion. The judge rejected all the arguments of the Ukrainian side. The decision was made according to the results of the hearing, which was held from 17 to 19 January 2017. Kiev intends to challenge the decision of the High court of London. The court gave permission to appeal.