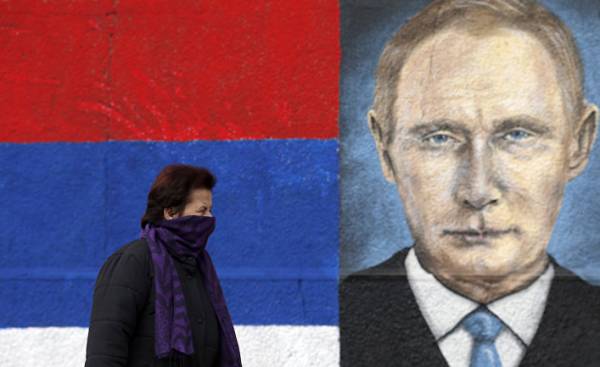 In recent days much has been said about the publication, exposing the Russian agents of influence in the Polish media, organisations and political circles. “Hungarian security services released a list of the Polish portals in the Kremlin! Read it!” — cried the headlines.

Very quickly it became clear that the authors of the sensational reports used sources the level of “Armenian radio”. The author of the “report of the Hungarian secret services” was actually the analytical center of the Political Capital Institute — the organization that is sponsoring, in particular, George Soros. It is well-known in our country speculator and the singer’s so-called open society, which generously sponsors the mass move to Europe young men mostly of Arab origin. The Political Capital Institute enjoys the support of different organizations, mostly left and liberal orientation, which include funds from Israel, Germany and the USA.

Bubble scandal quickly grew, until with a crackling burst. “The authors of the report acknowledged that the material on the topic of Poland they used these four anonymous sources. It was an expert on ultra-right movements from journalistic circles, the former security officer, an activist of the LGBT community and researcher,” wrote the portal Kresy.pl that was in the list of Kremlin-connected media. It is not surprising that these elected experts, as the above four, called work in Moscow even the protection of the family and life of unborn children. The document lists the organization, media and specific people who supposedly promote Russian interests, sounds a lot of names and surnames. Everything is logical and clear: if someone does not support Western liberal democracy, it is obvious that he is a Russian agent, of course.

Who is not with us, the Kremlin spy

The enemy, however, is not always called directly. Thanks to years of hard labour “independent” media, when a reader sees that someone, for example, dared to have his own opinion, his brain lights up light “Russia — Putin” or “foreign spy”. These tones sound on some websites and in some Newspapers and magazines that can not tolerate the slightest criticism of the party “law and Justice” (PiS). Despite the differences (they share business interests, personal conflicts and differences) of these media have one thing in common. The most influential of them have in common is that their financial success is largely dependent on the mercy and disfavor of the ruling party.

Such a tone is clearly present in the comments of the chief editor of the newspaper Gazeta Polska Codziennie on the subject of Black Wednesday and Black Thursday on October 6-7 2016 (when the Polish authorities refused to tougher laws against abortion — approx. TRANS.). Sakevich, Tomasz (Tomasz Sakiewicz) reveals the “true” intentions of the authors of the project “Stop abortion”: “the Maneuver was very simple: the public project has made such radical points which could not support even the Catholic Church. She never called, as is done in the public project and punish women. The document has caused a storm of outrage in the leftist circles in the whole of the opposition, but scared some people who were working to protect unborn children. The situation analysis allowed the leadership of the party “law and Justice” to come to the conclusion that the purpose of the law was not the protection of life.”

In the text there is one absolutely true phrase: “you Need to make in Poland protection received every life”. Otherwise, a short comment is filled with so many lies that its refutation would take several paragraphs. In this context, important basic idea. The leitmotif of “Russian agents” doesn’t sound right here, however, article of Sakevich fits perfectly into the approach which it is believed that the project was intended to overthrow the only worthy infallible government, against which there may be only the enemies of Poland and Champions of the interests of others.

Not all, however, have a so high opinion of the intellectual abilities of its readers, to leave them the space for reflection. One blogger who publishes texts on pravoohranitelnoi portal Niepoprawni.pl refused semitones. He decided bluntly to list the surnames and expose, and thereby to neutralize the threat of the leaders of the Kremlin foothold in the ancient capital of our country. What may have doubts after these words: “Polish pseudochristian, hyenas Putin’s website pch24.ru” “Russian bastards”, “dogs”, “Horde Putin from Krakow”? Revelatory article appeared six months ago, but neither the author (arising on the summons) or by the management portal did not dare to remove it. What was the reason for such an emotional comment?

The website PCh24.pl reprinted a message stating that the cemetery in Przemysl removed the monument to the victims of banderizm. We wrote that the monument was dismantled, apparently under pressure from the Union of Ukrainians in Poland, the head of which stood one of the leaders of the veteran organizations of the UPA (banned in Russia organization — approx. TRANS.). Rage dream to become famous in the court of the blogger called (as he believes deliberate) concealment of the fact that used in the project of the monument photo was actually depicted are not victims of terrible crimes against the poles, as completely different people (the author of the monument is denied such information). You may think that it may be invoked as a justification of the passivity of the Polish authorities in relation to singers banderizma or to change the moral and historical assessment of Volyn massacre.

Hit Putin on the Church Orthodox

Putin has become a very useful tool not only to fight the enemies of the extreme Pro-Ukrainian movements or of the party “law and Justice”. Italian journalists Giacomo Galeazzi (Galeazzi Giacomo) and Andrea Tornielli (Andrea Tornielli) at the end of last year published on the website Vatican Insider article entitled “Those Catholics who oppose Francis, I love Putin.” The authors of the text refer to the sociologist Massimo Introvigne (Massimo Introvigne), which sees in the criticism of some decisions, statements and publications of the current Pope’s idealization of the Russian President. “These circles consider him a good leader, they oppose the bad — Dad criticizing in the first place position against homosexuals, Muslims and immigrants. Close cooperation with the opposition Francis community are Russian funds, loyal to Putin”, — summed up vaticanisti.

People who stand on guard of the Orthodox teachings of the Church about family and marriage, radical opponents of the LGBT revolution and defenders of life is the followers of the main man in the Kremlin? This turn could be the first sign proclaimed in Fatima appeal Russia to God (which happens only under certain conditions). While we do not see.