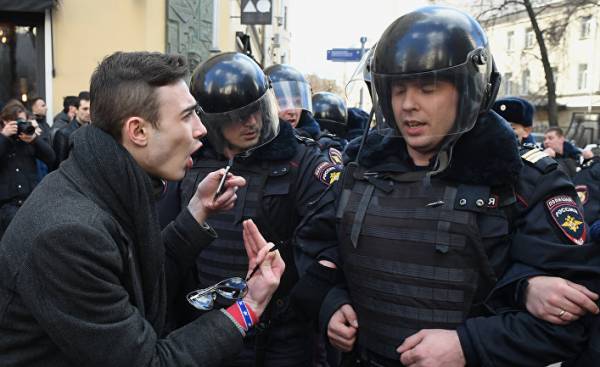 As it was. For all advisers, and condemning professing skepticism.

1) the Population in Moscow 12-14 million people. No one hundred thousand today in Moscow was not. There were many people, but significantly less than 100 thousand. Again, in dvenadtsatikolonnom the city.

3) the men had no means of protection. The people were not armed at all. Or clubs, or sticks or stones (there are from the bottom, if that — a few well-placed tiles), no cocktails — people all came without the means of defence/attack.

4) the Number of security forces was enormous. There were thousands and thousands. At some point in Pushkin square, their number is almost equal to the number of people who came. Power and moral superiority on their side. Despite the resistance of some individuals.

5) No Federal media did not report these events. Silence everywhere. The chance that someone will see the arrest, the violence and come to help, was equal to zero.

6) Many have been waiting for the Bulk and didn’t know what to do without a leader (=leader). I think many came just to look at Alexis. Independence eyes were not at all today.

Recall that until a few tens of thousands of people were on the streets — millions sat at home, going about their business. Millions. Ten million.

So something happened to make the streets at least half a million people. The critical mass when the people feel their power to the army and police. You need to know about this entire city. And most importantly — need a request from the people for change, need angry, irritated people, so more can not live. This did not happen, and never will be.

Detained today, according to my speculative calculations, in Moscow about a thousand people. Women, the elderly — took all. Anyone who could get the crowd (stood on the dais, put up the placard, and began to chant) was immediately detained. Some were beaten with batons. The so-called organizers in a hurry to get criminal case. This is all very sad, and no illusions I do not feed. The government is afraid of — it was visible today. But in fact, they had nothing to fear.

Thanks to everyone who came. This country is over. Today I was convinced once again. The FIGHT was virtually no one. Despite the commonality of motives and more or less simultaneous coming — today was the cry of a handful of lonely people in the midst of the indifferent hordes of zombies. Cry this with batons nailed into the asphalt. And the city, as if nothing had happened, continued his blind, inert existence on. I am very sad.