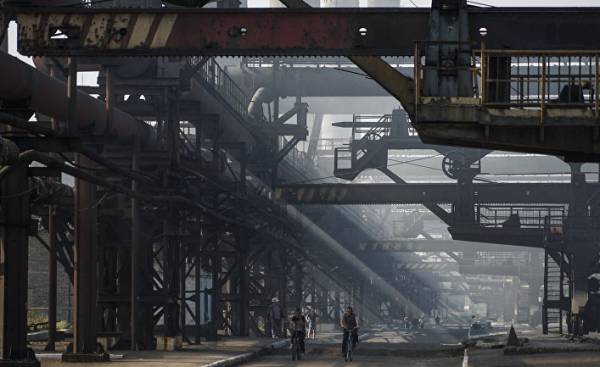 Right at the front line in Eastern Ukraine is the largest coke plant in Europe. He’s coughing up carbon dioxide all day, but for the residents of the Town is a symbol of normality. While in furnaces burning coal, there is hope. Despite the fact that factory workers dying on their jobs. Journalists HBL visited the coke plant in Avdiivka.

From the tall, thin pipes in an almost colourless sky, belching thick yellow-grey smoke. When the smoke wafts in here, it becomes difficult to breathe. Airways are collapsing.

Coal dust clogs the ears, mouth, nose and covers the hair. It crunches on the teeth, she scratched his ears.

We are standing on the roof above the giant pit furnaces, which burn coal at temperatures exceeding a thousand degrees. You need to carefully watch where you step, because if you step on one of the red-hot iron hatches, the soles of shoes can melt. Suddenly I feel like my back effusions wave of warm air. A huge trough is ready coke creeps along the platform. Cox glows, it’s still burning, and high flames vzmetayutsya.

For towers factory on the other side of the field is a residential neighborhood of apartment buildings, which is called Kyiv. It refers to Donetsk, the largest industrial town of Ukraine, in 2014, controlled by the separatists, supported by Russia. That snow-covered field actually represents the front line, not visible from here. Only the muffled sounds of gunfire that could be heard here and there, indicate that we are very close to the front, in the middle of the war.

The coke plant in Avdiivka is one of the largest in Europe — was in the midst of war by chance. The front went right next to the plant from the Donetsk airport just a few miles away, which wanted to control both sides. In early 2015, the separatists managed to seize control of the airport, simply bombing it. The coking plant remained under the control of Ukraine, and the city of Avdeevka, whose 22 thousand inhabitants completely depend on it because they need the Central heating.

The factory is huge. It is several square kilometers, and the snow along the road that crosses the territory, gray from coal dust. Destructive impact on nature is obvious and the overall negative impact of the coal and coke industry on the health of the residents of Donbass.

But for the residents of Avdiivka coke plant is a symbol of normality. Until it was shut down, there is still hope. My questions about how coal dust affects the lungs and respiratory system and cause of universal laughter. They live in the city, which would not exist without coal and which now survives in the midst of war it is thanks to him — coal. Or rather coke, that is, the product which is obtained by heating coal in an oxygen-free environment. What happens in the remainder, is an important fuel for the steel industry, another major source of jobs in the East of Ukraine.

Coke plant in Avdeevka supplies its products to two steel manufacturers in Mariupol. If the steel mills won’t get your coke, they will have to close. Heavy industry of the Donbass intertwined, especially coal and steel go hand in hand.

Those who still live in the town, there are only two alternatives: to continue to work in the factory or to leave. Who thinks of little more than a day ahead.

“Dust useful! It clears the throat,” says the head of Vladimir Borzenko when I ask him how work feel after decades of work in the factory.

He has the same attitude to the war, which I have often noticed in people living near the front — a mixture of stubbornness and fatalism.

“Several times I saw the shells flew over the heads. But the workers just continued to ship the coal,” says Borisenko proudly.

Before the war, the residents of the Donbass considered themselves to be workhorses of the country, those who move the economy of their heavy, dirty and often dangerous work. Now they feel the same pride before those who are fighting. Let them fight. And we are working. 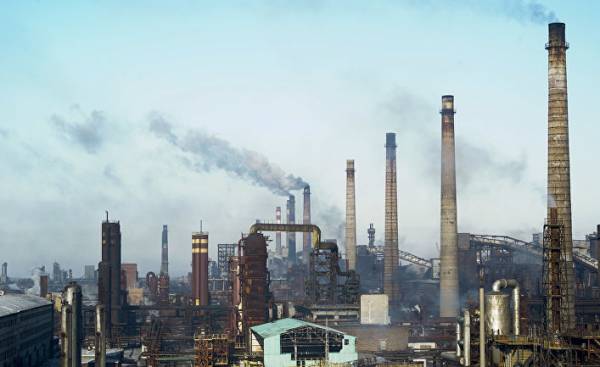 Sometimes to the death. At the plant recently with a monument stone engraved with gold text. He raised in honor of the memory of the work of Sergei, Kruglenko, who was killed during a rocket attack on the plant in February 2015.

A large part of 2014 and early 2015 in the area of fierce fighting. Shells fell in plant hundreds of times.

“We are fired 320 times. The most part we already fixed,” says Julia Minenko.

She is the press Secretary and in the office it supplies us with hats and protective clothing.

Before entering, we passed by a sign that says “bomb Shelter” and an arrow pointing to the basement stairs. The war is everywhere. But four thousand factory workers come every day to work, and not just loyalty. An average worker earns about five thousand hryvnia, which corresponds to 170 euros per month. It’s a bit, but it’s a reliable income in the region, whose economy lies in ruins.

On the roof above the furnaces we meet welder Vadim of booms who worked at the coke plant for 30 years. He does not think to leave.

“I work every day throughout the war. When they shot most of all, we stayed two months. This plant means to the Town all without it we are not a city,” perekryvaet rumble Vadim Booms.

The whites of his eyes gleaming. Face completely black from coal dust. Journalists HBL too soon going to.

All the workers with whom we speak, is equally proud of his plant is his contribution to its work.

“I’m not one day of work missed. Never in 26 years”, — says Igor Baryshnikov, with whom we met in the room near the ovens. Baryshnikov Deputy head and monitors, including for the schedule of firing.

“In recent years wasn’t easy, we are located at the front line. Clearly, people are nervous, when at any moment you will get a rocket. Sometimes we were forced to stop production, but then always managed to resume work”, — says Igor Baryshnikov.

His wife and children during the war he moved to Nicopolis in the South of Ukraine. Most families in Avdeevka separated men don’t want to quit work and remain, while women and children go. Children’s home and school functioning as before the war. They sometimes close with a particularly strong attacks.

When the plant is not working, the city Avdeevka there is no Central heating. This power outage is also not uncommon. Most electric cables are destroyed, and this means that the plant is not getting enough electricity to support production at the desired level. It has fallen from ten to five thousand tons of coke per day.

The problem is not only in a shortened supply, but in the difficult access to the coal. Most of the coal that buys coke plant, extracted on territory under control to separatists. Since the war began, the railway closed and coal production was partially stopped. This means that, ironically, the item needs to import coal, for example, from the United States and Indonesia.

“We have over the years had not received payment from city for Central heating, which we provide. They have unpaid bills for seven million hryvnias”, — says the head of Vladimir Borzenko.

The plant belongs to the company Metinvest, which in turn is owned by Rinat Akhmetov. The oligarch from Donetsk, who made a fortune on the purchase of heavy industry, is in no hurry to take a particular side in the conflict. While the charitable Foundation distributes in the region of food and basic necessities. In Avdiivka coke plant, in practice, operates as a humanitarian organization, especially when the attacks are particularly intense.

“When was the most fierce fighting, we just repaired the house in Avdiivka. We help all of our employees, if their homes are damaged, and, unlike the Ukrainian state, we do it without any bureaucracy”, says Musa Magomedov.

He is the Executive Director, he receives us in his office, dressed in factory form. Under the current situation, the role Magomedov is much more important than just the Director of the factory. All Avdeevka expects that, if necessary, the coke plant will help in any case. Magomedov I agree with that.

“Now our main priority is the city, not the plant. When there is no electricity and the city and the plant gets city. Then we have to put out our stoves. It’s a big job, because we can’t extinguish the fire completely — if the kiln has cooled, they are not going to use. Instead, we preserve them, and this is very serious work that sometimes you have to perform in a very short time.”

Right now, the factory incurs losses. Magomedov doesn’t want to say what, but merely States that the times are tough.

“But I’ve had much worse. We are not planning to close. If we turn to the work of coke oven plant, steel mills in Mariupol will be without coke, then they too will go bankrupt. It will affect the entire region.”

According to Magomedov, the owner of the plant Rinat Akhmetov said that the plant will not be closed until the workers themselves want to come to work.

“He untied our hands: we can decide whether they want to work in such conditions. I gathered the workers, when the military actions were most active, and asked whether it is time to quit. They unanimously replied that refuse to leave the plant, and at this point. So we don’t give up.”

Musa Magomedov speaks not about who is right and who is wrong in the war. The only thing he says — it’s time to find a political solution.

“We have politicians who claim that Ukraine is ready to fight 30 years to return the Donbass back. That’s nonsense. This war can be finished, it began to politics, and politics must stop”.

Coke produced in the so-called pyrolysis: coal is heated under oxygen deficiency. It is an important fuel in the steel industry, and is also used as a reducing agent for the production of iron. Ukraine is one of the most significant producers of coal in Europe. In the EU coke is produced primarily in Poland and the Czech Republic.

The war in Ukraine

A war between the Ukrainian army and the separatists supported by Russia, erupted in Eastern Ukraine in the spring of 2014. In February 2015, were adopted by the Minsk-2 agreement. According to them, come into force a cease-fire, all weapons caliber greater than 100 mm should be withdrawn, in separatist-controlled Donetsk and Luhansk people’s republics held a legitimate election and begin negotiations on the Autonomous status of these areas. Despite another truce in the middle of this February, in a front region shooting still happens almost every day.

Most of the industry in the war-torn region went bankrupt. The most profitable enterprises continue to operate despite the war, and remain registered in Ukraine, even though separatist territories.

Recently, the separatist authorities of so-called Donetsk and Luhansk people’s republics announced that the company must undergo a process of re-registration, although the people’s Republic not recognized as a state. 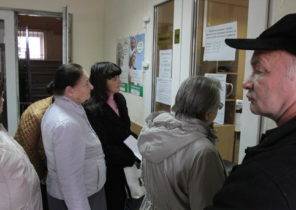 How to change the subsidies in 2017