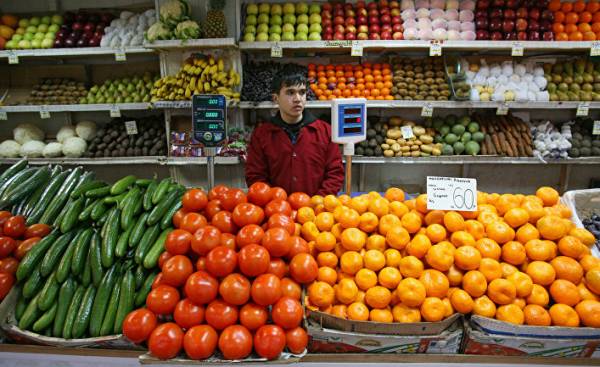 Tensions around of import-export relations of Russia and Turkey continues. After Turkey suspended the acquisition of six food products from Russia worth about $ 1.3 billion, the first reaction came from the Kremlin.

The tension in relations between Russia and Turkey with the destruction of the Russian plane, finds a solution in diplomacy, but remains in the economy. In this process, which began last year, the flow of Russian tourists to Turkey have stopped, some Russian companies operating in Turkey, stopped their investment or moved them to other countries, was again introduced visas. In the last few months have seen an easing.

The resumption of political dialogue between Moscow and Ankara was a signal that an embargo on the export and import of food products will be removed. During the visit many of the Turkish delegation led by President Recep Tayyip Erdogan to Moscow this expectation has come to the forefront. Russia lifted sanctions against some food products. Among the goods on which the ban was lifted, — onions, shallots, cauliflower, broccoli, salt, carnation flowers and chewing gum. The total value of these products was less than $ 20 million. The attention of the Turkish farmers was focused on fresh vegetables and fruits, which we sell to hundreds of millions of dollars. But the expectation did not materialize, and this move of Moscow Turkey responded by suspending imports of six food products worth about $ 1.3 billion: corn, wheat, crude sunflower oil, sunflower meal, peas and rice. Moscow reacted to this decision of Ankara. And the first reaction came from the Kremlin.

The Russian delegation will not come

Of all the reactions that followed from Russia after the news, which first reported the newspaper Dünya, the greatest attention is drawn to the statement of the Rosselkhoznadzor… He announced the desire to create an agricultural company in Turkey in order to grow their own food and “ensure food security”, and announced that the lifting of the ban on the import of tomatoes, cucumbers, apples and pears from Turkey are planned. In a statement the Ministry of agriculture of Russia was said to discuss a full or partial lifting of restrictions on Turkish products, Turkish side needs to terminate the prohibitions imposed with respect to the products purchased from Russia. Moreover, in April Turkey was to visit the delegation, which can make the decision on the abolition of certain restrictions, but this visit was cancelled.

Back 16 tons of quince

One of the most important fronts of food tensions, the ongoing mainly between tomato and wheat, and fruits. Russia uses the limitations not only in relation to tomatoes, but these come from Turkey products, such as quince. So, the other day at the checkpoint “New yurkovichi” Rosselkhoznadzor was not allowed the transportation of fresh quince, arrived from Turkey. Service that as a reason pointed to the fact that ive brought from Turkey does not comply with sanitary standards and contains no harmful organisms, took 16 tons of product and returned the quince Turkey.

Tomatoes — the most important front

Okay, but what turns food price tensions between the two countries?

It’s good to say. The most important articles in this tension — tomatoes and wheat…

Turkey’s share in world exports of tomatoes to 4.5%. Tomatoes account for 62% of total vegetable export of Turkey. The embargo that Russia applies in relation to Turkish agricultural products since the beginning of 2016, is most influenced by producers of tomatoes. In 2015, we sold Russia’s tomatoes in the amount of 259 million dollars. In 2016 — just for 87 thousand dollars. Stopped the sales of another important product — the seedless grapes. Sales of $ 70 million in 2015, fell to zero in 2016. In the export pomegranate loss 77%. The export value of $ 35 million in 2015, fell to 8.2 million. If you look at the overall picture, our exports of fresh vegetables and fruit to Russia, which amounted to 875 million dollars, has decreased by 62% and fell to 331 million dollars. If we imagine that our total fruit and vegetable exports — $ 1.9 billion, Russia’s share more than half.

We are among the most important customers

The probability of the lifting of restrictions no

Minister çelik: not retaliation, and the requirement importers

The Minister of food, agriculture and livestock Faruk çelik (Faruk Çelik) is considered incorrect wording such as “We also limited the import of Russian products, especially of wheat.” He said, “This is only a requirement of the importers. Importers act on the basis of what and where they intend to buy. In agriculture, the two countries should make reciprocal steps that will satisfy farmers. We have such statistics. In Russia we sell tomatoes for $ 250 million, but these tomatoes enter Russian market through third countries. Know about it and the Russian authorities. We say, why do I need to do it indirectly when you can sell directly? At one point our sales of product “A” in some of the country increased 10 times, 100 times, a thousand times. What does it mean? Providing Russian needs in that market. I am convinced that we should not resort to all this and will be correct if in all areas, we will act in the framework of the obligations which fall on us as two friendly neighbouring countries”.

Charge d’affaires of Russia was summoned to the Ministry

The official representative the Ministry of foreign Affairs Muftuoglu (Müftüoğlu) stated that after the death of the Turkish military as a result of the fire opened from the territory under the control of the Party “Democratic Union” (PYD) / Kurdistan workers ‘ party (PKK), charge d’affaires of Russia in Ankara was summoned to the Ministry. “He was told what to do all the necessary to avoid such accidents in the future, if this happens, the terrorist organization will be given an adequate response,” said Muftuoglu. To answer the question of Turkey’s demands to close the PYD office in Russia Muftuoglu noted that Turkey on each level is divided with Russia his views on various terrorist organizations affiliated with the PYD, the PKK terrorist organization, and their offshoots. “It is a known fact. We expect Russia to take steps towards closing this office,” — said the spokesman.