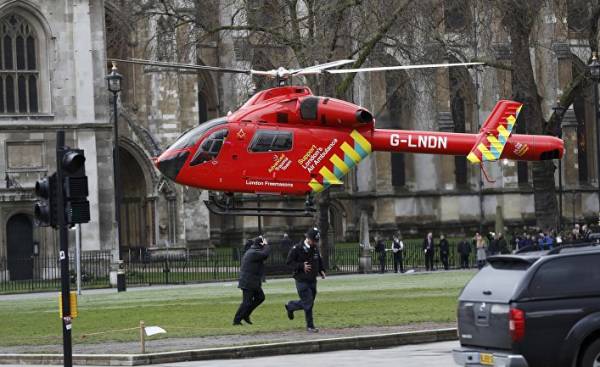 That reminds me of the act of violence in London, I’ll tell in the next four paragraphs.

— Last week, 120 British military was on assignment for NATO sent to Estonia and met with a special ceremony. The British press wrote that the military was sent to contain Russia.

The day before yesterday the US and Britain imposed a ban on the transportation of laptops DVD players in the cabin. The ban of airlines from eight countries, including Turkey. It was reported that this measure was adopted in connection with warnings of imminent terrorist attacks with the use of electronic devices. However, a person who has committed a terrorist attack in London, was nothing but a car and a knife. With this incident, we once again saw a bitter reality that was known to us. If the offender decided to commit the act of terrorism, even weapons ban, and not that of the laptop, may not benefit. When terrorism changes the tactics, the task of the police and security forces is complicated.

— ISIS for two and a half years threatened the UK. If it becomes clear that the attack made by the LIH, it will be the first attack that this organization takes aim at the UK on its own territory. This may indicate that the attacks in Metropolitan areas will increase.

What is this fight?

State easily see the dirty games that are played against them. But if it is in their power, they hide the known truth, even from themselves.

Not all States, concealing attack with which they are faced are the same. There is a group of States that follow the principle of secret retribution. For example, Russia… Major Western States that can afford to use the power of many international organizations, whether military, political, commercial or civil, we can also fall into this category.

Remember the assassination attempt committed on the Russian Ambassador in Ankara Charles on December 19 of last year… have you Heard from Putin’s mouth is a word with a direct accusation against any power center? Not heard and will not hear. Another example, more recently, Montenegro. The assassination of the Prime Minister of Montenegro, insisted on membership in NATO, in October of last year, was at the last moment prevented. The Western press wrote that the conspiracy is Russia. The goal? To kill the Pro-Western Prime Minister and his place to lead the Pro-Russian leader. Despite the fact that the plot is fairly transparent, the leading countries of NATO released no sound.

There is a second group of States. They love to notice prepared by outside economic, political, or intelligence operations with which they are faced. Their priority is to avoid tension. This category includes many average, small countries and even such large countries as Indonesia, Japan and India. In order to keep the likelihood of reaching an agreement, the leaders of these countries do not depart from the principle of compulsory silence.

Until recently, Turkey was in the second group. This preference was the result of a strategy that has both advantages and disadvantages. Turkey (except for intervention on Cyprus in 1974), so as not to fall under the hot hand of strong States, always stood in the place where she said “stop”. It was Turkey that agreed on the role of semi-independent state given by the West. The disadvantage of the old strategy was the rejection of ambitions associated with becoming as the center of civilization. And the advantage of this approach was the possibility to be upgraded under the protective wing of the West in that measure in what it allows.

At this stage, Turkey believes that the agreement can no longer continue. Ankara, despite various attacks, refuses demands for a more equitable agreement.

Although we are talking here about the ban on the transportation of laptops, the statements of the West in support of the terrorist organization FETÖ of Fethullah Gulen (Fethullah Gülen), the Kurdistan workers ‘ party in the subject matter — it is this struggle. The West wants to carry out in Turkey the fact that Russia failed to do in Montenegro. The situation is complicated by the fact that about Turkey’s demands Russia thinks almost the same as the West.