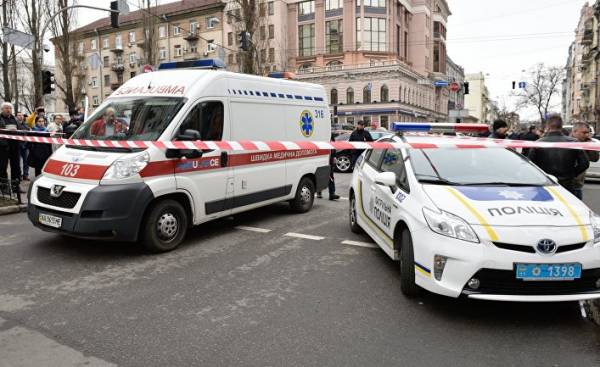 Denis Boronenkov and his wife, Maria Maksakova in February shocked the inner circle of Putin.

Two former members of the Duma fled from Moscow and sought asylum in Kiev. Here they made a sharp criticism of the Putin regime. At the same time in the Kremlin-controlled media dubbed this pair of traitors to the Motherland.

Thursday in the morning Voronenkov was killed on the street in Central Kiev.

Killed in front of the hotel

The murder occurred in front of the hotel “Premier Palace” hotel on Shevchenko Boulevard in Central Kyiv.

“We have received thousands of threats. Who knows what these crazy people can do,” said Maksakova.

Today pregnant Maksakova became a widow. The couple already have one child.

The members of the elected elite of the Kremlin

Until the autumn of last year, Boronenkov and Maksakova belonged to the inner circle of Putin.

Voronenkov was a bureaucrat, whom nobody knew until then, until he was elected to the Duma in 2012.

Like the rest of Moscow politics, he amassed a large fortune. Boronenkov left Russia a few days before he expired of his parliamentary immunity.

“A typical Russian politician”, wrote about him in the independent “Novaya Gazeta”.

I was a conformist

In Moscow against him was under investigation in connection with economic crimes, it was about raids of several valuable buildings.

Himself a Crow and his wife believed that it was revenge for the fact that they no longer wanted to play by the rules of Putin:

“I do not deny. I was trying to survive in Putin’s reality,” said Boronenkov in a recent interview in Kiev with Internet newspaper Gordonua.com.

“In my past life I was a conformist, who tried to survive in the system,” he said.

A few hours later after he left and started to criticize the Kremlin, the Russian police have a Bolo out on him.

Spouses represented as a symbol of love and unity, because everyone in the state Duma spoke for his party.

The head of the powerful Federal foreign intelligence service of Russia Sergei Naryshkin, who at the time was speaker of the Duma, sang a duet with the bride.

The failure to protect the main witness

Today’s murder of Kiev is also a scandal for the Ukrainian authorities.

In January Boronenkov agreed to testify against the deposed President of Ukraine Viktor Yanukovych. Boronenkov told how Yanukovych asked Putin to send the army to Ukraine.

The Prosecutor General of Ukraine Yuriy Lutsenko boasted at a press conference on 28 January that got a new key witness in a Russian parliamentarian, but did not mention his name.

This was enough for the Kremlin and Russian media understood that Voronenkov defected to the other side.

So his wife and were called traitors on the major television channels of Russia.

“Murder Boronenkov in the center of Kiev is the state terrorism of Russia”, — said the President of Ukraine Petro Poroshenko as soon as it became known about the murder.

Voronenkov was killed along with his guard, the head of the Kyiv police Andriy Kristenko Ukrainian media.

“Handwriting of the Russian special forces was shown several times on the streets of European cities,” — said Poroshenko.

“Absurd accusations. We hope that the murderers and those who stand behind them, will be found,” — said Putin’s press Secretary Dmitry Peskov.

Many unsolved murders in Kiev

When Boronenkov and Maksakova escaped, the extra sensation was that they chose Kiev.

Earlier defectors from the ruling elite, Putin preferred other locations, such as, for example, London or Cyprus. Voronenkov was half Ukrainian.

After the revolution of Maidan in Kiev occurred a few murders which are still unsolved.

As a member of the anti-corruption Committee in the Duma Boronenkov participated in the dismissal of 15 leaders of the FSB.

Ponomarev was the only one Duma politician who voted against the annexation of the Crimea and was forced to flee from Russia after several threats to be killed.

“I met with him every two or three days and know exactly what he was working on. He used all the time to cooperate with the Ukrainian investigators,” — said Ponomarev.