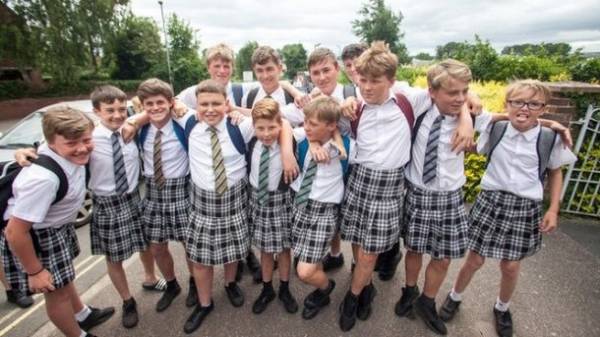 30 students of the Academy in the British Dewline spoke out against strict school rules. Young people come to class in plaid skirts, appropriate dress code for girls, reports Buro24/7.

The reason for this action was the weather in England this summer. When the temperature exceeded 30 degrees, the boys turned to their teacher and asked to come to school in shorts. In response they heard that such clothing is not provided with uniforms.

Guys outraged by this response, because girls are allowed to wear skirts and bare legs in hot weather, and they — no. “You, too, can wear skirts,” — said the teacher to the arguments class.

No sooner said than done. The next day all the boys came to class in skirts. Some of them even shaved my legs. Parents supported the young protesters and helped them find the missing piece.

The protest of the disciples attracted the attention of local media, and school administration was forced to respond to their demands. The headmaster promised to consider this question, to avoid misunderstandings in the future.