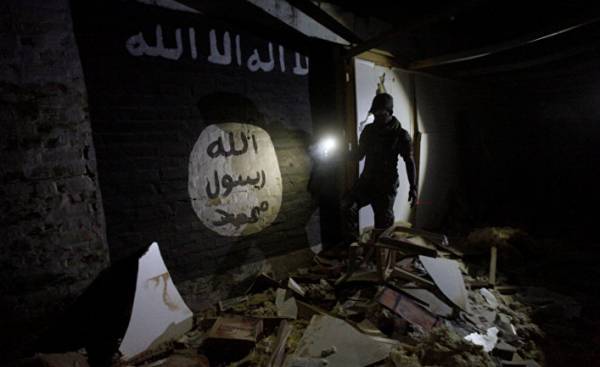 This tunnel was training fighters of elite units is (organization banned in Russia) for participation in the battle for Mosul.

Here you can see the hard obstacle and also Islamic slogans, drawings on the walls, mattresses, worn-out Slippers and Ironing Board. It all tells about how he lived the ISIS forces, preparing for war with the “cross-coalition” and for the battle that is now coming for Mosul in Northern Iraq.

Secret training base located under the hill near the village of Abu Saif ten kilometers South of war-torn Mosul.

Here passes the railway line, the former at the time part of the old line of the Berlin-Baghdad that was supposed to make reality the dream of Kaiser Wilhelm (Wilhelm) on the German influence in the oil-rich Persian Gulf region.

It’s been a while since then, between Mosul and Baghdad trains stopped, but if they are here now still went, you went in a short tunnel Abu Saif. However, the entrance to the tunnel today is almost completely blocked by a huge pile of the clay of the earth.

If someone tries to crawl through the pile, then the clay will stick to the Shoe like a lead balloon on the glue. But if sliding down the other side, it will fall inside the train tunnel, and on the training database of the most violent in the world of the Islamists.

Railway tunnel with a length of 500 to 1000 meters were converted the Islamic state into an underground obstacle, which, according to the report of the representative of the Iraqi army, were found a little over ten days ago — after the offensive, launched on 19 February this year to regain control of Western Mosul.

Rails and sleepers were thrown out. The training base was built after ISIS captured Mosul in June 2014, overtaking the entire world and especially the Iraqi army. What training base has decided to place under the ground, due to the fact that ISIS, of course, feared the air strikes of the coalition led by the US.

In all the places wrested from him, was found tunnels that were used to shelter from air attacks. In Mosul ISIS militants, in addition, punched holes in the walls in contact with each other. Thus they were able to move unnoticed inside the houses.

The value of food

The first thing that catches our eyes at the entrance to the tunnel is the kitchen. Food was prepared in this part of the tunnel, because it was closer to the place where he received food, but also probably because it is near the end of the heavy obstacle. The signs indicate that overcoming the obstacles it had to pass in this direction. 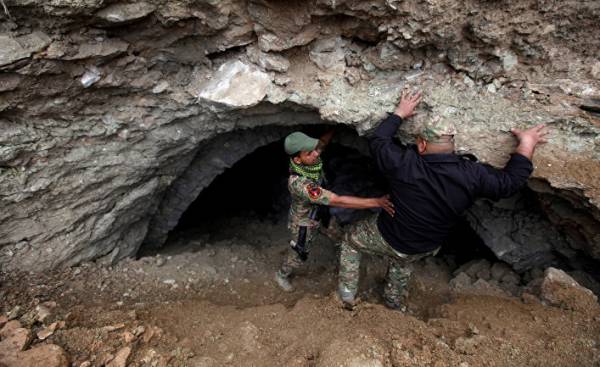 We have not mentioned two vehicles parked there. It is a sort of motorcycle with two rear wheels and body and a white small vehicle like a cart used to transport Luggage at airports. He apparently took from the airport of Mosul, which is not far from here.

So here was the kitchen, strategically placed in the end of a hard obstacle. This tunnel is seven meters in height and width five — dark and a little bleak, although we have good lighting with lights mounted on the head, light camera and illumination mobile phones.

When the militants were here, there was pretty good lighting. Along one wall there is a strong cable, and in different places of the tunnel scattered fragments of disrupted larger lamps.

So here, on the obstacle course with a length of several hundred meters to several tens of serious obstacles, practicing Islamic recruits. They had to jump over the pile of bus tires, filled with concrete. Climbing rope, climb the mast and go down the rope down.

We see a coil of barbed wire, thrown on the ground, a few meters from it we see, using barbed wire. The classic obstacle of all military training bands: hole full of dirty water, with barbed wire draped over it at low altitude. Now the clay were dry, but the pit is, of course, was filled with liquid mud, when there were militants. We noticed one of sandals, half sticking out of the dried clay.

Lots of sandbags. This is probably evidence that the militants were to take on these bags to increase training load.

“It’s like our preparation. This SWAT training,” said one Iraqi soldier who earlier this month was checking apparatus Reuters. Soldiers serving in the special forces of the Iraqi Ministry of the interior, the so-called rapid response unit. This unit, according to the news channel Rudaw, found this tunnel.

To raise the morale of ISIL militants a few walls were decorated with drawings of red flowers with green leaves. But the most common wall decoration, the cheerful slogans about the greatness of the Islamic state.

We read that “our Mujahideen (Holy warriors) win in the world”, “we March to victory over cross-coalition, if God will,” and “the Islamic state will stand, because God has accepted Jihad in the same way as the sun in the sky”.

We will conquer Rome

About the middle of the tunnel we found a large drawing of the ship, going to town and the beach under a bright red and orange sky. “We will conquer Rome, if God will”. This slogan is associated with the ideas of the ideologues of ISIS that the Caliphate will one day conquer the Bastion of Christendom and the whole world.

Instructors also had to assume that militants in the training base need a moral guide. “Not taking what is right, will be rejected by God,” reads one of the slogans. “ISIS will survive, because we don’t do Haram (something that violates the Word of God)”. And closest to the start line, “Now, here comes the war”.

For a start line we find a small ruined building, arranged inside the cave. In Arabic it says “Clinic”. Apparently, exercise has been associated with injuries?

There are signs that the militants are trained in the tunnel, spent the night there for a while. Two premises that couldn’t be there earlier, carved in the rock on both sides of the tunnel. Under a low ceiling lie the remains of the bed and dozens of cartons with the words “Komandos Shoe” (boots).

But the tibia is not visible, only visible scattered around the shoes more pathetic variants type sandals or open Slippers with elastic band for the toes.

It is likely that most were foreigners

The first soldiers who received information about the tunnel from the locals was also part of the documents. These materials showed that most of the fighters held a training session here, were foreigners. So said the Iraqi commander, who asked not to be named, Kurdish news channel Rudaw on 1 March.

The intelligence officer suggested in an interview with the Wall Street Journal that 70% to 90% of ISIL fighters remaining still in Mosul, are foreigners. Most of them come from Saudi Arabia, Yemen, China, Tajikistan and Russia.

The Iraqi commandant also claimed that there are indications that children and adolescents were here training for terrorist attacks and other acts of war. The commandant, apparently, drew attention to the fact that in many places scattered shoes in very small sizes.

One Reuters reporter, who visited the tunnel several days later, he writes that the pink duvet covers found in the tunnel were decorated with drawings of Mickey mouse. Own ISIS propaganda shows how the education of children who should be obedient militants since early childhood. A video ISIS posted on the Internet, also shows that children threaten to turn them into living mines.

In the early days here there were still a lot of short books explaining the uncompromising ideology of the organization, writes Reuters.

Everyone should know the direction of Mecca

In the depths of the tunnel we also found a room that was obviously a mosque, on the opposite wall from the entrance there is a painted arrow with the text, which reported that “Mecca is in this direction.” Muslims should always turn towards Mecca while praying that the recruits of ISIS was, apparently, to do five times a day.

Further in the tunnel we found a lot of sandbags, which are almost completely closed opposite the exit from the tunnel. Before going there, we found signs that refers to the more prosaic needs of the great masses of men together performing heavy physical work in a tunnel with limited ventilation: five cabins with a shower, a washing machine and the only Ironing Board.