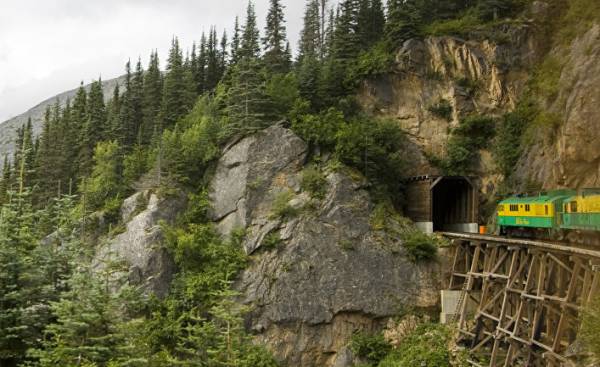 There was a time in America, and not so long ago it was, then the candidates for the highest post in the government was checking whether they can take such a position. Asked typical questions, check had to prove that they have sufficient knowledge about the world, to lead the nation. So it was with Sarah Palin (Sarah Palin), the former Governor of Alaska and Republican nominee for Vice President in 2008. On a question about which she has knowledge about relations with Russia, glib politician from the province in the far North America replied: “they are our neighbors, right at our doorstep. With the coast of Alaska Russia do you see”.

Then Russia and the USA had what trump wants now: common interests

Nothing really new in terms of foreign policy, this statement does not contain, why, then, was such a sensation. True it was that Russia and the United States in the Bering Strait within sight come close to each other. Only four kilometers share a Big (Russian) and Small Diomede island (American). Indeed, at least from a historical point of view, the relationship between the United States and Russia are very close in the 49th state of the United States: because Alaska was a Russian Outpost in the New world and over the centuries belonged to Russian Empire. However, 150 years ago, precisely on March 30, 1867, Russia sold the US a colony on the American continent. $ 7.2 million was written on the receipt US Treasury, Ministry of Finance, by today’s standards, $ 120 million — of course for nothing.

At four o’clock in the morning, Saturday morning, the Minister of foreign Affairs USA William Seward (William Seward) and Russian envoy Eduard von Stöckl (Eduard von Stoeckl) after a night of talks at the state Department agreed on a price for a transfer of territory. The new York times reported that after five hours they were both represented in the White house and the agreement was submitted to the President. Andrew Johnson (Andrew Johnson) that morning signed the contract and in exactly half of the third agreement was in the Senate in the Capitol for discussion. So early were you doing in Washington.

Almost a hundred years before the coast of Alaska was opened by the Dane Vitus Bering during one expedition and rough outline mapped. It was named after the Strait between America and Asia. Behring was in the way on the instructions of the Royal court in St. Petersburg, and thus the new earth after its discovery in 1741, and after confirmation that there is no land connection between Asia and America — went to the Russian crown.

Four years later, to this place came the first Russian hunters for fur-bearing beast. First, however, they were limited to the Aleutians, a chain of Islands from Alaska in the direction of the Asian continent. In 1783, the hunters built their first permanent settlement on the mainland. In 1799 Tsar Paul I granted the Russian-American company, the Union of several societies of hunters for the furry animals, the profitable trade monopoly in Alaska.

The boom did not last long. On animals, primarily on sea otters, ruthlessly hunted and almost exterminated them. The number of hunters again greatly reduced, while the number of residents in the village did not grow even in the good times they were no more than 800 people. They were hunters for fur-bearing animal, kaplanski and missionaries who wanted to convert natives on the Aleutian Islands and on the mainland (and even today there are Russian Orthodox diocese in Alaska, which has almost 50 thousand believers, primarily among the Inuit). A trip to the distant colony of Saint-Petersburg was literally a half trip around the world and lasted more than six months, no matter whether sailed via the Cape of Good hope or Cape horn. All these are bad preconditions for the preservation of the colony.

At the end of 1850-ies have St. Petersburg finally lost interest in distant possession. The Crimean war with Britain, France and the Ottoman Empire was lost. The conflict revealed the strategic vulnerability of Alaska: Russians will never be able to protect far-flung territory, if a naval superpower Britain then decided on the annexation of the colony. Besides, after the war, Russia needed money. With the blessing of the king’s diplomats secretly put Alaska in 1859 for sale.

The British immediately dismissed, but Washington is quite interested. Then between Washington and St. Petersburg was something what Donald trump can really dream of: a fundamental convergence on important strategic issues. And they were treated and what the UK saw as an opponent. So Russian and so would prefer to have US as a neighbor in the far East than the British, who ruled in Canada (the distribution of power and authority in the first half of the 20th century and during the cold war, then it was impossible to imagine). Expansionists in America again saw a long coastline in the ownership of the United States — from San Diego to the Arctic circle. The beginning of the civil war in the United States in 1861 for some time interrupted these dreams.

After the war, they surfaced again, and as the Russian still needed money, then Alexander II in 1866, was again probed the situation. The king personally puts five million dollars as a minimum amount, however, is his messenger, experienced negotiator Stöckl, successfully inflated fee of up to seven million dollars. In last night’s foreign Minister, an ardent expansionist, was making 200 thousand dollars order to finalize the deal.

“Don’t fool around, America, give us Alaska back!”

Americans have not thanked him for it. On the contrary, they laughed at his bright-eyed foreign Minister. In the press about the contract responded negatively. The new acquisition was called the “Ice box of Seward” or “Seward Folly” criticized for squandering millions of taxpayers ‘ money, because the economic benefit from the vast territory until it was clear. About oil at that time never said, on deposits of gold, too, yet no one suspected. It seems that the land is fit only as a base for American whalers. And as a strategic bridge.

Therefore, the new York times supports this deal: “there can be no reasonable objection to the acquisition of continuous territory, which until now was known as Russian America,” reads the April 7, 1867. So it is possible, according to the newspaper, to prevent that the UK has not taken possession of the whole Pacific coast North of the United States. Two days later, the Senate overwhelmingly approved the purchase. 18 Oct 1867 Russian settlements at Sitka, the former main settlement in the colony, the flag is lowered with double-headed eagle. Guns of the American warships at anchor in Sitka rises and salute the starry flag of the United States.

However, Alaska is just the beginning. The number of inhabitants of Sitka in less than a year is reduced from 2,500 to a few hundred. Still life in the far North too harsh. Only the gold rush of the Klondike in 1896, will lead the crowds in ports in the South-West coast territory — and long-chain people will be drawn to the Klondike, almost on the border with Canada.

And yet one is not particularly interested in this place. He manages the army, the Ministry of Finance or the Navy. In 1912 Alaska gets the status of the United States, with the Deputy in the Congress of the United States. The strategic value of the land becomes clear to the Americans during the second world war, when their troops with bloody battles drove out the Japanese invaders from the Aleutians. After 1945 the cold war begins. US forces never get this close to turn into bitter enemies as the Russian bases in the far North.

By this time the first serious attempt to make Alaska a US state. But only when in the mid 50-ies will discover large oil deposits West of anchorage, the work has progressed. January 3, 1959, the former Russian America officially became the 49th state of the USA — a territory of 1.7 million square kilometers, with the largest margin in Tennessee and is the little populated. Today, Alaska is home to at least three quarters of a million people.

First a great earth hangs like a heavy appendage to mainland America. Washington should pay for the new acquisition. However, the wild 60 years changed all in Alaska: in 1968, at the 70th latitude, that is another 400 kilometers North of the Arctic circle, find the oil, and as much as anywhere else in the United States. Starts booming, which makes a starving state for the rich and its inhabitants too. The oil revenues of the state-funded meanwhile a 55 – billion oil Fund, the permanent Fund, which since 1976, every resident of Alaska year after year makes a profit in 2015, that was over 2 thousand dollars. In this sense, “Seward folly” paid off.

May not last and the couple eternal nationalists in Russia consider selling Alaska’s vast stupidity, but, clearly, not Seward, but the king and willingly would have received it back. A group of “lube” writes the 1991 hit called “don’t fool around, America”, which States: “Russia and Alaska — the two shores of one river. Give us our land back.” The nationalist group is one of the favorite bands of Vladimir Putin. In one of the press conferences on TV two years ago, he was asked: “are There plans again to join Alaska to Russia”? However, the most powerful man in Russia did not go so far. “So hot,” he put it in place who asked the question, ” why do we need Alaska?”