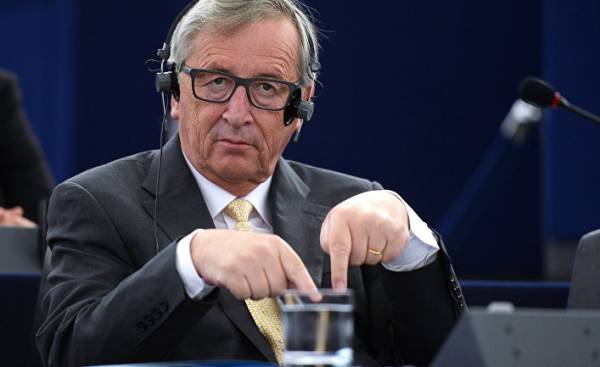 We meet 62-year-old Jean-Claude Juncker in Brussels. The office of the President of the European Commission is on the 13th floor of the Berlaymont complex. By the walls to the ceiling — filled with shelves of books.

Welcome Juncker patted on the head by our photojournalist — President of the European Union is known for its cordial sociability. Because next week the EU will be 60 years old, we brought a cake.

Bild am Sonntag: Mr. President of the European Commission, next week the European Union is 60 years old. This will be the last round anniversary?

— Taking into account all existing problems, do you have a festive mood?

— When I look at what has been done in these 60 years, I have a festive feel. Europe was reborn from the ashes of the Second world war. The war generation, who returned from the concentration camps and different sectors have developed a project on the scale of millennia. We should never forget.

— And unless Europe breaks up again into separate national States?

— At the beginning of the 20th century, Europeans made up a quarter of the world population, and at the end of the 21st century, we will reach only about 4% of the 11 billion inhabitants of Earth. Someone who believes in the opportunity to once again divide Europe into separate parts, just did not understand. If I was from Monaco, I would have subjected to criticism the fragmentation into small States.

— Who of heads of state and government will receive at the end of next week a piece of cake on the plate and who will run the pie in the face?

— I won’t give up the cakes. I would love to were treated to an anniversary cake all the generation that made possible the creation of a peaceful and United Europe — war generation. We stand on the shoulders of giants, and therefore we ourselves seem high. But I have the impression that today, fewer and fewer Europeans are working full time, and more and more Europeans are part-time. Europeans incomplete working day take from Europe what, in their opinion, they are entitled to. However, they do not bring that in General it would be possible then to distribute.

— Who is the last European full working day among current heads of government?

— In late April, France will choose a successor, Francois Hollande. The European Union will cease to exist if they win marine Le Pen?

— The European Union will survive, marine Le Pen because she will not be President. But even if she becomes President, it will not mean the end of the European project. However, this option would be a disaster for us. And so I hope that France will win the Pro-European forces.

— During the elections in the Netherlands against the European Union (Geert) Wilders received fewer votes than many were anxiously awaiting. Does this mean the end to the triumphant right-wing populism in Europe?

— These results are a good sign for the elections in France and in Germany. How may I distinguish between right-wing populism, which I reject, and euroscepticism. The arguments of the people dissatisfied with the state of the European Union should be taken seriously. Europe does a lot right, but some things she’s doing wrong. I appeal to all staunch Europeans and urge them to ensure that they finally started to do something. If they continue to sit on the couch, while right-wing populists will be in effect, these last will always have the advantage.

Juncker adds a bit of humor in his words, and sometimes irony. When it comes to charges of Nazism by the Turkish President, Juncker becomes serious and can lead their personal arguments.

Elections in the Netherlands was marred by the conflict with Turkey. Can remain without consequences, the fact that Erdogan called the Europeans by the Nazis?

Is my home country, Luxembourg, was occupied by the Nazis. My father and his three brothers were forcibly drafted into the army. Totally unacceptable when the President of the country, is on the way to Europe, indiscriminately insult the victims of fascism. Erdogan’s words are an understatement of the seriousness of the problems associated with the national socialists and fascists of all stripes.

— The Dutch government has imposed a ban on the entry of Turkish politicians.

It was the right reaction.

Whether in this case a ban by the entire European Union?

— The EU should confine themselves to their own responsibilities. Everything that is connected with the social order, refers to the internal Affairs of individual member States. Each country must decide on how to apply in its territory with the Turkish participants of the election campaign.

— Such debates can not be called serious. Makes no sense to Express your anger and to stop the negotiations that are already underway. But one thing is clear: the rhetoric with which the Turkish leadership is accompanied by a referendum on the Constitution, is perceived as sharp and annoying voice in the European concert. I am very committed to harmony, and therefore such a sharp manner of speaking I don’t like. Turkey’s accession will not interfere with the absence of such desire of the member countries of the European Union, and the reluctance of the Turks to enter the European standards.

— Making the European Union for the release from prison of these Turkish journalists as the correspondent of the newspaper Welt Denise Ucel (Deniz Yücel)?

— All European governments are demanding the immediate release of the journalist. Mr. Ucelo nothing to reproach himself, except that he openly expresses his opinion, and that democracy is not only permitted, but encouraged.

— And where is the red line of the European Union for Erdogan?

— If Turkey has been the death penalty, it would be tantamount to termination of the accession negotiations.

— What does this conflict relating to the integration of Turkish migrants in the member States of the European Union?

— With regard to the millions of Turks living in our part of Europe, they for me it is no problem. They are well integrated and contribute to the General welfare. There is a big difference between the Turkish people and the Turkish leadership. Not all young Turks are Erdogan.

— A year ago, with Turkey, an agreement was signed regarding refugees. Did not Europe as a result of possible targets for blackmail?

— No, the EU cannot be blackmailed. Turkey will not break the agreement, although Erdogan has several times threatened to do it. But I’m impossible to scare these threats.

— Turkey is not interested in the fact that at the Turkish coast all commanded by smugglers and bandits. Association with gangsters may not be included in the ambitious plans of the candidates for accession to the EU. This agreement is effective. If within 11 months before his imprisonment, about a million refugees arrived from Turkey to Greece, during the 11 months after that — less than 27 thousand, a reduction of 97%.

Even Angela Merkel calls recently to conduct a greater number of deportations. Is this part of the glorified culture of hospitality?

— The culture of hospitality is not dictated by governments — it is people’s behavior. Tens of thousands of Germans were assisted, and there is no reason to hide it. The Germans have shown the world something, with the result that Germany became more cordial and friendly in the perception of people.

But in politics dominated the culture of separation.

— If the German authorities to apply German and European law and send people who have no claim to asylum, then I don’t see any departure from European values.

America while Donald trump remains a reliable partner of Europe?

— There was a sort of alienation. The fact is that the American President welcomed the desire of the British to withdraw from the European Union. He also States that other countries should follow this example, and this is an unprecedented position. There is a need to conduct intensive negotiations.

— Europe is able to conduct a trade war with the United States?

— Counter-question: are Americans ready to wage a trade war with Europe? A trade war would not be in the interest neither of Europe nor the interests of the United States. But we have to take seriously the protectionist statements of the administration trump and be ready. I am glad that on Tuesday I will meet with Japanese Prime Minister. We this year intend to conclude a free trade agreement between the European Union and Japan.

— Will there be a hard Brakcet?

— As soon as the corresponding letter will go to Brussels, we will begin negotiations on how to pass the output of great Britain. We are ready for it with millimeter precision.

— How will the relations with the UK after its exit from the European Union?

— The UK should be prepared for the fact that it will be treated as a third country. Membership half or retrieve raisins out of the buns will not. In Europe, eat what is served on the table or not sitting at the table.

— In Germany as candidate to the post of the Federal Chancellor acts as your friend, Martin Schulz (Martin Schulz), with whom you are comfortable, and today he is elected as party Chairman of the SPD. You happy with it?

Martin Schulz is a friend of mine, but I’m not responsible for the happy moments of the German social democracy.

— You will still every morning to talk with Shultz on the phone?

— Not every morning, but regularly.

— Do you think that he fits the position of the Federal Chancellor?

— I don’t have the right to vote in Germany. And Martin Schulz and Angela Merkel have the qualities necessary for the Federal Chancellor. Both major parties know who they choose as the main candidates.

You know Schultz? How is it different?

— It can rely on. He openly expresses his opinion. And he’s very reliable. The same I can say about Angela Merkel, which by the way, I met before with Martin Schulz.

— You have defeated Martin Schulz in the European elections. What would you advise to Angela Merkel?

— I believe that Angela Merkel doesn’t need any advice.

— How much will it members?

— In the European Union will undoubtedly be more than 30 States. But during my presidency, the admission of new members will not. None of the candidates does not meet the requirements.

— And some more countries leave the European Union?

— No. They all see the example of the UK and understand that leaving the EU is not worth it. Opposite — the other member States the result is even greater to fall in love with each other and renew their marriage ties with the European Union.

After more than an hour of conversation and photography Juncker, smiling, asked if he could continue to lead. He can.