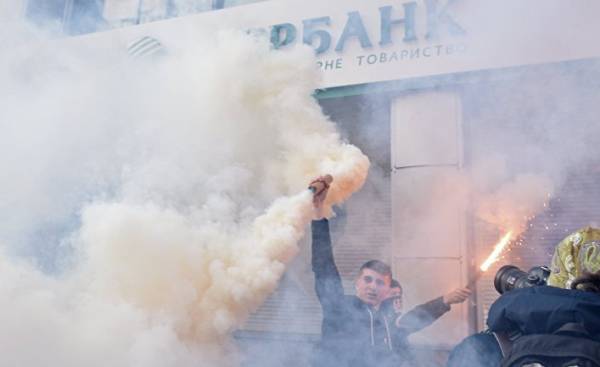 After the statements of Russian banks, including Sberbank, the willingness to open accounts for physical persons having the passport of the DNI and the LC, members of the Ukrainian ultra-nationalist and Nazi groups have reacted violently to this decision and asked for the closure of these banks on the territory of Ukraine.

These groups, mostly of Azov and the Right sector (organization banned in Russia — approx.ed.) attacked several banks and damaged ATMs, walled up the entrance to one of the branches of Sberbank in Kiev, blocking before the entrance to the Bank with barbed wire and burning boards. They also hung posters urging people to withdraw their funds, claiming that these banks will soon be closed: “Attention! Bank of the aggressor will be closed in the near future. Take your money as soon as possible”.

Also attacked was subjected to Alfa-Bank, whose branch of the radicals threw stones during a demonstration in support of the blockade of Donbass on Maidan. And of course, the Ukrainian police haven’t arrested anyone for the vandalism.

Ukrainian authorities can’t take action against those Nazi organizations, which own the real power in Ukraine. Fearing a coup, they decided to support them and to impose sanctions against Russian state banks located on the territory of Ukraine. Currently, the Central Bank of Ukraine together with SBU are working on this issue to determine what sanctions will be imposed on branches of several Russian banks (including Sberbank, VTB Bank and Prominvestbank).

In the published proposals of the Central Bank of Ukraine proposes to prohibit these banks to make money transfers abroad. In the past the Ukrainian branch of the savings Bank was forced to lower the limit on the issuance of money to its customers in connection with the pressure of the Kiev authorities.

The statements and actions of this kind will provoke monstrous “Bank runs” of these banks. It is obvious that customers will take all your money to put them in another Bank that will provoke the collapse of the Ukrainian subsidiaries.

But do not understand all these “geniuses” is that all banks are the holders of investment and that they are all linked debt and joint capital. Sberbank is 7 Bank of Ukraine with assets of more than 805 million dollars, which works 2 thousand people. This status prompted the Bank management to urge the Ukrainian authorities to stop acts of vandalism and attacks on offices of the Bank and to ensure the safety of their employees.

This situation causes concern in Russia, as noted by the press Secretary of the President of Russia Dmitry Peskov. He did not speculate on the possible development of events (or their aggravation) and stated that the Kremlin is closely watching what is happening in Kiev and reminded that such actions will not remain without consequences for the Ukrainian economy.

“Of course, this situation generally destroys the investment climate in Ukraine. She around the world shows that it is very dangerous and hardly economically feasible to operate on the territory of Ukraine”, — he stressed.

Better not say that. Such actions not only to pull down the Ukrainian economy, scaring off investors from the country: a sharp collapse of Sberbank and other Russian organizations can accelerate the collapse of the entire Ukrainian banking system as a Domino effect. We are talking about the seventh largest Bank in the country that has relationships with other large Ukrainian banks.

And as if that wasn’t enough to undermine the country’s image, the Ukrainian authorities decided to add the new Russophobic nonsense, saying about a possible ban on the entry of Russian participants of “Eurovision” because she acted in the Crimea in 2015. What more to hit the reputation of the country than the measures against the singer of a disabled…

As for the Donbass, as well as with Russian banks, the Ukrainian authorities decided in the end to support the blockade, since they can’t end it. From now on, all freight rail connections with the DNI and LC are prohibited until the return of nationalized enterprises.

This stupid embargo will not affect the politics of the two breakaway republics, which began to export products to Russia, as noted on a press-conferences Alexander Zakharchenko. Worse, the blockade completely contradicts the Minsk agreements, as well as common sense and human conscience, as stated by Denis Pushilin and Sergei Lavrov.

Even the special representative of the OSCE contact group Martin Sajdik (Martin Sajdik) expressed concern about the blockade and stressed that this is a dangerous development of events must be stopped.

“I would like to Express my personal disappointment and concern about this situation, which is not conducive to the success of the Minsk agreements and exacerbating tensions between the parties and affects the process of rapprochement and cooperation. This dangerous development must be stopped,” he said after a meeting of the contact group.

The fact that Martin Sajdik, like other rational people, well aware in which direction is Ukraine heading now, and what it can be fraught with its neighbors. The most optimistic experts believe that the support of the blockade of Donbass (it is designed to soften the radical character and not allow Nazi groups to use it) will bring early elections in Ukraine, whereas more realistic minded experts speak about the future collapse of the country.

So, the President of the Middle East Institute Yevgeny Satanovsky believes that the Ukrainian authorities are unable to keep the situation in the country under control, so as not to contain armed gangs.

“As for Ukraine, from my point of view, she had collapsed, but she still didn’t understand. If the government are not able to organize the functioning of law and order even in the capital, then what can we say about that country? It has former country.”

When the country is falling apart, have cornered the authorities are tempted to use war as a miracle. Stoking tensions with Russia, and DND and LNR, Ukraine voluntarily enters on a dead end road.

As soon as she realizes the hopelessness of the situation, then rush into the last battle, and then collapse like a house of cards. At the time of nationalization of Ukrainian enterprises DND and LNR Alexander Zakharchenko gave Ukraine not more than 60 days. And, apparently, the Ukrainian authorities decided to Russophobic hysteria to do anything to fulfill this dark prophecy.