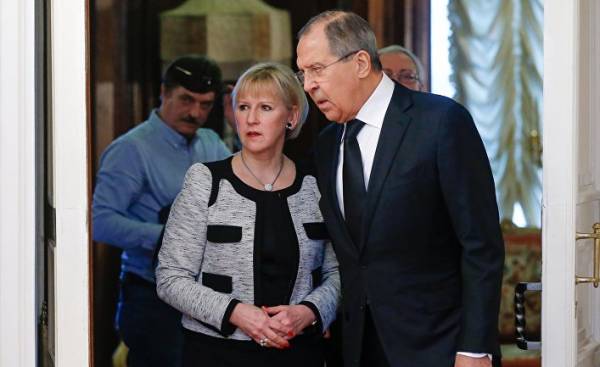 This Swedish-Finnish project to study forests and the sculpture of Anna Uddenberg (Anna Uddenberg). The king of Sweden will present the gifts during his visit to Helsinki in early June.

In an interview with Helsingin Sanomat on the eve of his visit to Helsinki Wallström touched on other topical issues. The conversation took place in her office in the building on the corner of Gustav Adolf’s square in Stockholm.

In the former living room of the Princess Sophia Albertina hangs a massive crystal chandelier, the Windows rise from floor to ceiling, there is a Royal luxury.

Wallström and Soini meet several times a year. The current agenda was the cooperation between Finland and Sweden and the EU.

Meeting in late February, gave the relations of Russia and Sweden new boost after a long cool period. In Sweden there were no such meetings for a long time. Relations have cooled due to the annexation of Crimea, EU sanctions and war in Ukraine.

“In my opinion, the meeting went according to plan. I think she has satisfied both parties. No unfriendliness was not the parties with respect to each other,” says Wallström about the visit.

In Sweden for these event closely watched, since the previous meeting in Basel, Switzerland in the framework of the OSCE summit in 2014, the Swedish media were pretty cool.

Why it is important to establish relations with Russia?

“It is important to achieve mutual respect. At this meeting we had the opportunity to reiterate our principles on the line of the EU towards Russia, sanctions and the rest. At the same time, we need to continue the dialogue. The current situation has become impossible.”

Wallström stressed that the policy of Sweden towards Russia has not changed, despite the resumption of relations. After all changes have occurred: the Minsk agreement must be respected and EU sanctions should be in force until the Crimea captured. But Sweden and Russia needs to be a dialogue to resolve bilateral issues.

The topic of Russia was raised in Sweden is not in the best light — both in politics and in the media. Russia is constantly seen as a threat.

Russian Ambassador in Sweden Victor Tatarintsev recently in an interview with Radio Sweden, with irritation, said the atmosphere in the country and said that the present relations of Sweden and Russia are “the worst in a long time.”

When Wallström asking whether the common line of her country too strict, she says that she does not agree with the position of Ambassador.

In addition, diplomatic relations are maintained. But the dialogue recently conducted through the media, which, of course, far from ideal.

“I think it is better to have the opportunity to talk directly to avoid criticism and try to solve problems that we may have,” says Wallström .

Wallström stressed that the dialogue must be maintained continuously, since Russia is and remains a neighbor. You can cooperate, for example through the Arctic Council on issues of the Barents region.

“We can’t act like Russia doesn’t exist. We need the bilateral relations of Russia and Sweden”.

During a conversation about the future of relations between Russia and Sweden Wallström raises the issue of informational influence of Russia and cyber warfare. She was concerned about the developments.

“Used a lot of propaganda, a picture of what is happening in Sweden is distorted”.

“I don’t believe that it was a constant practice, but recently the situation is. Now things are exceptionally hard,” she says.

A distorted view of Sweden applies not only to the East.

Sweden could feel, including when the US President Donald trump (Donald Trump) has attracted much attention with his statement about “yesterday’s events” in Sweden. Later it turned out that he was talking about the program of the TV channel Fox that tells about the consequences of the immigration crisis and crime in Sweden.

According to Wallström , Sweden now need to illuminate the facts of his domestic policy. The government is trying to explain, for example, what is known about the growth of crime in the country.

“We have, like the other countries of Europe have their problems which must be fought. But we are working on these issues, and we deal with them,” she says and raises the problem of the illicit supply of arms to Sweden.

“I say we invite him, and that he can confirm that in Sweden and Stockholm can be safe.”

Wallström is in the post of Minister of foreign Affairs of Sweden for three years. Her name is known all over the world.

Her career Minister began with the recognition of Palestine. This step like the Palestinians, but angered Israel. The verbal sparring continued. Saudi Arabia Wallström irritated when he described the flogging of a blogger rife Badawi (Raif Badawi) to “medieval”. Her line is the protection of human rights resonated with many.

In their own country, the Minister attracted criticism when, for example, because of this scandal trade relations with Saudi Arabia weakened.

She Wallström does not believe that difficult situations were many. It is not going to deviate from its line. Faced with a similar and its predecessors.

“We have earned the respect that our voice is heard in the world, and are going to continue in the same spirit.”

The Minister well-known for its feminist views. Prior to her visit to Finland wanted to ask how she communicates with Soini? He did not seem feminist.

“We can joke on this topic. I tease him a little, and the atmosphere becomes friendly.”

Russia is experiencing a collapse in the birth rate 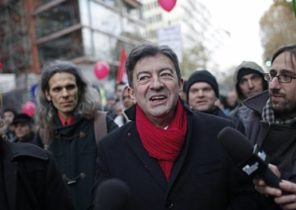