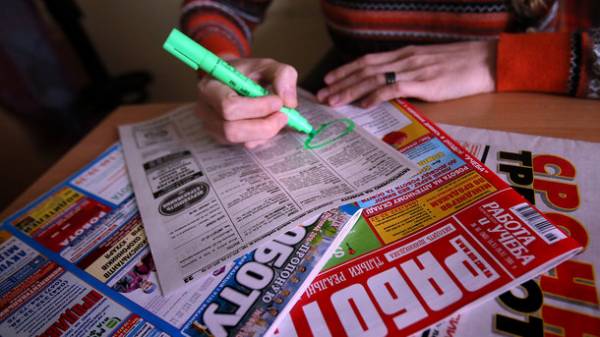 More than a third of Ukrainians working overtime, of which 38% are free. In addition, women are less likely than men to build a career and get a second job — this is evidenced by recent data of sociological research. “Today” learned how to evaluate the conditions of the inhabitants of different regions of the country and what factors affect it.

. The sociological group “Rating” interviewed 1580 working-age respondents from different regions of the country aged 18 to 65 years. According to the results, more than half of Ukrainians have formal employment and the vast majority (88%) are employed (see infographic). 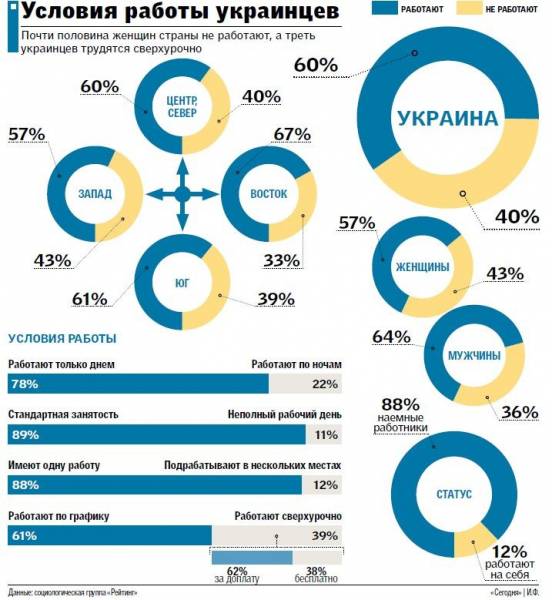 “Working in the East (67%), and less — in the West (57%). The higher the education of respondents, the more of them working,” noted the study authors. According to experts, this trend continues due to the different level of economic development of regions. “To the East is the city-millionika, such as Kharkov and the Dnieper. There is a lot of industrial enterprises, infrastructure development, respectively higher wages and the level of formal employment.

Meanwhile, the study shows that almost half of the surveyed women are unemployed — 43% against 36% of men. “There are several factors. First, women after age 40 is harder to get a new job. Second, most of the female population drops out of labor statistics because of pregnancy and maternity. Thirdly, the girls in my student years, less guys looking for work,” says Pashkina.

HOW THEY WORK. With regard to working conditions, the people most often complaining about stress. “The majority of working respondents cited lack of noise, air pollution, minor physical exertion, comfortable lighting and temperature in the workplace. At the same time, nearly half of respondents noted a very high tension”, — said sociologist. According to experts this can be directly related to the fact that 39% of respondents work very long hours and only 62% of this amount get paid for it. “The fact that Ukrainian employers is dominated by productive approach (payment for an assignment), not process (pay for hours worked). In addition, in reality, compensation for overtime often occurs at the level of individual agreements. For example, if the employee stayed on the job, he is allowed the next day to come late or to take an informal day off. Ukrainian employers are middle managers rarely want to pay cash for prosizhivanie pants at work,” says Pashkina.

The authors of the study and the fact that women in villages and poor respondents were more likely to work part-time: “the higher the education and income level, the less among the respondents those who work at night. While the men work nights twice as likely to women,” say the sociologists.

Motivation and time for family

Almost half of Ukrainians (47%) believe that the more they try, the more money you get. With about as many respondents (46%) have the opposite opinion. “If we’re talking about salespeople and employees of Western companies, what hard work can reward trips and even cars. But in Ukraine, a significant share of the market is small and medium business, where the main motivation is just timely and high salary,” says Pashkina. Meanwhile, 52% of respondents were able to balance work with personal life, 37% — not enough time for family, 4 percent want more time for career. More others complain about the lack of time working parents of two children and low-income staff.