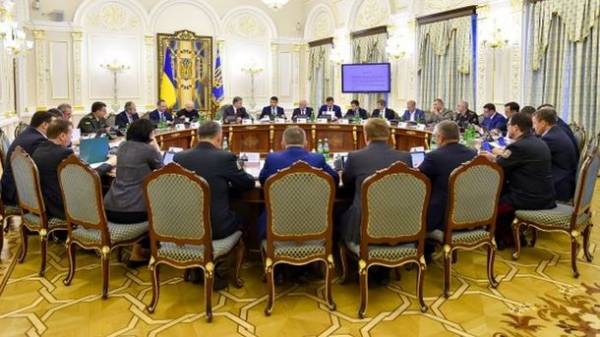 The President of Ukraine Petro Poroshenko on Wednesday, collects the Council of national security and defence to consider the question of possible sanctions to the “daughter” of Sberbank of Russia, said the head of the interior Ministry Arsen Avakov.

“As far as I know, the President on Wednesday gathers the national security Council, and I think that this question (of possible sanctions to the “daughter” of Sberbank of Russia – ed.) there will be included and will be considered”, – he told on air of TV channel ZIK on Monday evening.

Avakov expressed confidence that the Russian banks can work in Ukraine in the current situation, especially after the announcement on the recognition of passports ORDO. “I think that a legitimate way we will settle the matter,” – said the Minister.

As reported, the subsidiary Bank of Sberbank of Russia in Ukraine – PJSC “Sberbank” – has addressed in law enforcement bodies in connection with the actions of activists of nationalist organizations at the entrance to the Central branch of the financial institution in Kiev.

Earlier on Monday, representatives of nationalist organizations in the center of Kiev symbolically bricked up the entrance to Central branch of Sberbank on the street, 46. The entrance to the building closed with shutters, a group of activists erected a symbolic front of the concrete wall.

The protesters called on the Ukrainian authorities to revoke licenses of Russian banks in Ukraine.

For security purposes, the work of the branches of the Bank were temporarily suspended.

In the night of Monday, March 13, in several regions of Ukraine, unknown persons blocked the work of dozens of ATMs of Russian banks operating on the territory of the country. According to “Civil case “Azov”, the activists closed the stained-glass Windows and doors of banks stickers, and ATMs themselves are filled with foam.