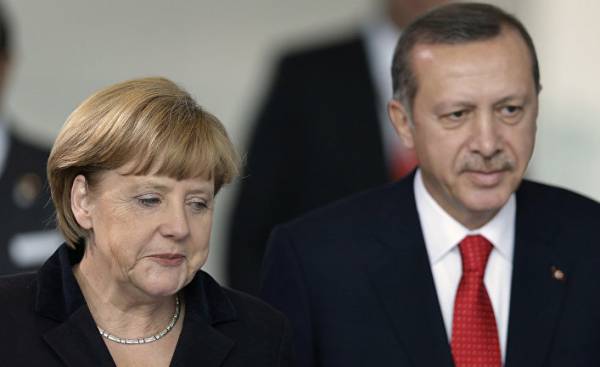 The European Union must as soon as possible unanimously to Express active solidarity with those of its members who Recep Tayyip Erdogan behaves in an inexcusable manner. First and foremost, with Germany.

With each passing day Turkey is getting a little further from the EU. The question concerns not only geography with cartographic schools, which draw the boundaries of the European continent. Disputes, of course, are political in nature, and the recent insults from Erdogan to address the Europeans even more exacerbate divisions between Ankara and the European Union. He should as soon as possible unanimously to Express active solidarity with those of its members who Erdogan behaves in an inexcusable manner. First and foremost, with Germany. The more that the actions of the Turkish leader is clearly hiding a desire to provoke.

Question about whether France was right when he gave permission for the public meeting Turkish foreign Minister Mevlut Cavusoglu with the local Turkish community in the Moselle March 12, is of secondary importance. The meeting was scheduled a few weeks and did not cause any issues from the security point of view. We are talking about one of those meetings, at which representatives of the presidential Party of justice and development are conducting a campaign among immigrants in support planned for mid-April referendum.

It is promising a hard struggle, the vote should prove a constitutional reform expanding the powers of Erdogan. As a result, Turkey, which managed to hold admirable reforms in 2000-ies in the framework of the parliamentary system will switch to a presidential system, which, in turn, will be the completion and legal confirmation of the authoritarian turn of Recep Tayyip Erdogan. The Turkish regime closer to the middle East dictatorial model.

Despite all the difficulties, the opposition, which calls to vote against the referendum on 16 April, the supporters of Erdogan has no confidence in winning. On account of every vote. The AKP seeks to involve the broadest possible mass. The President deliberately overacting in the reaction to facing his Ministers (he sent them to campaign in Germany, the Netherlands and other European countries) obstacles. He understands what it does: using the image of the victim, he plays on the sense of national pride against the arrogant European “Islamophobia”, to attract a maximum of votes. In addition, it tends to provoke a hostile reaction in Europe against Turkey.

Hence a whole series of provocations (“Nazism is still alive in the West”, “the Hague is the capital of fascism”) to the Europeans. Whether the EU can overcome all of this and keep a “normal” relationship with a man who plays with historical revisionism and feelings of the interlocutors? If he could allow Erdogan to the Netherlands to threaten “sanctions”? Of course not.

Neither the geopolitical challenges Turkey or arranged on its territory acts of terrorism, or the requirements of the election campaign, nor the help of Ankara with the Syrian refugees — nothing can justify the silence of Europe to insult Erdogan. It should give a hard but reasonable response. Ban the AKP election rallies in Europe will only strengthen Erdogan in its country policy of suppression of freedom of speech.

In Ukraine warms up to +24, but not all luck: where to wait for the rains