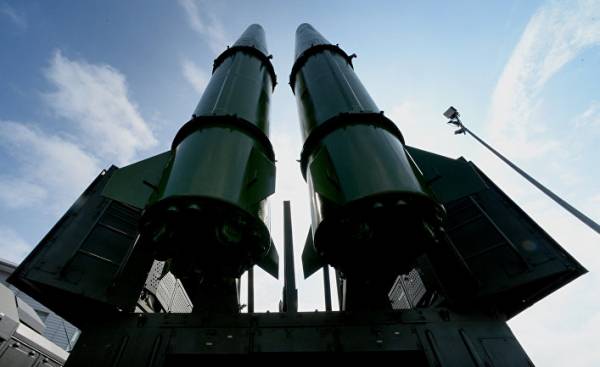 The United States has recognized that the Russian cruise missile, which is contrary to the Treaty of elimination of intermediate and short-range designed to attack American targets in Western Europe. With their help, Moscow will be able to cut the countries of East-Central Europe from NATO’s support.

Vice-Chairman of the joint chiefs of staff, General Paul Selva (Selva Paul) said that the Russian cruise missiles are a threat for most of US military facilities in Europe. He stressed that the Russians put them to “pose a threat to NATO and objects in the area of responsibility of the Alliance.” This is a very important statement because most of them are located outside of East-Central Europe, that will not save them in the event of a strike with cruise missiles.

Americans believe that Russia could use cruise missiles to attack targets in Germany, Belgium or the Netherlands, and the result is to cut off East-Central Europe from the assistance of NATO forces and the United States. In range of cruise missiles, in all probability, will be, in particular, the port of Bremerhaven, where it was unloaded by American tanks, which were then transferred to the Eastern flank.

To date, the majority of commentators believed that the danger in the first place the Baltic countries or Poland, which the Russians can strike with ballistic missiles “Iskander-M” tactical aviation. Adopting a winged long-range missiles, however, may mean that in the zone of potential risk will be bridges or airfields, located at a distance of 1,000 kilometers or more from the borders of the Russian Federation, and this can further complicate the task of NATO forces.

Russian missiles, similar to those used in sea-based missile complexes “Caliber-NK”, which was successfully used in Syria, can hit targets at a distance of 2600 kilometers. They can be used in land-based mobile launchers systems “Iskander” (this complex is called the “Iskander-K”). This means that they can quickly (including by air) to move to any place under the control of Russia, not placing them there on a permanent basis.

The deployment of missiles on ground launchers is a violation of the Contract on liquidation of rockets of average and small range in 1987, which was signed by the U.S. and Russia. The Treaty forbade to deploy ballistic and cruise land-based missiles with a range of 500 to 5,500 kilometers. The Obama administration since 2008, knew about Moscow’s actions in this direction, but to the Ukrainian crisis, it was limited to diplomatic pressure, without taking any concrete steps. Moreover, the Americans refused to missiles Tomahawk nuclear cruise missiles: now armed with only the missiles with conventional warheads.

Meanwhile, Russia had the opportunity to use a rocket complex “Calibre” on ships and onshore installations. They almost certainly can be equipped with nuclear warheads that even in 2015, confirmed President Vladimir Putin. To intercept cruise missiles need to have appropriate systems to detect and destroy low-flying targets. Useful in this regard may be the aircraft with the aviation complex of radio-location and guidance, that is the tactical aircraft of NATO. On the other hand, most of the countries-members of the Alliance cannot protect its military bases with the help of ground-based air defense (for example, in Germany such units were disbanded, not replace them appeared). The interception of cruise missiles will have to do in the first place fighter aircraft.

The possibility that the enemy will use cruise missiles, land-based missiles with such a large radius will force the allies to disperse their forces (ground anti-aircraft battery, aircraft with the AWACS, fighter aircraft). This will be especially dangerous if the Eastern flank of NATO is attacked and he is already at the beginning of the conflict need support.

With the help of cruise missiles, Moscow may try to hold the NATO forces reinforcements already on the territory of Germany. Moreover, it will be able to intimidate the leadership and population of NATO countries, to force them to restrict their participation in common defense (e.g., by using attacks on targets in the cities of Western Europe that seemed previously reserved).

It should also be noted that NATO countries have taken concrete steps aimed at strengthening the security of the countries of East-Central Europe, introducing, in particular, battalion group, as well as increasing the intensity of the exercises, which worked through the collective defence and the movement of troops. This puts into question the success of a hypothetical aggressive actions of Moscow, limited scope, for example, the hybrid character.

If in such a situation, a potential aggressor will be able to capture a particular territory, after some time, he will have to face numerous and fairly well equipped by NATO forces, which will begin to concentrate in Western Europe. After the attack on East-Central Europe to avoid a collision with the US military, the UK, Germany and Canada will be given the location of the battalion groups and carried out exercises on the transfer of power, immediate response, it is very difficult (if not impossible).

Cruise missiles, however, will allow Russia to go to the escalation of the situation. It can, for example, to deliver surgical strikes on military targets in Western Europe, as well as, quite possibly, to objects in our part of the continent. When the enemy uses only one system of weapons, his attack reflect is much easier than when it applies different means (aircraft, ballistic and cruise missiles). This all should be added that the Russian military doctrine envisages the possibility of using nuclear weapons.

NATO should engage in active preparation for the situation in which Russia will use their “new” weapons. First of all, it is necessary to strengthen detection and command in the air force and ground air defense in East-Central Europe and in the West of the continent. In this case, the gain should meet the increased threats. Of key importance here is the time factor: to postpone the introduction of air defense systems to our advantage.

It is equally important to include in the action plans in emergency situations ability to use your own offensive capabilities for retaliation. United States despite the reduction of arsenals have a great set of conventional arms for the application of punches (e.g., missiles JASSM-ER) that can be used not only tactical aircraft, but also strategic bombers or ships.

In the longer term it would be desirable to intensify the work on new generations of detection systems (e.g., blimps JLENS) and the defeat of air targets. Perhaps at some stage it can play a system of high-energy weapons.

In the development of offensive capabilities, NATO should take into account different scenarios, to be able to abandon the weapons that forcing Russia to make concessions (to return to compliance with the Contract). This approach (implementation of systems for Pershing and Gryphon, and at the same time negotiating with the Russians) led to the signing, in 1987, a turning point at that time, the Treaty on the elimination of intermediate-range and reduce the level of threat. Meanwhile, unilateral disarmament, which until recently was engaged in the Obama administration and the Western countries, only increased the odds of Russia.

Dealing with a potential “missile” aggression from Moscow will be effective only if the people have the power (especially politicians) have the will and determination, showing that they are able to take quick and strong action, which must include including a significant increase in spending on missile defense in the short and long term. Otherwise, the Eastern flank of NATO (despite the fact that it strengthened the allied forces) can be at any moment cut off from support, and it will put into question the reliability of the containment system, which are based on decisions of the Alliance summit in Warsaw.