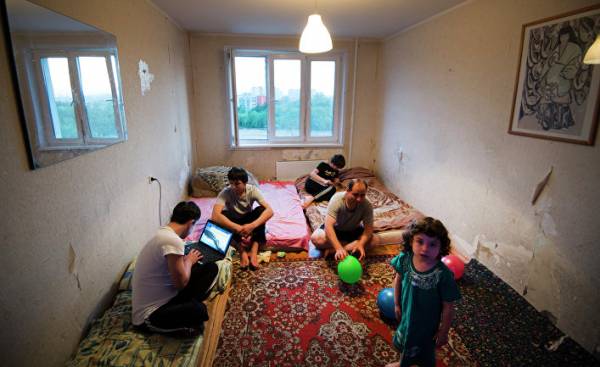 In bitterly cold February day, hundreds of workers from Uzbekistan going in circles in the snow and dirt at the construction site, located 16 kilometers from Moscow. Around them are several unfinished 18-storey residential houses, apartments in which are intended for officers of the Russian army.

The work was halted because the builders did not receive their salaries for several weeks. They have nowhere to go, so they’re just standing there, Smoking and talking to each other, and it all happens on the large construction site of the project “Plane”, which received this name due to the nearby monument to the pilots of the Second world war. The night they spend in the village for the builders, where there is made of corrugated steel cabins. There is no shower, no washbasin, no toilet, instead the outside is supplied in a number of mobile toilets, each of which is half filled with stalagmites of frozen excrement. In the morning, men warm themselves at the stove, prepare yourself carrot mush, and melt are taken from the Creek ice to get water for drinking. Most of them are poorly dressed for the temperature of minus 10 degrees — one working on his feet just wool socks and Slippers.

Construction site, employing immigrants who are not particularly new in countries with developing economies, and Russia is no exception here. According to the UN, in Russia there are 11 million foreigners, many do not have visas, and the majority of them came from predominantly Muslim countries of Central Asia. The European refugee crisis is contributing to global revival of isolationism and xenophobia in Russia — the country is the third largest destination for international migrants cope with the situation some other means.

A recent editorial in “Nezavisimaya Gazeta” was entitled “the tramp and Le Pen in Russia would be the opposition.” According to this newspaper, under President Vladimir Putin to be hostile to immigrants is tantamount to be configured against the establishment. “Domestic TV criticizes Europe for multiculturalism, refugees from the Middle East and Africa, tolerance toward immigrants,” reads the front-page. However, Russia’s attempts to capitalize on the negative attitude towards immigrants “can be described by the authorities as unacceptable nationalism.”

The reality in Russia is that of the immigrant economy is an important part of economic recovery after a long recession. And the country’s leadership understands this.

“Russia is facing a huge labor shortage, says Andrei Movchan, Director of the Economic policy program of the Carnegie Moscow Center. — We need cheap labor, but find it within the country impossible.” Immigrants are engaged in cleaning the city, a huge residential buildings that form the skyline. They play a key role in the industrial sector, in retail trade and in the services sector. As for the restaurant business, kitchens for the past many years are immigrants from countries such as Kyrgyzstan, Tajikistan and Georgia, and they are all a big part of the money transferred home.

“If you remove all the immigrants, constituting 15% of the workforce in Russia, to replace them there is nobody,” says Movchan. He also warns that to attract Russian workers will require higher wages, this will lead to higher prices and slow economic recovery.

Following a sharp drop in oil prices and after the introduction of Western sanctions caused by Russia’s aggression in 2014 against Ukraine, followed by a reduction in the inflow of immigrants. The number of Uzbeks decreased by 21%, while the number of the Tajiks has decreased by 11%, Kyrgyz — 5%. But then the flow of immigrants increased again. In 2015 in Russia came and stayed here to work 161 thousand foreigners. In 2016, the number had increased to 196 thousand. Such data are cited by the Russian foreign trade Academy and Institute of economic policy named after E. T. Gaidar. The amount acquired work permits grew last year by 10%. The majority of immigrants comes from former Soviet republics as Tajikistan and Kyrgyzstan, and migration have been beneficial to all parties involved. According to the world Bank, these two countries occupy the first place among the economies that depend on remittances.

The restrictive policies of immigration in Europe and in America due to existing concerns about the possible loss of sources of income of the local population, as well as fear about terrorism. Russia has the same concerns, but they are not expressed as loudly. Putin last month said that about 5 thousand people from the former Soviet Union joined the militants of the “Islamic state” (banned in Russia organization — approx. ed.), and in 2016, the law enforcement officers arrested at least two groups of immigrants suspected of preparing terrorist acts on Russian territory. However, the government in February announced that 200 thousand formerly deported Tajiks will be allowed to return to Russia.

Putin is cautious when it comes to addressing the problem of Islamic extremism. It is estimated that Russia is home to 9.4 million Muslims, who make up 6.5% of the population. In addition, Islam was one of the four traditional Russian religions. However, according to Movchan, the populist anti-immigration sentiments widespread, and the police regularly conduct raids on the factories. However, economic considerations always outweigh it. “The authorities will hold ostentatious of deportation and to make populist laws, he says. — However, the situation will not change”.

Immigrants working in places like “Airplane”, talk about the daily struggle for survival, but also about low wages, harassment and discrimination.

“Moscow was my dream, a beautiful city where a lot of money — thirty-one Fakhreddin says Yakubov. But today I want to leave.”

64-year-old Murad Yermolaev configured as bleak. He has five children, and he came to Russia because he was promised a job in the city of Khimki. Two months all was well, but then he was fired. He changed a few jobs and finally ended up on the “Airplane”, where he began his real adversity.

Within a few weeks he was paid a salary. But then the payments stop. For six months he continued to work for 10 hours a day, six days a week, but, according to him, he only paid a third of what was promised. He hoped to send the money earned in Uzbekistan, in Samarkand, but now he can’t even save enough money to pay your way back home.

One after the other workers on the “Aircraft” tell the same story. “They wanted to deceive us, says the 26-year-old Ruslan Kalbergenov who came from the Uzbek region of Karakalpakstan. Like many others, Kalbergenov says that he promised on the legal construction documents for the right to stay in the country, but these papers he had not yet seen.

Workers are outraged, but when they come face to face with him by Gazimagomedova (he introduced himself as a shareholder of the construction company that owns this building), they fall silent. The Gazimagomedova, they have no written contracts, and therefore it is not responsible for debts accumulated by the previous owner.

“I owe you anything?” he asks in a loud voice. Working quietly answer: “No.”

Gazimagomedov said that the company has fully paid the workers that have written contracts. But the current leadership is not responsible for those people who have had an informal arrangement with the previous owner. According to Hamroyev Fringe, human rights activist from Uzbekistan who came from Central Asia, poor knowledge of the Russian language and do not have the appropriate education, often become victims of fraud.

Russia is in need of immigrants as a labour force, but there is an obstacle in the form of bureaucracy. In 2010 we introduced a permit to work, and this was done in response to a sharp increase in the number of immigrants. Today for obtaining a permit for a period of one month is also required to pass a test on knowledge of the language, and it is $ 70 (over 4 thousand), and it is a significant sum for workers who, on average, earn 400 dollars a month. According to the Russian government, in 2015, was issued about 1.73 million work permits.

However, not everyone needs to obtain a work permit. Workers from Kyrgyzstan, Kazakhstan and Armenia are exempt from this procedure as these countries become members of the Customs Union created by Russia in 2010.

As Deputy head of the State Duma Committee on nationalities of the Communist Valery Rashkin deals with issues of immigration law. According to him, “Russia is flooded with immigrants with low qualifications”, and they take away jobs from Russian citizens. (Unemployment in Russia does not exceed 5.6 percent). He is a supporter of introducing a visa regime for citizens of Central Asia and takes a much tougher stance than the Kremlin.

Ildar Gilmutdinov of the ruling Putin’s party “United Russia” does not agree that soft immigration can lead to increased terrorist threat. “The current visa regime and rules of entry provides a sufficiently high level of security, say Gilmutdinov, head of the State Duma Committee on nationalities. Visa-free regime with post-Soviet States “is the strategic choice of Russia”.

According to the Levada Center, before the war in Ukraine, about half of Russians advocated the restriction of the flow of immigrants from the Caucasus and Central Asia. Today 66% of Russian citizens support the introduction of more stringent immigration control. Putin’s opponents took advantage of this discrepancy between the government’s position and the views of the people in the first place Alexei Navalny is a politician who has made the introduction of visas a major part of its platform.

In the inverted world of Russian politics are the liberals with a nationalistic tendency as the Bulk and also the extreme nationalist wing campaign against Putin. Initially, the nationalists joined the protest actions against the government in 2012, and many of them sided with Ukraine on the eve of the invasion. Then followed by punitive measures — arrest and prosecution. Alexander Verkhovsky from the Sova center, a leading monitoring of manifestations of racism in Russia, said that many ultra-nationalists went to the Ukraine, and some of them fought against the Russian soldiers and Pro-Russian Ukrainians in the East of the country. “The authorities fear that more violent nationalists can be an important physical force for possible radical protests,” — said Verkhovsky.

None of this means that immigrants who are in the middle, protected by the state, and their working conditions become more humane. In the construction resumed, although the number of workers decreased, Bakhrom Hamroev, a human rights activist, says that some builders from among protesting against unpaid wages, were asked to leave the construction site.