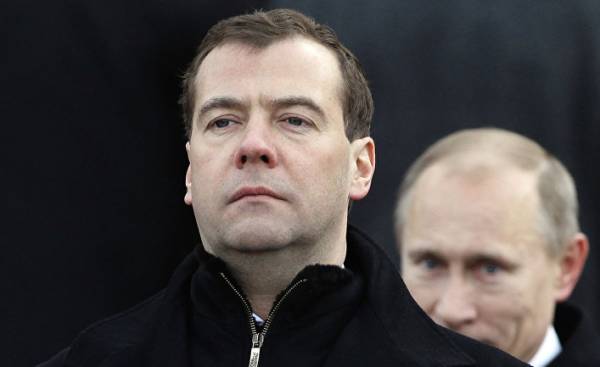 Shoes that Dmitry Medvedev ordered with your account on Gmail, is one of the few traces which connect it with the “charity funds”, which owns luxury real estate, where the head of government enjoys life.

None of these places directly Medvedev does not belong to this property, very close to the Premier.

The author of the video is the opposition leader Alexei Navalny and his anti-corruption Fund of the FCO, which conducted an extensive investigation of relations of Medvedev.

Medvedev’s circle and the billions in funds

Luxury property in the possession Medvedev, belongs to charity, which was very inventive name “the Gift”, “the Foundation of socially important state projects” and “Fund for preserving cultural and historical heritage”.

Funds received more than 10 billion crowns in the form of gifts from the richest of the Russian oligarchs, as well as cheap loans from Russian state banks.

“The only recipients of this charity were Medvedev and his relatives,” — said Navalny in the video.

The trust funds are managed by a childhood friend of Medvedev and his former business partner, while his wife Natalia Medvedeva (SIC — approx. ed.) and a nephew are members of the Board.

Medvedev himself is not the owner, and officially a property of his have nothing in common.

But from his pictures in Instagram indicate that the Prime Minister regularly there resting.

“Crossbody trace” showed that by ordering from his private account to Gmai naykovskie sneakers and shirts, Medvedev asked to deliver them to the address of one of the “charity” funds.

One of the luxury estates in the countryside, which was built by charitable foundations, is an abandoned village in Kursk, where the Medvedev family.

The estate has a giant landing pad for the helicopter of Prime Minister, and also a house for security, a swimming pool and a large specially created Park and lake.

There is also erected the chapel in memory of his father head of government.

Palaces, incidentally, protected by the security services. The approach and entrance to many residences is prohibited.

The list includes the most expensive and elegant houses-palaces in Sochi, where Medvedev is holding a vacation for several years.

In addition to the “garden” with an area of 1.5 thousand square meters, the complex has swimming pools — outdoor and indoor — and posadochka helipad.

In Moscow charity Fund childhood friend who built a Villa with an area of 3 thousand square meters. The Villa has a large swimming pool in ancient Roman style, own lake with fish and a large sports complex.

The territory of 20 hectares in the most expensive residential area was a gift from the oligarch Alisher Usmanov.

In the list of properties controlled by the funds, there is also a huge vineyard on the Black sea, and a small Palace by the sea.

Using a Cyprus company friends Medvedev also owned two yachts, which are often moored at the Prime Minister’s “giving” on the Volga. In September, activists in the fight against corruption has published pictures of this incredible place, which completely destroys all notions of what a Russian dacha, since, in particular, there is a separate ski slope.

The environment Medvedev also belongs to this Palace in St. Petersburg. He renovated and converted into a large, extremely exclusive apartments.

The larger apartments in the Saint Petersburg Palace, for example, have its own elevators for luxury cars.

A fighter against corruption Navalny was also able to learn that the funds acquired a vineyard in Tuscany in Italy a few months after this place was visited by the wife of Medvedev.

The vineyard is owned by the same Cyprus registered company, which owns and yachts that are in use by Medvedev.

The whole office is in the foam

The video was released on Thursday last week.

From that moment large Russian TV channels controlled by the Kremlin, the media were not told about the case of a word, although videos have garnered 8.3 million views.

When the opposition politician and his staff came to their offices in Nizhny Novgorod on Monday morning, they found that the entrance and stairs are filled with foam.

Outside were protesters with placards.

“Bulk, why did you betray Russia?” — shouted the demonstrators and urged him to get out of Siberia.

“You’re right” — ironically answered the Bulk of the demonstrators.

“Perhaps I should go there and open offices for the election campaign. There also live people who are against corruption,” he said.

On the one hand, this investigation has been described as the best of all held the Bulk, and the most ambitious. On the other hand, many independent Russian commentators indicate that Bulk in its conclusions went too far.

The Russian Transparency International believes that the materials do not prove that Medvedev himself is corrupt.

“This is not proof, even if there are some friendly relations”, — said in an interview to “echo of Moscow” Deputy head of the organization Ilya Shumanov, who believes that the case deserves criticism, first of all, from an ethical point of view.

Bloomberg indicates that the network funds, which exposes the Bulk, means that Medvedev’s entourage in the event of a change of power could lose everything.

“This gives them a great reason to stay in power as long as possible,” writes Bloomberg.

“Fundamentally new — something that the allegations against the Prime Minister and party leader. We can expect more,” — said “Moskovsky Komsomolets”. He asks the question: what is the matter? Whether Medvedev will lose his job, whether Navalny behind bars.

Another sign of the power struggle in the Kremlin?

Another possible version is that the allegations of corruption are also part of the struggle for power inside the Kremlin.

Since autumn, rumors about the POI that Medvedev may on the way to departure and can be replaced, for example, the powerful boss of Rosneft Igor Sechin and the Minister of defence Sergei Shoigu.

“In Russia corruption is the norm. Many people think that the government has the right to be corrupt,” says Professor of MGIMO Valery Solovyev (SIC — approx. ed.) in conversation with Mk.ru. He doesn’t think the prosecution has made the majority of Russians some kind of impression.

In Russia, the presidential election is coming

Navalny said he will participate in the elections, but there are no guarantees that the Kremlin will allow.

In 2011, one of the three asked the Russians replied that he would vote for Navalny as the next President. In February of this year, according to the Levada center, the number dropped to 10%.

During this time, the Bulk has been extensively libellous campaign and was on probation.