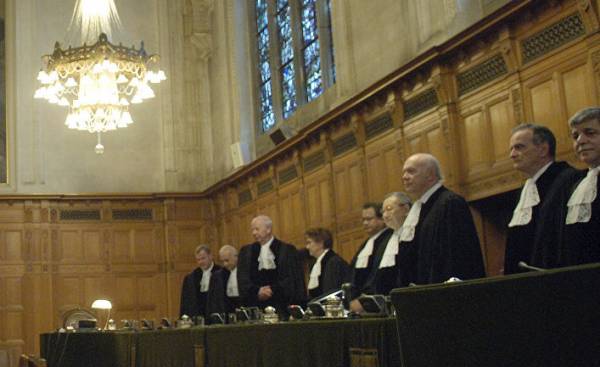 In the International court of justice ended the second day of the case “against Ukraine”, in which primarily considered the request of Kiev on the introduction of interim measures to Russia, which should protect the rights of Ukrainian citizens in ordinary life. The request was seen as an urgent issue.

On Tuesday his position was represented by the Russian side, which, as expected, rejected all accusations from Kyiv. “Russia fully complies with its obligations under both conventions (the Convention on the suppression of the financing of terrorism and the Convention on the elimination of all forms of racial discrimination — approx. ed.). We do not see neither the legislative nor the factual basis for these (provisional measures) measures,” — said the head of the delegation of the Russian Federation Roman Kolodkin.

In the speeches of the representatives of the Russian Federation was made known rhetoric of “revolution”, “extremists”, “insurgents” and other inherent in the foreign policy of the Russian Federation against Ukraine in 2014 rhetoric. Moscow has rejected accusations of financing terrorism in Eastern Ukraine, and the presence of weapons from the militants explained that they took it from the weapons storage of the former Soviet army which was located in the mines, and also at the expense of arms of the Ukrainian army.

Another Russian representative, Ilya Rogachev called anti-terrorist operation “conflict unleashed by the Ukrainian government, its Armed forces and irregular battalions against people in Eastern Ukraine, self-organized in “LNR” and “DNR”, which sought protection from those who seized power during a coup.”

Another representative of the Russian Federation Samuel Wordsworth (Samuel Wordsworth) said that the only one who can be described as a terrorist in this situation is Ukraine.

Referring to the allegations of discrimination against Tatars in Crimea, the representative of the Russian foreign Ministry Grigory Lukyanets said that it is Ukraine, not Russia, for decades discriminated against the Tatars on the Peninsula. “Russia is making significant efforts to support Crimean Tatars and the Ukrainian community and promote their culture in Crimea, despite the difficult financial situation. Such efforts have never been implemented on this territory,” he said.

Another representative of the Russian Federation Mathias Forto stated that after 2014 (the year of the illegal annexation of Crimea by Russia), the number of schools in which students can receive education in their language increased, rather than decreased, as the number of media. “The overall situation has improved,” he argued.

March 6 in the Hague in the framework of a claim of Ukraine against the Russian Federation in the international court of justice began hearings on the application of preventive measures. It is expected that hearings on the application of interim measures will last for four days. Ukraine presented arguments on Monday, March 6, and will continue on Wednesday, March 8. The Russian Federation presented its arguments today and will continue on Thursday, March 9.

Hearings start every day at 10.00 (11.00 on Kyiv time). This lawsuit was filed on January 16, 2017 in the international court of justice with the aim to attract the Russian Federation responsible for support of terrorism in Eastern Ukraine, and discrimination against ethnic Ukrainians and Crimean Tatars in the occupied Crimea.