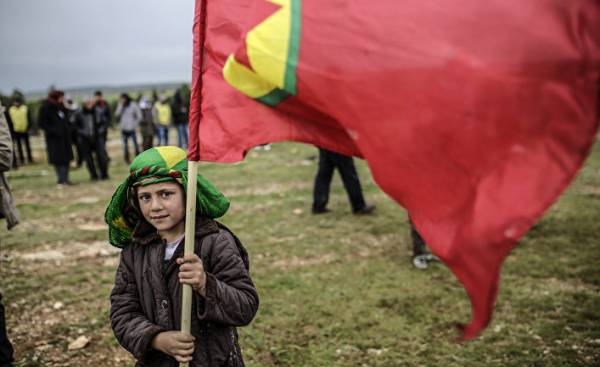 The third March, the Russian army announced that Kurdish fighters from people’s protection units began to take their positions in the city of Manbij in Northern Syria in favor of the regime forces of President Bashar al-Assad.

Sergey rudskoy, head of the operations Directorate of the General staff of the Armed Forces of the Russian Federation confirmed that, since the third of March, the city of Manbij and its surroundings came under the control of the forces of the Syrian regime. This fact means that now these areas are under the protection of Russian troops deployed in Syria.

This statement was made the next day after the Minister of foreign Affairs of Turkey Mevlut Cavusoglu warned that if the people’s protection units leave Manbij, the Turkish troops, which also supported the Free Syrian army in the liberation of the city of al-Bab, starts to move in the direction Manuja order to strike at the forces of the Kurds.

A message for America

According to the journalist Murat Adina from the Turkish newspaper Hurriyet Daily News, message Mevlut Cavusoglu addressed to America, has chosen the people’s protection units to its partner in the fight against ISIS (banned terrorist organizations — approx. ed.) in these areas. Turkish President Recep Tayyip Erdogan has been notified and former President Barack Obama, and current President Donald trump that he is ready to act jointly with the Americans against ISIS, but only under the condition that Washington will abandon the Kurds as its ally.

But a response to the fears of the Turks did not come from the United States, and Russia. Atkin believes that the progress of Russia in the current situation has allowed to reveal some tendencies in the ongoing six years the Syrian conflict.

1. Russia surpassed Turkey and the United States in Syria. Moscow has demonstrated its influence on a people’s protection units, who collaborated with US in 2014 This can be considered one of the outcomes of the Kurdish conference held in Moscow on February 15.

2. Requests Turkey sometimes performed in an unexpected way. In Russia confirm that the people’s protection units really left Manbij. Thus, Russia at the same time have done something for Turkey and the Syrian regime. This is what could not reach Washington, as an ally of Ankara in NATO. However, the request of Turkey on the transition of the city under the control of the Free Syrian army is unlikely to be satisfied.

3. It is unlikely that Turkey will issue a warning the forces of the Syrian regime or to take any action against him. First, the presence of Turkish troops in Syria, justified by the fight against ISIS was made possible thanks to a kind of transaction. Secondly, the Turkish government will not take the risk of provoking another crisis in relations with Russia — especially given the effort that it took to re-establish relations between Moscow and Ankara after in November 2015 Turkey shot down a Russian fighter.

4. Since joining the game in mid-2015, before starting to send additional troops to Syria and to strengthen the naval base in Tartus, as well as the airbase in Hamim, Russia strengthened its leadership role in Syria. But still there is no evidence that the next move Russia will not carry out in coordination with the Americans by secret diplomacy. Vladimir Putin understands that trump will take into account the Russian factor in Syria before changing its strategy.

5. This step may become a new nightmare for the Turkish government. Putin, Erdogan to understand that if he will maintain a tough stance against Assad, he (Putin) is not difficult to convince the Syrian leader to give control of units of the Kurdistan workers ‘ party and people’s protection units a large area on the Turkish border. And once again, Russia looks stronger than the United States, using its influence on the Kurds in the Turkish-Syrian political issues.

Atkin concludes that Ankara will have to recognize the superiority of Russia over Turkey and the United States that continue to contradict each other, and also to review its policy in accordance with these data before you do the next step.