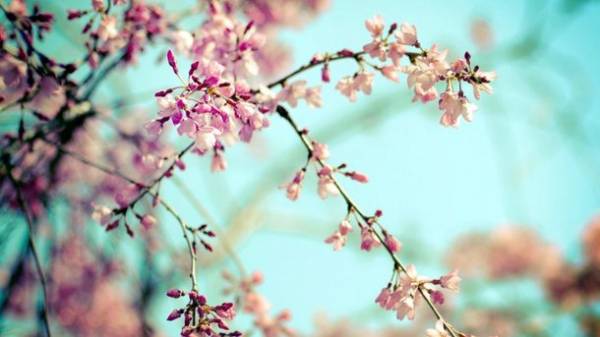 In Ukraine it’s spring and warming temperatures rose to 15 degrees in the afternoon. This week, weather forecasters predict Ukrhidroenerho, expected a slight cold and heavy rain. The website “Today” found out what weather to wait for the Ukrainians this week. The forecast for March 7. Photo: Ukrhidroenerho

On international women’s day expected a slight cold in the West of the country the thermometer column will fall to 9 degrees above zero during the day. For the rest of the country will be partly cloudy weather, the temperature will range from 11 to 14 degrees above zero. Herself warm weather that day, according to the forecast of weather forecasters, will be in Kirovohrad and Mykolaiv regions the temperature will rise to the level of 13-15 degrees. 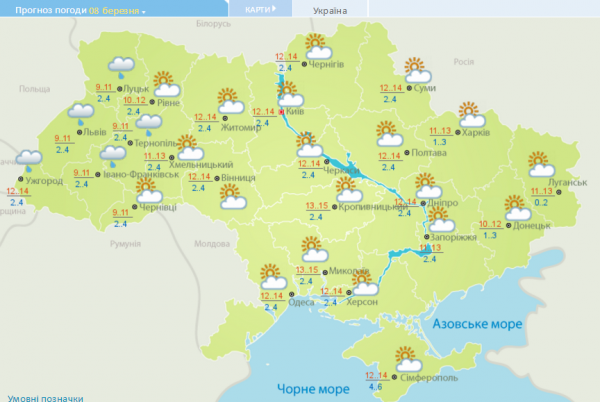 The ninth of March the weather in Ukraine will not change – the rains will be held in Ivano-Frankivsk, Volyn, Lviv and Transcarpathian regions, the rest of the – partly cloudy. The temperature here will fluctuate in the range of 9-11 degrees. In the center, on the North and South, the air warms up to 12-14 degrees, at the same time, the air temperature in the East this day will vary between 10-12 degrees above zero. 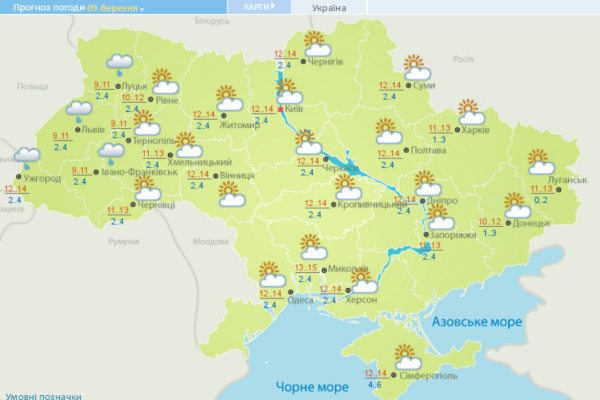 On Friday, March 10, in Ukraine is expected a sharp change in the weather. In the West, cold to eight degrees above zero, the same weather is expected in Central and North. In the East and South of the country the temperature will vary from 9 to 13 degrees Celsius.

Relatively cold weather is expected in Odessa region – the thermometer column will fluctuate between the marks 6-8 degrees above zero. Heavy rains in the center South as well as in Chernihiv and Sumy regions, in the rest of partly cloudy weather is expected. On 11 March, the air temperature in Ukraine will not change. Heavy rains forecast in Odesa, Poltava, Rivne and Volyn regions, the rest of the – partly cloudy.

The seventh of March is celebrated day of memory of venerable Moses of white lake, Mauritius, informs a portal “Weatherman”. In Mauritius we have the earliest arrival of the rooks, starlings arrive first, and it promises an early spring. On this day you can hear the earliest warble of the Skylark. In the old days noticed that cool the seventh day of March indicates that the summer is likely to be rainy. Eighth of March is revered the memory of St. Polycarp Bryansk. From the eighth to 15th March not ruled out the return of cold weather: “the month of March likes to play tricks: frost proud nose sits”. Winter gives way to spring.

On Friday, venerated the memory of Saint Tarasius, Archbishop of Constantinople. The weather that day predicted bird: chickadee sang – heat tells fortunes. From that day the transition occurs in the average temperature of air through the mark of zero degrees. This is considered the time of occurrence of thawed patches. Buds swell — spring smell. From that day to plant the seeds for seedlings of cabbage and tomatoes.

March 11 marks the day of memory of Saint Porphyrios, Bishop of Rysskogo. In former times the weather that day was determined by the wind: if the wind blows from the South or southwest, you should expect a quick warming.