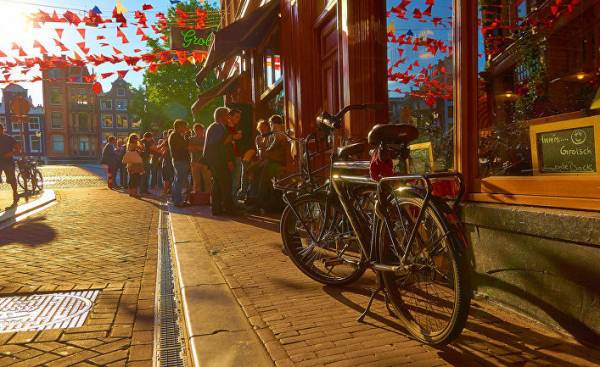 Shortly after in 2005, Ksandra the Lammers (Xandra Lammers) moved into their new home on the Eastern outskirts of Amsterdam, she began writing a blog devoted to the district where she settled. Iburg is a very interesting place, a kind of architectural wonder, built in the middle of the lake on an artificial island. She still has a blog, but the surprise and curiosity gave way to frustration and annoyance. By living in the neighborhood of Muslim immigrants.

“First I voted for the labour party — said to me the Lammers. — I adhered to the norms of political correctness. But things have changed.” Now she is a strong supporter of Geert Wilders (Geert Wilders) and his anti-immigrant and anti-Islam freedom Party, which has demonstrated very high results in the elections in March 2015. It is also one of the characters in the book nationalist writer Joost niemöller (Joost Niemoeller) called “Angry” (“Anger”), which was released in February and has already become a bestseller. The anger that fuels the campaign Wilders is very acute in the Netherlands, however, as the anger of Americans who voted for Donald trump — it is caused by the existence of parallel realities in the society in which attempts to carry out social and cultural integration ran into serious obstacles.

The reality in which he lives Lammers, quite severe. Lamers — owner of translation Bureau and a native inhabitant of Amsterdam who had to leave the city center because of the sharp rise in property prices. When she and her husband bought a house in Eburge, real estate agent, she said, told her that this area will become an arena for a “social experiment” — the attempt of the city authorities to unite the owners of the houses from the middle class and tenants of municipal apartments in a modern urban area. First IJburg is very reminiscent of the village: the people with the same income bought a house there, to be able to stay in Amsterdam, they quickly became acquainted with each other. And then in the area began to settle immigrants who had moved there from the suburbs, where the demolition of their cheap housing. As a result, 30% of housing in Eburge was in the hands of tenants of municipal housing.

“We have to share with them somewhere in the yard where the elevators, says Lammers. — And people began to face unpleasant things, scratched cars, puddles of urine in the elevators. Now on my street there is a mosque where radicals go”. (The site of this mosque, which was closed after complaints from local residents, referred to the speech of the radical preacher and the “Muslim brotherhood”, which in some countries is considered a terrorist organization.)

Some of the neighbors Lammers soon discovered that she writes on her blog, and, according to her, meeting her in the street, Moroccan teenagers began to shout insults in its address. According to the city authorities of Amsterdam, Eburge recorded one of the highest levels of youth crime in the city. Immigrants living in Eburge demonstrate one of the lowest levels of integration among the districts of Amsterdam.

Martin niemöller, who presented the first copy of his book, the Wilders, says that the anger of which he writes in it, associated with feelings of displacement. In Amsterdam representatives of the middle class can no longer afford to live in the city centre due to reconstruction and the growing flow of tourists, while the cheaper areas, where they moved, were rapidly filled with families from Turkey, Morocco, Suriname and the Netherlands Antilles. “The atmosphere on the streets changing, people no longer feel at home there, says Martin niemöller. But they have nowhere else to go.” According to Lammers, she can’t afford to leave their home and remain living in Amsterdam, where her small company.

Wilders became the leader of the anti-immigrant party partly due to the fact that he personally observed the similar changes in your own area. In 1980-ies and 1990-ies he lived in Kanaleneiland, the district of Utrecht, which is just two decades turned from the almost white area in an international first, and then to a predominantly Muslim district. In his speech, Wilders said that it is not again attacked and he was forced to flee. As a longtime fan of the Israeli far-right wing, he blamed all change the nature of Islam. From his point of view and from the point of view of its supporters, the mosque is “palaces of hatred” and the robbers originally from North Africa is “street terrorists.”

Although supporters of Wilders ‘ claim that immigrants often rule the streets, the immigrants themselves have a different opinion. Murat, the mechanic, moved to Holland from Turkey 30 years ago, now lives in the city Almere, which in the 1980-ies built from scratch East of Amsterdam. Almere is a cosmopolitan city, and 30% of its population is immigrants, but the main party in the city Council became the party of Wilders.

“If I tried to write a book about all those cases when the police stopped me on the street for no reason — just because I have dark hair — or when my car stopped in the absence of any wrongdoing on my part, this book would be this thick, — said Murat, spreading his palms on the width of the foot of an adult. — If I managed to save enough money, I would go back to Turkey, and burn it all blue flame”. According to Murata, its Turkish name of keeping him from getting a better paying job, and his words are confirmed by statistics: last year, Dutch policy center sent out to different companies exactly the same summary, signed by different names, and found that native Dutch people get invitations for interviews twice as often as immigrants from Morocco.

There is a third point of view — the point of view of the “left elite”, which Wilders likes to criticize. Rob Wijnberg (Rob Wijnberg), the founder of De Correspondent, which publishes the results of investigative journalism, wrote a column addressed to the voters of Wilders to find common language with them. When I asked him about Muslims in his district — and, according to him, there are many of them — he shrugged. “It’s just my neighbors,” he said.

From this point of view also has its reasons. The Netherlands is a very safe country. The level of rape in the Netherlands is three times lower than in the United States, and the murder rate is five times lower. By European standards, Amsterdam is also a safe city. I walked in Emerge late in the evening and saw no gangs of Moroccan teenagers wandering the street. The streets are clean and mostly deserted. In Utrecht I took a walk Kanaleneiland. Children playing in school Playground, it was dark, and the Turkish mosque near the shopping center had no minaret. I felt quite comfortable and safe.

The problem is how to combine all the opposite — and partly justified — the point of view. This problem is particularly acute in the Netherlands, in history where representatives of different faiths and origins are never mixed with each other. Marriages between Catholics and Protestants were condemned, however, the predominant approach remains the approach of “live and let live” is “liberalism, reaching to apathy,” says, Wynberg.

Partly because of this traditional Outlook, when in the 1950-ies of immigrants arrived in the Netherlands as guest workers to rebuild the country after the Second world war and give impetus to the development of the industry, they simply formed a separate stratum of society. The Dutch quite easily resigned to their presence, because the government promised to send them back as soon as they finish their work. Of course, this did not happen — as, however, and their integration.

“In the Netherlands segregated society, explained, Wynberg. — It’s not just about whites and blacks, it is also about the separation of those who have received higher education and those who don’t. As there are no such churches, schools, and even bars where you could walk the representatives of different layers, the only place where we can face each other is probably the football match”.

As in the US, supporters of Wilders and their opponents from the left wing read different Newspapers and watch different TV channels. The idea of integration implies not so much the merger of the two parties as forcing one side to accept the worldview of another.

Supporters of Wilders want to force the immigrants to adopt the culture of the country in which they live — which in the case of the Netherlands includes same-sex marriages available to all abortion and euthanasia — otherwise they should leave the country. Immigrants continue to be silent, but they close the bars on the corner and replace the traditional butchers shops Halal. Supporters of the left wing want the supporters of Wilders abruptly softened their xenophobic attitudes and more willingness to accept other cultures as they themselves do. “We are intolerant people who are intolerant to our tolerance,” wrote political historian Hubert Smits Hubert (Hubert Smeets).

Since we are talking about the Netherlands — the nation that has traditionally engaged in trade and was always proud of his ability to find consensus, this struggle will eventually end one way or another compromise. Although Wilders is unlikely to be able to rule after the March elections due to the fact that no major party will want to form a coalition with his party, Niemöller believes that its good results will change the national consensus. “We have seen almost mystical change, he says. — Our elite switched to liberal thinking 60 years in just one summer. In just one summer we went from rejection to acceptance of euthanasia — and no one was able to understand why it happened. Therefore, it is possible, eventually we will come to the conclusion that Islam is really a serious problem.”

The consensus is already beginning to change: in the past few years, the Netherlands has tightened its immigration policies, complicating family reunification, declaring illegal residence a criminal offence and introducing new restrictions for dual citizenship. If the number of supporters of Wilders in Parliament will grow, it will almost certainly lead to new limitations. The Lammers does not expect that Wilders will be able to close all the mosques, as he promises, but she hopes that he will fight crime in the immigrant that could happen, despite the powerful left-wing tradition in the Netherlands. So the pendulum has swung in the opposite direction, to the political forces of the left wing and the centrists will need to offer its own programme that can unite the citizens, but yet they fail to do so.