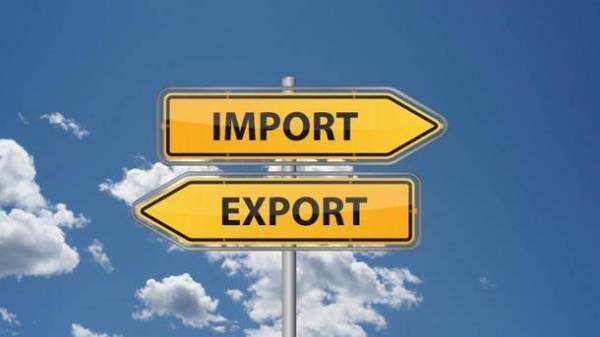 Ukrainian exports to Russia over the past few years has decreased several times. Before the outbreak of hostilities most of the goods from Ukraine to buy the country’s post-Soviet space. However, the military actions in the Donbas and the food embargo Russia introduced some changes: the Ukrainians had to look for new markets. Now the EU gets 37% of Ukrainian exports, however, Russia remains the main trading partner. The website “Today” to find out who sells the Ukraine, and why we were not able to conquer the EU market.

From 2013 year the volume of Ukrainian export decreased several times. According to state statistics, in 2013 the total amount of exports amounted to more than 63 billion dollars, a third of all goods bought of CIS countries. After the outbreak of hostilities in the Donbass export revenue is falling every year. By the end of 2016 it amounted to 36.3 billion dollars. 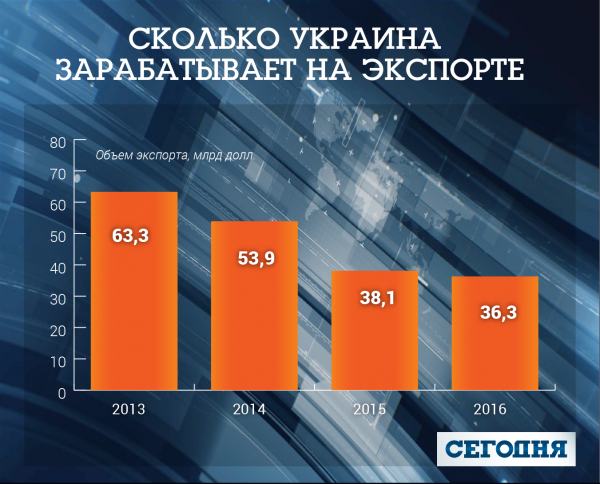 The main reason for the fall in exports – reduction of prices on commodity markets, military aggression and food embargo with Russia. The loss of the Russian market from Ukrainian producers have the opportunity to establish trade with the European Union. In 2015 Ukraine may sell their products to the EU without import duties, and in 2016, the same opportunity came and the Europeans on the Ukrainian market. The two countries signed a agreement on free trade Area (FTA)

Despite this, in the first year of the agreement exports to the EU fell from 17 to 13 billion dollars. And last year exports to European Union countries grew by only $ 500 million, while the total amount of export revenue
decreased by $ 1.8 billion. 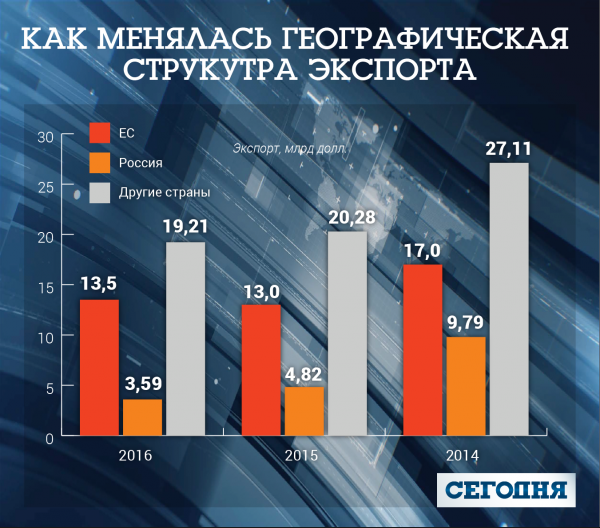 In the government office for European integration claim: the EU is the main trading partner of Ukraine. In total exports 28 EU countries is 37.1 percent, and Russia – less than 10%. If we consider export and import for individual countries, the Russian Federation, as before, takes the first place among main trade partners.

On the second place in terms of export – Poland, 2016 Ukraine sold to Western neighbour of goods for $ 2.2 billion, followed by Turkey, Egypt and India. If you factor in all trade between countries (exports and imports). Following Russia are China and Germany. 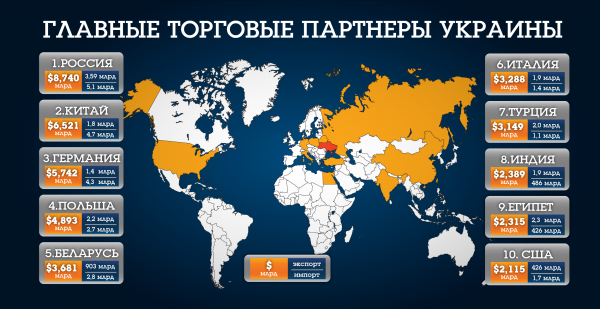 Why Ukrainians have not won a European market

The EU market gradually began to leave the new Ukrainian companies, including small and medium enterprises in the state government office on European integration. “Ukraine received permission to export to the EU most goods of plant origin, and in 2016 for us to open the market of dairy production”, – noted in the office.

It is easier to sell in the EU raw materials and food, experts say. Is the product, the quality of which meets European standards. At the same time, to export the machinery necessary to adapt the Ukrainian standards and to invest in the modernization of its production.

“The European market is very competitive. We haven’t completely overcome the technical issues, there are other technical regulations. They are not worse and not better they are just different. The first fruits can be seen in ten years. To compete in this market, we need to modernize our enterprises. We still in Soviet times, they need to invest,” – said the head of projects of the Association of exporters and importers Nikolai Larin.

“The European market is very competitive. We haven’t completely overcome the technical issues, there are other technical regulations. They are not worse and not better they are just different. The first fruits can be seen in ten years. To compete in this market, we need to modernize our enterprises. We still in Soviet times, they need to invest,” – said the head of projects of the Association of exporters and importers Nikolai Larin.

According to the state statistics, the most popular Ukrainian goods on foreign markets – agricultural products (42% of total exports), followed metals (23%). According to experts, one of the obstacles to free trade with the EU – quota Ukrainians are 36 kinds of products can sell only within quotas. 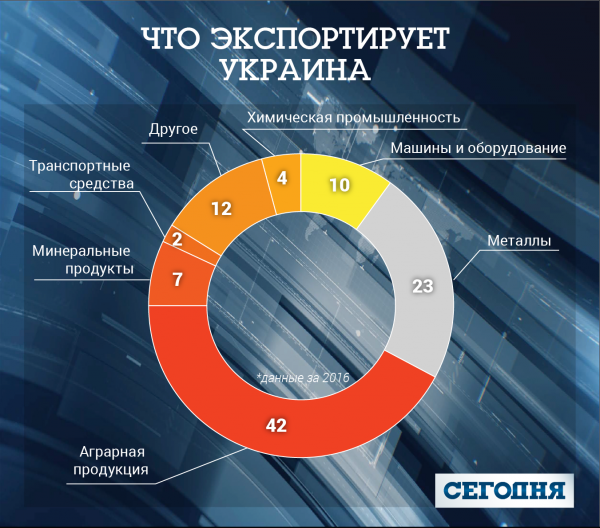 For example, 16 tons of poultry meat and five tons of honey can be sold duty-free if you export more – for the “extra” will have to pay the tax. This leads to the fact that the cost of goods has to increase, and it becomes uncompetitive in the market. As the Director for research, Center for economic research Institute of economic research and policy consulting Veronika Movchan, quotas are imposed on countries for sensitive products. Thus, the European Union “protects” their market. Ukraine also introduced a duty for Europeans:sugar, pork and poultry.

“Quotas are a major barrier for Ukrainian producers. For the first six months of 2016 we have completely exhausted half of the quota. Accordingly, Ukrainian producers are unable to fully realize its export potential in the EU market” – the analyst “Alpari” Maxim Parkhomenko.

“Quotas are a major barrier for Ukrainian producers. For the first six months of 2016 we have completely exhausted half of the quota. Accordingly, Ukrainian producers are unable to fully realize its export potential in the EU market” – the analyst “Alpari” Maxim Parkhomenko.

At the same time, Nikolai Larin notes: 36 Ukraine chooses only seven. The main reason for the relatively small volume of trade with the EU low competitiveness of Ukrainian producers.

“Take the honey – five thousand tons can enter any manufacturer. Who first imported the selected quota. But then no one denies this honey to import to the territory and to sell, but the fee for this med is not zero, and, for example, 17%. Clearly, this increases the cost of production. But nobody says that it can’t be exported, we Have about 36 of the positions of quota, of which only seven positions selected. Honey, wheat, poultry and other, and the rest – even the quota is not selected,” explains the expert in the field of international trade.

Most European quotas affect the agricultural sector, says the CEO of “Ukrainian club of agrarian business” (UCAB) Taras Vysotsky. “The EU market under the quota in 2014-m to year unilaterally opened for Ukraine. Farmers in fact use these capabilities for almost two years. Of course, I wish the quota was more, but in General in most areas of the quotas, especially in agriculture, are filled and, accordingly, farmers have the opportunity to save,” – said the expert of agrarian business.

Expectations were not met

After the signing of the FTA with the EU part of the Ukrainian experts stated that Ukrainian market would be flooded by cheap imports, and domestic producers will have to improve the quality of their goods. However, the expectations did not materialize.

The main reason is the sharp devaluation of the hryvnia. If certain imported goods fell, the Ukrainians from-for sharp growth of dollar exchange rate decrease is not felt. Yes, and a significant increase in the quality of Ukrainian goods, which is predicted by experts, also yet to come.

“In the long term the quality of our goods will increase, primarily due to competition in the domestic market and the desire of our manufacturers to develop external,” – said the expert Alpari.

Nikolai Larin is also sure: the quality of Ukrainian market will change for the better, but it will take 10-12 years. “Our economy is now moved to the “rails” of the market for which we work. We transform their laws and years 10-12 all the rules that apply in the European Union, will act in the national market. This suggests that the quality of products and competition increase on the domestic market. This will benefit all of us, the consumers,” – said the expert in the field of international trade.