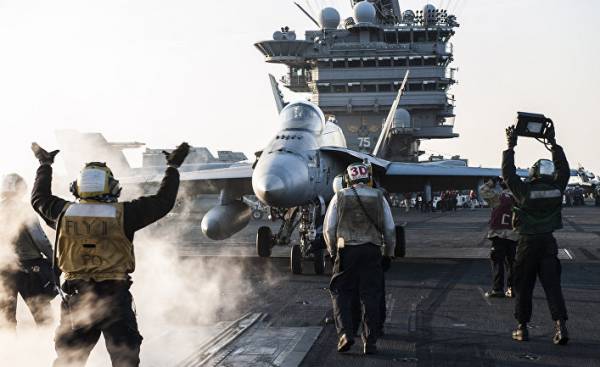 Beijing — According to Chinese officials, this year’s official growth of the military budget of China will be 7%, which is the lowest level of growth since 2010.

These figures were released ahead of annual political meetings in Beijing. This happened a few days after President trump has announced an increase in U.S. military spending by 10%.

Although, in the opinion of foreign experts, China greatly underestimates their performance, States still spend far more on defense funds, both in absolute numbers and in relation to the country’s GDP.

This year China expects to spend on the military spending of 1.3% of its GDP, as reported In Fu (Fu Ying), a spokeswoman for the National people’s Congress of China. According to estimates of the Stockholm international Institute of peace studies, in 2015 China spent on defense 1.9% of its GDP, and the US is 3.3%.

Every year China spends on its military more and more money, but the rate of growth of spending slowed. In the past year amid weakening economy, Chinese officials announced that for the first time since 2010 the growth rate was measured in single digits.

However, the slowdown was not enough to reassure China’s neighbors and the international community. As Beijing continues to promote its territorial claims in the South China sea — including constructing military infrastructure on artificial Islands, the world is closely monitoring the implementation of its plans.

Fu Ying, announced the size of military spending in 2017, did not disclose details of the budget. However, according to Chinese military experts and controlled by the Communist party newspaper, the budget increase will primarily relate to China’s Navy.

According to statements by the White house and Secretary Rex Tillerson (Rex Tillerson), the US will not allow China to seize territory in the South China sea. However, they have not reported exactly how the US will react to the creation of China’s artificial Islands.

The sharp rhetoric of the United States, combined with new plans for significant increases in military spending increase fear of the possibility of conflict.

China insists that the US does not have the right to interfere in these disputes, and regularly accuses the U.S. government of meddling in the Affairs of Asian countries. However, since joining trump as President Chinese officials have become more cautious in their statements, with an emphasis on resolution of disputes by peaceful means.

This week the representative of the Ministry of foreign Affairs of China attempted to alleviate the effect of trump’s statement that he will increase military spending by 54 billion dollars. He expressed the hope that such plans, the United States will serve to maintain stability.

China is very sensitive about criticism regarding its military spending, especially if it comes from USA.

On Saturday, Fu Ying declined to answer questions about investments in the military sphere. “Remember the last decade. During this time, the world has witnessed so many conflicts and even wars, which led to a huge number of victims and destruction have turned so many people into refugees. And from all this provoked China?” she said.

In advance of meetings to be held this week, many experts claim that the increase of the military budget is part of a long-term Chinese attempt to modernize its military, and not attempts to confront the United States.

According to him, the long-term goal of China is to “become a military power in the world-class likes of US.”

Chinese officials are not concerned about the rate of growth of military spending, said pan Guenzani (Peng Guangqian), which specializiruetsya on the study of the Chinese armed forces. “If we take care of our own security, we don’t need to compare yourself with others,” he added.

However, within the Chinese establishment also appeals to take a more aggressive stance. Do, Fu and her colleagues may have a hard time when they make the Chinese about 7% growth.

President XI Jinping (Xi Jinping) announced plans on downsizing the people’s liberation army of 300 thousand soldiers. But demobilization is unlikely to pass smoothly in February in the Chinese capital held a two-day demonstration veterans who believe that their swindled benefits.

Ahead of meetings this week, one a retired General in the Chinese army urged to boost defense spending by 12%, which, in his opinion, will allow to continue the process of modernization of the army and not to lag behind the United States.

“The US defence budget increased by 10%, and we need at least a double-digit increase. An ideal variant — an increase of 12%,” said retired Lieutenant General of the people’s liberation army Wang chunhuan (Wang Hongguang) in an interview with the South China Morning Post Friday, March 3.

Party-controlled newspaper Global Times, known for its sharply-nationalist orientation, called to increase the military budget by 10%.

“The United States is a military superpower, — is spoken in editorial article in the Global Times. But they still want to increase his army, which indicates the inevitability of further strategic unrest”.