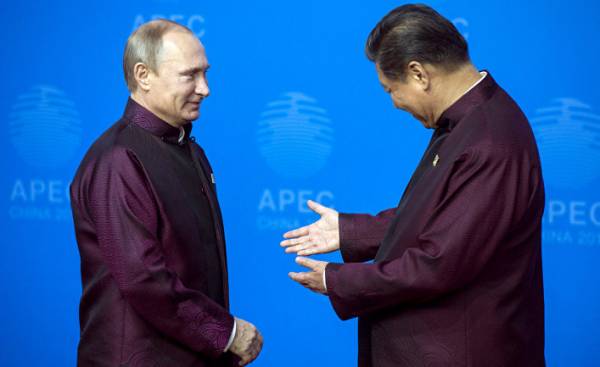 The election of the President of the United States Donald trump has created some of the experts hoped that maybe he would be able to reduce tensions between the US and Russia. The latter escalated in 2014 after Russia unilaterally annexed the Ukrainian Peninsula of Crimea and sent their military to the Eastern parts of the country to support Pro-Russian rebels. USA and other Western countries responded by imposing sanctions against Russia. President Vladimir Putin has decided that if the Western powers want to punish Moscow and try to isolate it, Russia will turn to the East. And Eastern powers gave her a warm welcome.

In the article “Asia on the side of Putin,” Trumpet editor in chief Gerald Flurry (Gerald Flurry) writes that while the Obama administration has tried to isolate Russia, “at least three billion people was not agree with this”. We are talking about the peoples of China and other Asian countries. According to Mr. Flurry, “the oppression of Ukraine by Russia and the seizure of Crimea denounced Vladimir Putin’s authoritarian dictator, what he really is. These steps made of Eastern Europe to tremble from fear, and the Western world to take in his troubled thoughts. What about China and India? These Asian powerhouses have made clear that they support Putin”.

Today, three years after the annexation of Crimea, relations between Russia and China remain sustainable. But analysts, for example, a senior researcher at the Cato Institute Doug Bando (Doug Bandow), say, President trump could and should seek to break the Russian-Chinese relationship and to drag Russia into America.

“If Donald Trump will be able to establish relations with Russia, it will hinder the creation of a common Russian-Chinese front against the United States, this is a beneficial side effect,” writes Bando. In his opinion, trump against China should follow the political model of Richard Nixon. In 1950-e and 1960-e years the Soviet Union and China waged a fierce struggle for leadership in the Communist world. The model of “triangular diplomacy”, which was used by Nixon and Secretary of state Henry Kissinger, helped them to benefit this tension and create an opportunity for rapprochement with China. This remarkable achievement has allowed US to establish closer relations with the Soviet Union and China in comparison with those that have bound themselves Asian power.

Meanwhile, the conditions of the present day are fundamentally different from those in which the act of Nixon and Kissinger. 23 Feb John van Oudenaren (John Van Oudenaren) from the Higher school of international security at the National defense University wrote in the Diplomat that any attempt by trump to use proposed by Nixon and Kissinger model of “triangular diplomacy” is doomed to failure. Mainly because of the ideological disputes that divided the Soviet Union and China before and during the presidency of Nixon, no more. Today, all possible remaining ideological differences between Moscow and Beijing overlap in their common hatred of the United States. Van Oudenaren writes:

“Both countries have a strong authoritarian nationalist hostility to the Western system of views and positions of the globalists, however, they no longer share a common Marxist-Leninist political orientation, which sowed the ideological strife during the cold war… Putin and the ruling China’s Communist party have similar views on the danger posed by Western “universal values” such as democracy and human rights. They perceive “foreign influence”, which, in their opinion, penetrate into society through globalization, the Internet / social media and NGOs [nongovernmental organizations], as a major threat to the strength of their own power within the country. For China and Russia’s ruling elite that influence is like a Trojan horse, specially created in order to foment “color revolutions”, which not only destabilisateur the country, but also contribute to regime change in “non-Western” (i.e. authoritarian) political systems.”

He further explains that Russia and China have already had occasion to observe this sort of revolutionary activity in frightening proximity from its borders. In the case of Russia it was the Ukrainian Euromaidan 2013-2014. In the case of China — the Revolution of the umbrellas in 2014 in Hong Kong.

Both Putin and China XI Jinping see the movements of such a serious threat to their own power and attribute to them the authorship of the West. Moscow and Beijing believe that such movements are proof that America, in particular, is trying to destabilize their political system and undermine their domestic legitimacy. This community views ensures that Russia and China would continue close cooperation.

As he wrote Mr. Flurry in 2014, China has “made it clear” that he supports Putin’s Russia. This marked a new stage in cooperation between the two major Asian countries. Despite changes in the political life of the United States, their cooperation and today still stands. Mr. Flurry wrote that in light of Bible prophecy the Russian-Chinese cooperation is a harbinger of bad events:

“These Asian powerhouses have made clear that they support Putin. Here we find a striking fulfillment of the Bible prophecy!… When these Asian countries is an extremely powerful nuclear powers — are beginning to show solidarity with each other on issues such as [the annexation of Crimea to Russia] that this heralds to the world? Believe me, it is the MISFORTUNE of the world. It will be a source of many serious problems. And they will affect everyone… it is Clear that Ezekiel recorded the prophecy for Russia and China and other powers tells us about the end times. It is clear that the leader of this massive Asian Alliance will be Russia. This is the key to understanding the question”.

To better understand the impact of the Russian-Chinese cooperation and how it may “affect us all”, watch the program, Mr. Flurry Key of David, the theme of which is “Russia and China combined”.