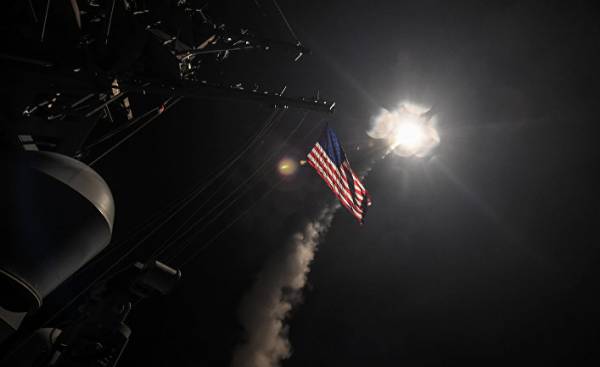 The US air force fired about 60 missiles at a Syrian military base in the province of HOMS, which, as suggested by the US, the Syrian government has made a gas attack in the Syrian province of Idlib. Russia has strongly condemned these acts: “we are Talking about international crime, designed to distract world attention from the killing of citizens in Iraq.”

In the night from Thursday to Friday, US under direct decree of the President of the United States Donald trump attacked a Syrian military base in HOMS province, which had been released the aircraft that performed a gas attack in Idlib province. About 60 rockets were fired from us warships in the course of this unprecedented operation, which were killed 6 Syrian soldiers.

World reaction was not long in coming. The US explained that we are talking about a single act, and they do not intend to contribute to the escalation of conflict: “Is the response to a heinous crime of Assad,” reported from the Pentagon.

Russia has sharply condemned the attack: “the step Washington has caused significant damage to our relations with the United States — gave the Kremlin. President Putin believes that the explosions in Syria, prevent the creation of an international coalition to combat terrorismo. A U.S. attack is illegal with regard to international law, since it is a manifestation of aggression against a sovereign state. This cynical act the US is trying to divert world attention from the killing of citizens in Iraq.”

France explained that the United States has reported about the attack in advance: “I talked with the Secretary of state in the night, — said the Minister of foreign Affairs of France Jean-Marc Ayrault. — The use of chemical weapons is awful and unacceptable, and the perpetrators must be punished.” The President of Australia supported the shelling of Syrian military bases and called on Russia to take action to achieve peace in Syria.

In England also expressed support for the United States: “the British Government fully supports the operation — said the press Secretary. Is a proper response to the barbaric use of Syrian weapons.”

In Israel, trump congratulated the attack on Syria. From the office of the government was passed that “his words and action, President trump has made it clear: the use and proliferation of chemical weapons is unacceptable. Israel fully supports the decision of the American President and hopes that this message will be heard not only in Damascus but also in Tehran, Pyongyang and other places.”

The American intervention was also pleased with some of the Syrian opposition: “We hope that Americans will continue to fight the use of prohibited weapons in accordance with international law.” Full support was expressed by Saudi Arabia. “This bold decision of President trump,” commented an informed source in the Kingdom.

The Governor of the Syrian province of HOMS Talal Barazi denounced the U.S. action: “the Americans are providing services to terrorists, — said the Governor. — Syria policy will not change. It was not the first attack, and probably not the last.” Iran also opposed the American missile strike, as reported by the Iranian news Agency.